We tend to be discouraged whenever we go through some hardships: negative thoughts fill our minds, and sometimes we think of giving up. How can we push aside this pessimism and find the strength to face trying times?

In this episode of the Ikigai Podcast, Nick and Misako Yoke discuss how people become stronger by embracing their true self with the help of Genki habits. 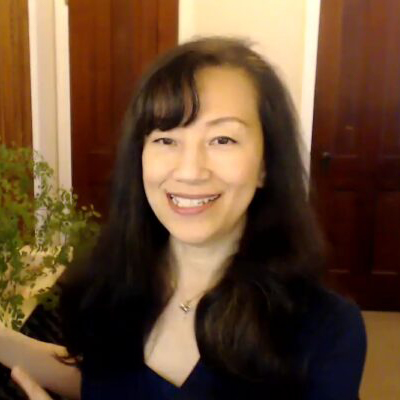 Misako Yoke is an award-winning speaker, certified Life Story Coach, and Genki Method creator. She's committed to helping people navigate through life’s challenges to remind them of their true strength; she’s also the author of Take Heart! You’re Stronger Than You Think, a book that allows readers to examine adversity through her life stories while integrating the Genki Method.

Misako wrote about the superstitious idea of hinoe uma, or the fire-horse zodiac, being the worst zodiac combination. Though she isn’t sure where the superstition originated, Misako shares that it is strongly believed in Japan that female babies born in a fire-horse zodiac will bring bad luck to their family and future husband because this zodiac only comes every 60 years. Being a fire-horse woman herself, she shares that she experienced being discriminated against because of it: her teachers would tell her that she is bad luck.

Nick was surprised to know that this superstition existed in Japan; he remembers reading an article about it, that pregnant women for that year were even forced to have an abortion, which meant lower birth rates for that year.

Being a genki person

In her book, Misako mentioned that she is a genki person, genki meaning “full of life”; she describes herself as lively, enthusiastic, and full of energy. She shares that growing up, she tried to fit into society, but it didn’t go well for her. She was often seen as the ‘weird’ one, and kids avoided her; instead of being discouraged, she used that as her motivation, embraced her weirdness, and became comfortable with herself.

Misako says that what she loves about genki is that it is often used as a spiritual way of referring to enthusiasm that is contagious, lively, and animated; she shares that she loves being called a genki person.

Life as a wife in Japan

Misako experienced some conflicts in her career when she got married. She wrote about how being a good wife in Japan means that you have to be agreeable and obedient, which is not how she sees herself. She explains that she hasn’t been to Japan for five years and hopes that things have changed, but she remembers her time there as a married woman: Everyone was assuming that she would quit her job and she was removed from leadership training; at home, she was expected to do all the housework, which she did not feel was fair. In general, she argues, this arrangement is not fair for women, because not everyone fits into these standards; when people get to a certain age, they develop their own unique character, and it’s difficult to be just obedient and not be able to have their voice.

Misako ended up getting divorced; she did work in the same company as her former husband, and when people found out about their divorce she became a madogiwazoku, which translated to “window tribe”; she explains, during her time, companies didn’t fire anybody, instead they will push people to a bad position so they will end up quitting. Misako describes it as a tormenting position, and says that it caused her to question herself about whether that was the life she wanted. This was a breakthrough moment for her, and set her on the path to travelling to different countries.

After visiting New Zealand and Australia, Misako ended up living in American Samoa, where an American man she dated helped her find an apartment. She describes this as a fun experience, as she found a second family that accepted her, helped her connect to Samoan culture, supported her in developing her writing skills, and encouraged her to sell her articles to Japanese magazines. Misako had a colorful life in American Samoa, which she describes in her book entitled Take Heart! You’re Stronger Than You Think.

Misako shares that she developed genki habits along her journey, aided by the wisdom and insights of countless people that she encountered. To make it something memorable, she used genki as an acronym with the core message is, ‘You are strongest when you are yourself; embrace your true self.’ Whatever difficulties they encounter, the genki method helps people to just be themselves.

When you are yourself, you are the strongest. Embrace your true self. - Misako Yoke 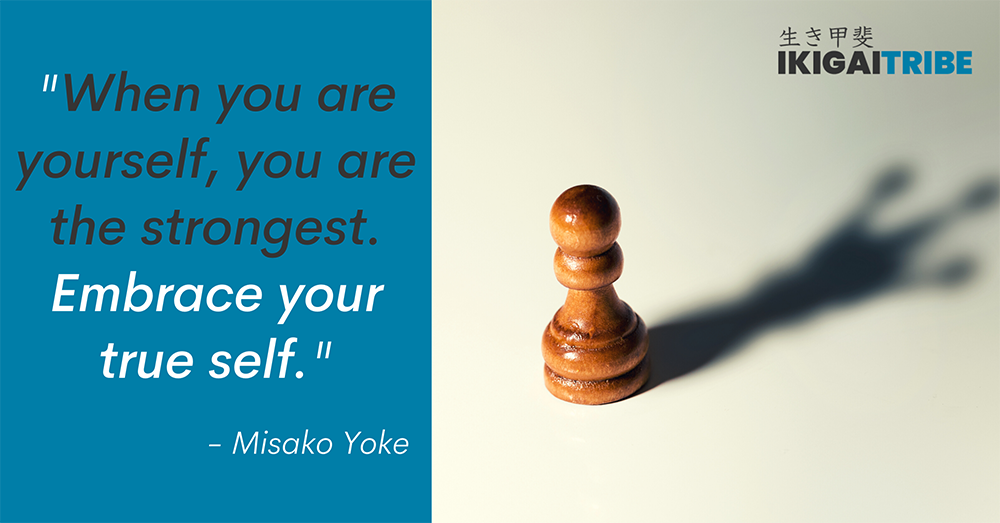 For Misako, genki stands for:

When people are experiencing something bad, instead of being horrified,

they should get some breathing room in order to not worsen the situation.

One important element that people need to remember is that when they start something new, they are a beginner again, and, understandably, they cannot be good at anything when they first start something; people should not be afraid of change, but instead should see it as a way of learning new things.

Nick says that it is like having a ‘beginner’s mind’ (a concept from Buddhism), where life will throw things at people and they have to know how to navigate through changes; they should always approach new things from a beginner’s mind, and when they do it will help them grow as a person. 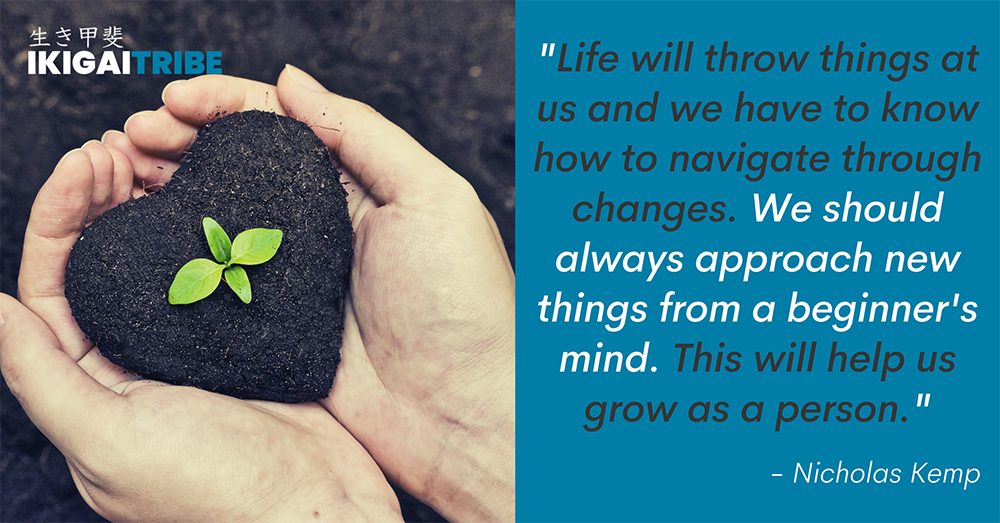 When faced with hardship, sometimes people’s minds are their own worst enemies, producing negative thoughts, and that’s why it is important to be kind to yourself rather than adding extra pain and suffering. 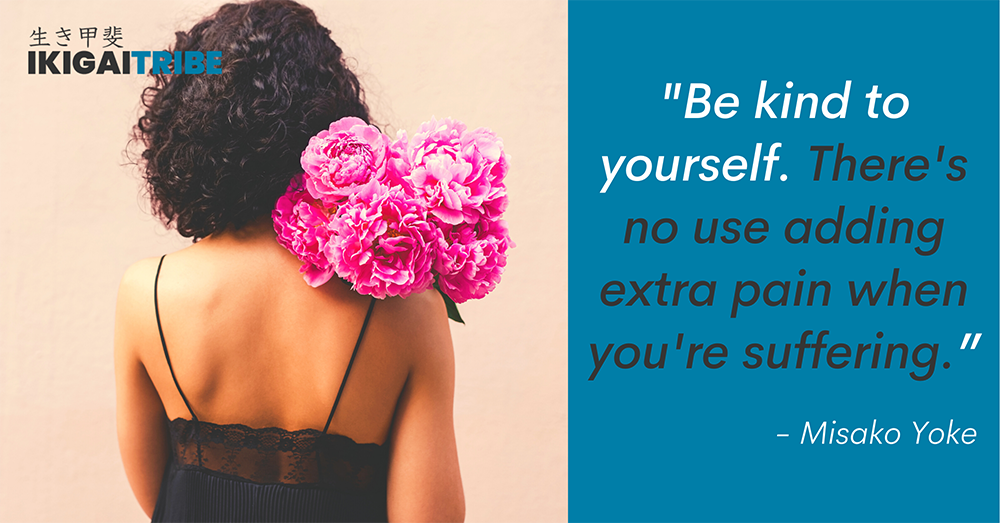 When people make a choice, they should be conscious about it; if they don’t like it, they should remember that this is their life, they are in total control, and they should change direction. This will help bring big differences in their lives.

One of Misako’s mentors shared with her the expression, “channel your inner samurai”. Misako shares that the expression helped her a lot. She  began to use it as a trigger word for herself, such that when she was faced with something unpleasant, she would immediately  remind herself, “I have samurai in me”. This is not just a metaphor: Misako is in fact a descendant of samurai and has a great love for the samurai era.

Misako also likes the expression nanakorobi yaoki, which means “fall seven times and rise eight”. This is a Japanese concept of resilience which is a big theme in her life and coaching, so it is often used in her sessions because it highlights that, no matter how many times bad things happen with people, they can pick themselves back up. She says her mom would often say that even when people are in their darkest hours, it’s only temporary -- whatever the hardships are, none of them is eternal, it’s going to pass, and there is always hope. 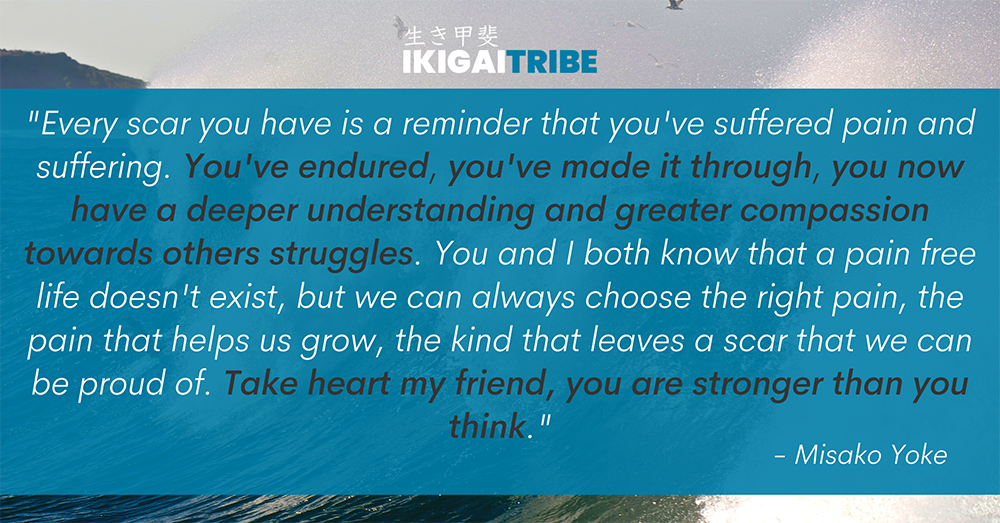 Nick then quoted something from Misako’s book which he thinks is important and very meaningful: "Every scar you have is a reminder that you've suffered the pain and the suffering. You've endured, you've made it through, you now have a deeper understanding and greater compassion towards others’ struggles. You and I both know that a pain-free life doesn't exist, but we can always choose the right pain, the pain that helps us grow, the kind that leaves a scar that we can be proud of. Take heart, my friend, you are stronger than you think."

There is always hope even in the most grueling times of our lives. We are the only ones responsible for our own lives and so we should take care to live them the way that we want rather than the way others think we should. We may experience difficulties along the way, but that just allows us to grow and know ourselves better. There is no need to give up because these difficult times can help us find the right direction to take with our lives, and can lead us to know and embrace ourselves so that we can find our ikigai.