In 2009, National Geographic Fellow, Dan Buettner delivered a TED Talk entitled How to live to be 100+. In his presentation, he discussed ‘blue zones’ (also the topic of his book by the same name): the five places in the world that had the highest concentration of centenarians, where people lived the longest, and where residents were the healthiest:

Buettner linked Okinawan lifespan to diet, lifestyle, and the then little-known concept of ikigai that he helped to introduce to a Western audience. He said:

‘In the Okinawan language there is not even a word for retirement. Instead, there is one word that imbues your entire life, and that word is “ikigai”. And, roughly translated, means “the reason for which you wake up in the morning.”’

Ever since, Westerners have had a tendency to (inappropriately) connect ikigai to longevity in general and to the longevity of Okinawans in particular. You can find these references in many books, other TED Talks, and thousands of blog posts, which have perpetuated this myth.

While it may be true that Uchinaaguchi, the indigenous language of Okinawa, has no word for ‘retirement’, ikigai is not a word from Okinawa, but, rather, a common word in the Japanese language.

It is worth noting that many Okinawan centenarians do report having a strong sense of ikigai – as explored in the international best-selling book, Ikigai: The Japanese Secret to a Long and Happy Life, by Hector Garcia and Francesc Miralles. Although this by no means indicates that ikigai is a secret life hack to become a youthful centenarian, it does raise the question of whether and how ikigai might influence physical health and wellbeing.

The Health Benefits of Ikigai

This is something I explored with Dr Yasuhiro Kotera, the Associate Professor in Mental Health at the University of Nottingham. Kotera and his colleagues investigated the health benefits of ikigai, finding evidence that a strong sense of ikigai may reduce ‘allostatic load’ – wear and tear on the body.

In my conversation with Kotera on my podcast, he explained that ikigai can reduce the tiredness and fatigue that can lead to conditions such as cardiovascular disease and other stress-related health problems.

Kotera also said that people who have ikigai are likely to engage in self-care behaviours such as exercise and healthy eating (as described by Buettner in his TED Talk), which further reduce the likelihood of poor health. There is also a virtuous cycle whereby those who take better care of themselves have better mental health, and better mental health leads to healthier behaviours.

Yet not all ikigai (sources) are healthy. Depending on the person, their ikigai source could include alcohol, cigarettes or even a vice that is likely to shorten their lifespan than increase their lifespan.

Beer Counts As My Ikigai

As shared in the The Economist Professor Nobuhiko Kanda, a psychologist who has researched the history and etymology of ikigai stated. “If I decide to sneak out of a lecture to have a beer, that counts as my ikigai.”

In all my conversations with my many Japanese friends, not one ever mentioned ikigai as being something to do with longevity. Most mentioned hobbies or small rituals that gave them a sense of freedom or purpose.

While pleasant to imagine, romanticising ikigai as merely a tranquil lifestyle restricted to one Japanese island prevents us from discovering what ikigai truly is and how it manifests in, and impacts on, Japanese culture. Likewise, it is diminished if we simply think of it as the secret to longevity; after all, while ikigai can give you the motivation to live, and perhaps make your life more enjoyable, it can’t guarantee that you’ll live to be 100 even if you do live in Okinawa. 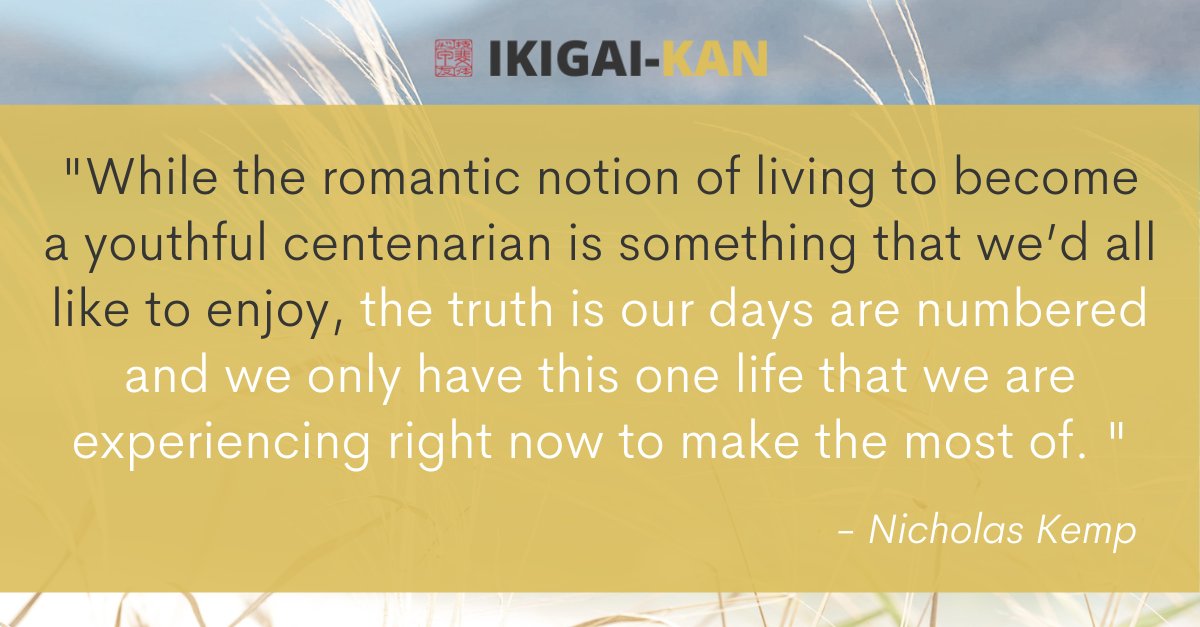 Okinawa - Now The Least Healthy Prefecture In All of Japan.

“The place that has been hit the worst is Okinawa…I first went there in 1999….At the time it was producing the longest lived people in the history of the world. Now it is the least healthy prefecture in all of Japan. It’s got the highest rates of obesity, the highest rates of diabetes, and it has undergone the worst degeneration of any of the Blue Zones.”

According to Buettner, in 1999 Okinawa was producing the longest-lived people in the history of the world. Tragically, today Okinawa is now the least healthy prefecture in all of Japan. On the Rich Roll podcast in March of 2020, Buettner revealed that due to the introduction of the Western diet, Okinawa has suffered the worst degeneration of all five Blue Zones, and now has the highest rates of obesity and diabetes.

What was once the island of longevity is now Japan’s island of obesity and diabetes.