Mieko Kamiya could be called the Mother of Ikigai Psychology. She was one of the first researchers to extensively study ikigai. Her seminal book, Ikigai-ni-Tsuite (What Makes Our Life Worth Living) is still considered standard by current-day Japanese researchers, professors, and psychologists, despite it being published in 1966. Unfortunately, her book is yet to be translated into English. Even more unfortunate is that Kamiya died at the ripe young age of 65 in 1979.

“It seems that the word ikigai exists only in the Japanese language. The fact that this word exists should indicate that the goal to live, its meaning and value within the daily life of the Japanese soul has been problematized. (…) According to the dictionary, ikigai means “power necessary for one to live in this world, happiness to be alive, benefit, effectiveness.” When we try to translate it into English, German, French etc, it seems that there is no other way to define it other than “worth living” or “value or meaning to live”. Thus, compared to philosophical theoretical concepts, the word ikigai shows us how much the Japanese language is ambiguous, but because of this it has an effect of reverberation and amplitude.”– M​iekoKamiya

This translated quote comes from the first opening paragraph of the book. In her book, Ikigai ni Tsuite, Kamiya described ikigai as a type of happiness, but with an essential element of feeling that your life is moving forward. She wrote that we feel ikigai the most when the things we most want to do in life are also our obligations or duties. And the most honest aspect of our ikigai are our feelings. 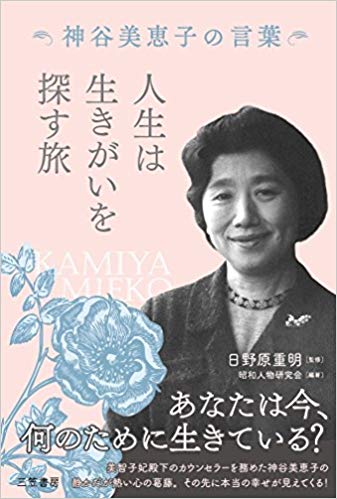 Kamiya was a woman of many roles and talents. Not only was she a doctor, psychiatrist, author, and translator, but also a hardworking housewife and a mother to two children. She spoke and taught several foreign languages including, French and English. As a translator, she translated Meditations of Marcus Aurelius into Japanese. She taught psychiatry at several Japanese universities and was also a private tutor to Princess Mishiko, who served as the Empress consort of Japan until 2019.

In Japan, she is recognized as a doctor who treated psychiatric patients, including leprosy sufferers at Nagashima Aiseien Leprosarium. Of those who do know her in Japan many believe Kamiya regarded her service to leprosy patients as her life’s most important work. However, this is not true. She went to Nagashima Aiseien Leprosarium to conduct a survey for a psychiatric research project.

It was from the interviews with leprosy patients at Nagashima Aiseien Leprosarium that she theorized her model of ikigai. Kamiya discovered that many patients with relatively light symptoms suffered from a sense of meaninglessness in their lives. This stimulated her into thinking about the question; “What makes one feel that life is worth living?”. Out of it grew the dissertation for which she received her doctorate from Osaka University in 1960.

This eventually resulted in the writing of her first and most important book, Ikigai-ni-Tsuite (What Makes Our Life Worth Living), published in 1966. For Kamiya Mieko, writing was her ikigai. It was a lifelong ambition of hers to write, and one she was unable to pursue until the later years of her life. Thankfully Mieko kept a diary, which has been published, where we can confirm her joy and sense of purpose she experienced from writing.

Upon completing the first draft of her book, Ikigai-ni-Tsuite, she wrote in her diary:
“At last this is the last day of the summer vacation. While making preparations for the resumption of classes, I looked back over this summer in which I was completely absorbed in writing my book. As my writing progressed over the summer, it became more and more evident that this was my most important task. I could almost say that I had been living just to write this book. What surprise, joy, and awe I felt as I gradually came to discover that. I had never even really imagined the possibility that the meaning of my life would someday be gradually revealed to me in this way.”

These words show her ikigai was indeed writing. It was far more important to her than her work as a doctor and gave her great satisfaction.

“There are two ways of using the word ikigai. When someone says “this child is my ikigai,” it refers to the ​source ​or ​target of the ikigai,….. and when one feels ikigai as a state of mind ​- ikigai-kan.​” – Kamiya Mieko

She related ikigai-kan to Viktor Fankl’s meaning of life, and believed sources of ikigai should be consistent with people’s identity that allows them to express their true self.

In her book, Ikigai ni Tsuite, Kamiya asserted that for an individual to experience ikigai-kan seven types of personal needs to be satisfied.

These seven needs are:

Kamiya pointed out that depending on each individual, the desire and combination of these needs required in order to experience ikigai awareness would vary from person to person. Also, all seven needs didn’t need to be satisfied, that the combination of these needs would be different depending on each ikigai source, and many people would have needs other than these seven.

What should be understood is these were the top seven needs that she discovered were of the most importance to patients she treated who had suffered “a serious loss of ikigai”. It is interesting, and perhaps not surprising to note that these seven needs are very similar to the psychological and self-fulfillment needs of Maslow’s hierarchy of needs – love and belonging, feeling of accomplishment and self-esteem.

You can learn more about Mieko Kamiya’s theory of Ikigai in the Ikigai Ebook.