The Japanese have a rich culture that often seems mysterious to outsiders and prompts them to undertake research -- which often yields knowledge which can be useful in daily living. Japanese wisdom covers all aspects of life, from traditional arts to their daily activities such as walking. For example, they engage in something called nanba walking -- but what exactly is that?

In this episode of The Ikigai Podcast, join Nick and his guest, William Reed, as they discuss the art of nanba walking and how it can be beneficial in our daily lives. 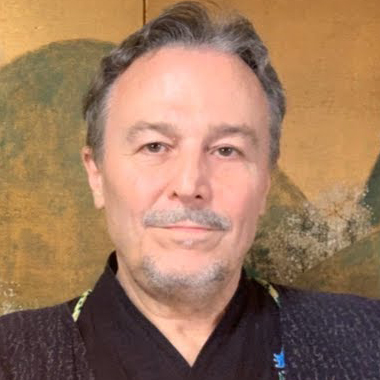 William Reed is an author and Japanologist with over four decades of experience in Japan; he is a bilingual professional communicator, dedicated to sharing practical wisdom from Japanese culture through teaching, speaking, and writing, and also holds a master teacher rank in nanba walking.

William shares that he first went to Japan at the age of 20 and has been learning new things about the culture ever since. There are so many layers to Japanese culture that there is always something to pique his curiosity and that’s what keeps him there.

William has achieved many accolades while in Japan: for example, he has an eight degree black belt in aikido, 10th dan in shodo (brush calligraphy), and 7th dan in small brush calligraphy. William relates his many credentials and certifications to the idea of having “a lot of rings around the tree”: He compares it to a willow tree, saying: “Be like a willow tree; it’s got deep roots, a firm trunk, and very flexible branches. It just lets the wind pass through and makes a wonderful sound; you’ve got to have a combination of rootedness, strength and softness because the wind doesn’t always blow in the way you’d like it to -- it’s going to snap the branches.” 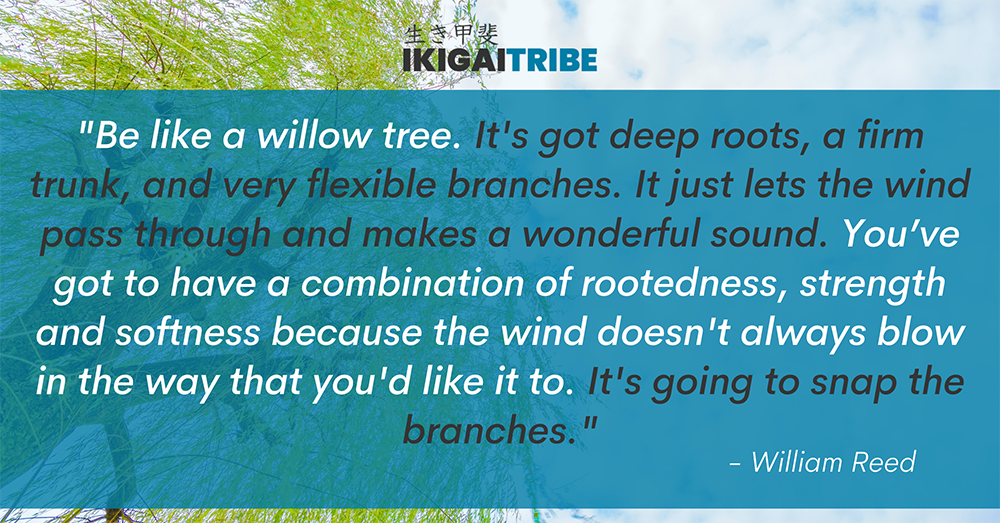 Nick shares that his conversation with William brought him an interest in aspects of Japanese culture that are neglected: things like kanji, learning more proverbs, and parts of the Japanese language. Studying the Japanese language is difficult and takes years to master, says William. However, people can also have a deep understanding of it without speaking grammatically correct Japanese by focusing on the etymology of the words, giving it a good English explanation, and looking at the meaning of the kanji.

So what’s the meaning of the word nanba?

William explains that nanba is ordinarily written in katakana (phonetic alphabet). The kanji associated with it are nan (difficult) and ba (place), so it’s a difficult place or trouble spot, and the full definition of nanba is that it is the art of physical finesse that enables one to get out of trouble spots.

The full definition of Nanba is that it is the art of physical finesse that enables one to get out of trouble spots. - William Reed 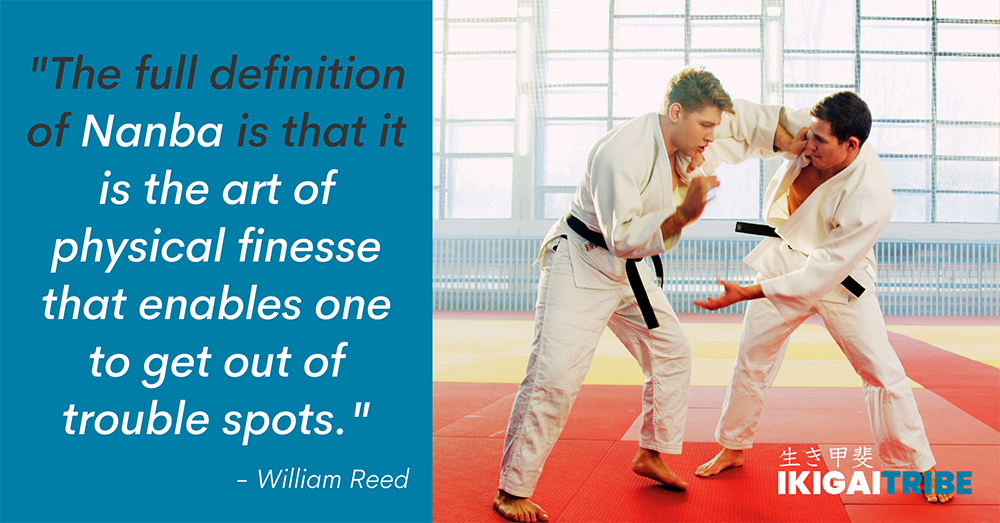 Nanba aruki is the Japanese word for nanba walking. William explains that it means moving with soft steps and small strides; it is described as a ninja or samurai walk -- people don’t make waves when they enter the space. To explain further, he differentiates it from gendai (modern) walking:

Nanba walking originated from the old times where Japanese people wore kimonos and used wooden clogs as their footwear, and in order to maintain their posture, they learned to walk with minimal movements. William shares that nanba style movements are visible in all Japanese traditional martial arts and crafts.

How William got into nanba

William shares that when he was training in aikido, his sensei demonstrated the nanba walking or samurai walk, as his sensei calls it; that attracted William to find out more about nanba, and while doing his research, he discovered that there is a professor at Toho Gakuen, Japan’s largest conservatory of music, who teaches nanba to his students. William decided to join the class, and years later, he was asked to teach at the same institution. Because he was also practicing tap dance at that time, William taught nanba tap at Toho Gakuen for four years.

William says that a lot of Japanese people use nanba to achieve great results; in the year 1876, German doctor Erwin Balz came to Japan and became the physician for the major emperor. Balz wrote in his diary about the jinrikisha (rickshaw), a person-powered carriage; he would hire a jinrikisha and go long distances. Normally, they would have to change horses six times to do it, but with jinrikisha, it only took him 27 hours to complete his journey. He was astounded with how the Japanese people were able to do it; they have nanba technique which enables them to perform their tasks simply.

Professional athletes also use nanba technique to attain world-class results. For example, in 1932 Los Angeles Olympics, the Japanese won various medals in swimming; in 2000 Sydney Olympics, Takahasi Naoko, a great marathon runner, won a gold medal; and in 2008 Beijing Olympics, Japanese sprinter Suetsugu Shingo won a bronze medal; all of them excelled in their own areas using the nanba technique.

As mentioned, William studied nanba at Toho Gakuen; the name of his instructor is Yano Tatsuhiko, or Yano sensei. William shares that Yano was trained as a physical education teacher. However, to teach physical education in a conservatory of music, a lot of sports are prohibited to avoid injuries to students. Initially, he focused on track and field and swimming, then he tried and experimented with yoga, Feldenkrais, and Alexander technique. Still, because students spend so much time practicing their instruments, they don’t have time to exercise much; they want something that they can do while they are rehearsing. So, Yano adapted the nanba technique and created a curriculum.

There are three parts to the curriculum: nanba balanced exercises, nanba flow exercises, and nanba walking.

Nanba walking - moving with soft steps and small strides; it is best practiced outdoors, and sometimes people keep a notebook with them to note their insights, and some would take photos of what they notice while walking, which has mental benefits.

There are three benefits in Nanba Training. One is the ability to do self-tuning, next is accelerated mastery, and the last one which we all need is enhanced energy. - William Reed 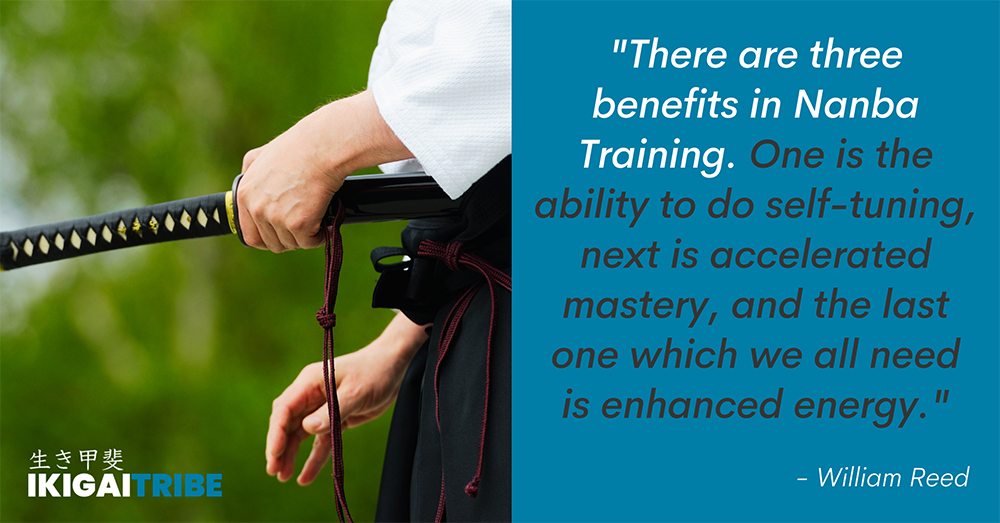 William states that there are three benefits in nanba training: the ability to do self-tuning, accelerated mastery, and enhanced energy.

When one does nanba training, it is important to be physically, emotionally, and spiritually present -- the engagement of the head, heart, and body.

Nanba is William’s ikiga; he shares that he keeps coming back to it because it is inexhaustible; he’s been practicing it for about 15 years -- there's always a new insight that comes from it, even though it may look to be repeating the same thing on the outside. 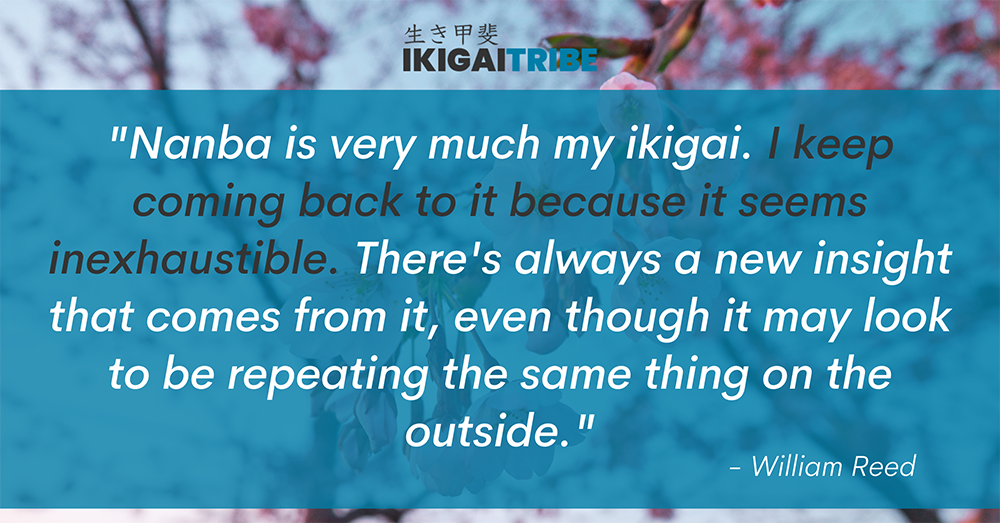 Nanba walking is not just an activity for physical wellness; it can also help us feel spiritually and emotionally present; it gives us an opportunity to think of what really matters in our lives that allows us to engage more in activities that will bring us ikigai. Whenever we feel tense, we can do nanba walking to help us relax and feel better -- our heart, mind, and body working in unison.