What practices will enable us to experience continuous improvement? Or, to phrase the question another way, what steps do we need to take to achieve goals associated with enhancing our abilities and achieving excellence at our craft?

In this episode of the Ikigai Podcast, Nick talks to Bob Emiliani about the use of kaizen to improve one’s performance and increase productivity. 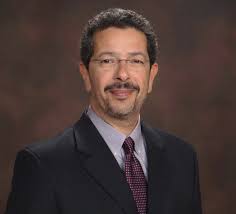 Bob Emiliani is an engineer, researcher, author, educational reformer, executive coach, and historian of progressive management; he’s also a longtime “Toyota Production System” (TPS) and Lean practitioner, and the first to focus on Lean Leadership as an area of scholarly study. He has co-authored 22 books, one of which is Kaizen Forever: Teachings of Chihiro Nakao.

Bob shares that the first time he encountered the term kaizen was when he read a book about it by Masaaki Imai back in 1993. He was working as an engineer at that time; a year after, he shifted to manufacturing to become a business unit manager working with a new General Manager. This was when he first participated in kaizen.

Bob says that it was an eye-opening occurrence -- all the highly educated and experienced people in manufacturing participated; two consultants taught them how to simplify their work, and made it easier for them to get the flow of information which resulted in better quality and fewer troubles. Bob shares that it was mind-boggling, saying: “One thing that struck me was, for all the education that I’ve had, and all the teachers that tell you their main goal is to teach critical thinking, it’s like I learned more in that one-week kaizen with shingijutsu about critical thinking [than I had ever learned through my Ph.D.]” 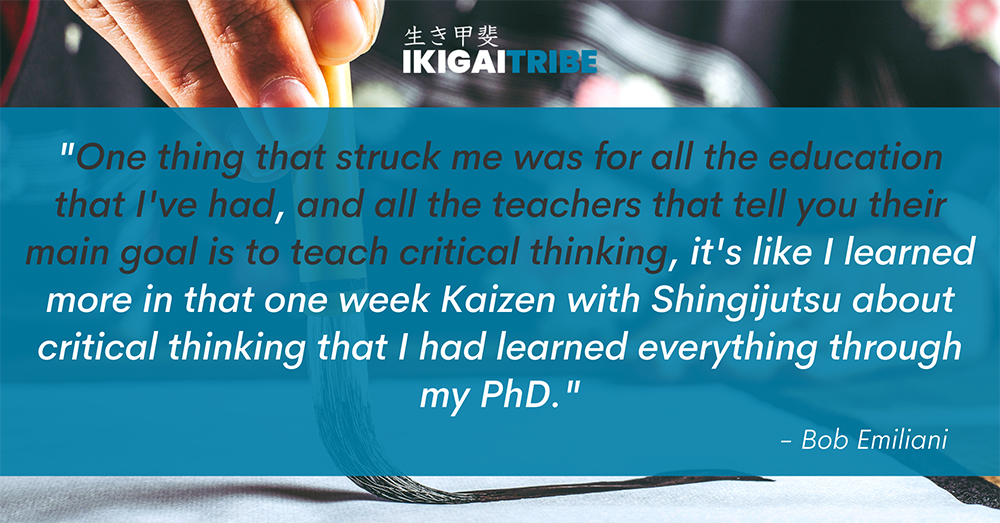 According to Bob, he and other managers would go to dinner with the sensei, together with the interpreter, and that’s where they really learned the philosophy of kaizen and made the connection between kaizen and humanity, and their responsibilities as employees.

Bob co-authored the book Kaizen Forever: Teachings of Chihiro Nakao, a book about kaizen teachings. Bob says that he wrote the book for anyone who wants to learn how to think better, through the process of “learning by doing”; his goal is to reach younger generations, to inspire them to learn and practice kaizen and achieve flow.

Nick and Bob talk about one of the principles of kaizen mentioned in Bob’s book: that there are no limitations to where kaizen can be applied; any type of business or organization in any industry can benefit from kaizen. Bob explains that in any kind of work, be it at people’s workplace or home, they have an objective in mind on what job they have to get done, then through the course of the day, something unexpected might happen that will hinder their plan; there’s a gap between the plan and the actual, and that should be something that triggers a recognition that there’s a problem, and if there’s a problem, that should put them in a form of kaizen, which they should plan, do, study, and adjust to solve their problem -- to recognize the problem and come up with ideas. Any type of industry that experiences that type of problem can make use of kaizen.

One of the terms mentioned in Bob’s book is shingijutsu. Bob explains that shingijutsu is the name of a company that was formed at the behest of Taiichi Ohno, an executive in charge of operations at different levels during his career at Toyota; he was one of the people leading the creation of Toyota’s production system. Bob says shingijutsu means new technology and a new way to manage an organization to improve people’s work.

Nick shares that one of the expressions in Bob’s book that caught his attention was: “Thinking by using hands and looking by using feet”.

Bob explains, “thinking by using hands” means to get involved and do the job; people can only learn when they do get involved -- learning that comes from working with their hands and gaining an understanding that is greater than the the intellectual one that comes from listening to others or reading a book; “learning by using feet” means to go to the actual place where the work is performed and experience it firsthand -- the practical application of knowledge. He says that what kaizen does is to bring craftsmanship back in the workplace to improve what workers do and to make work more interesting for them.

Bob introduces two other terms, shumilation and try-storming. He explains that shumi means “hobby”, and shumilation is getting people energized and motivated about making a hobby of trying things. Try-storming is what his sensei suggests to do instead of brainstorming. With brainstorming, the tendency is to agree to a single idea without first being certain that it will work; in try-storming, on the other hand, you think of multiple ideas and try each idea to see what will work best.

If you improve in one area but make life difficult for somebody upstream or downstream, then that's not improvement. You haven't achieved Kaizen. - Bob Emiliani 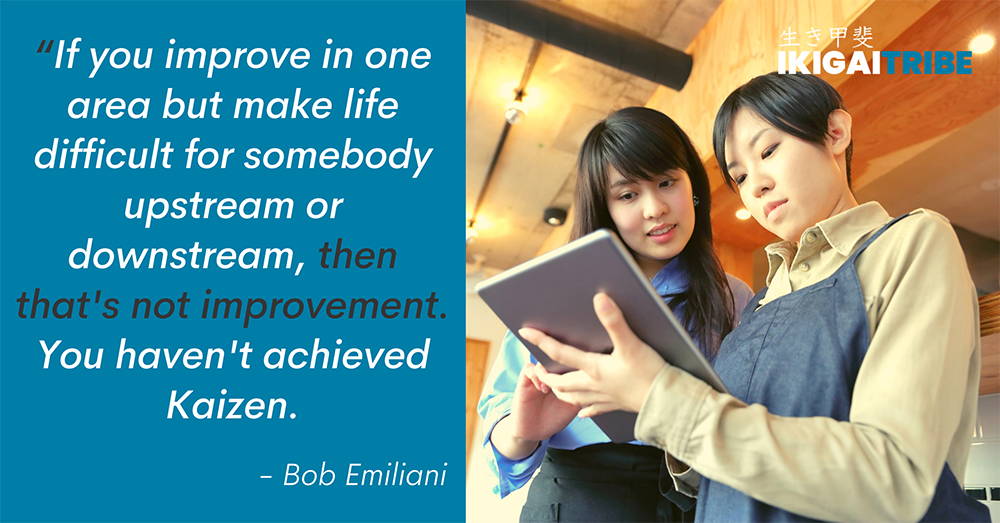 Kaizen is only realised if the whole business improves; if one aspect suffers -- if people improve in one area but make life difficult for somebody upstream or downstream -- then kaizen has not been achieved. The idea of kaizen is that everyone benefits and finds it easier to do work. 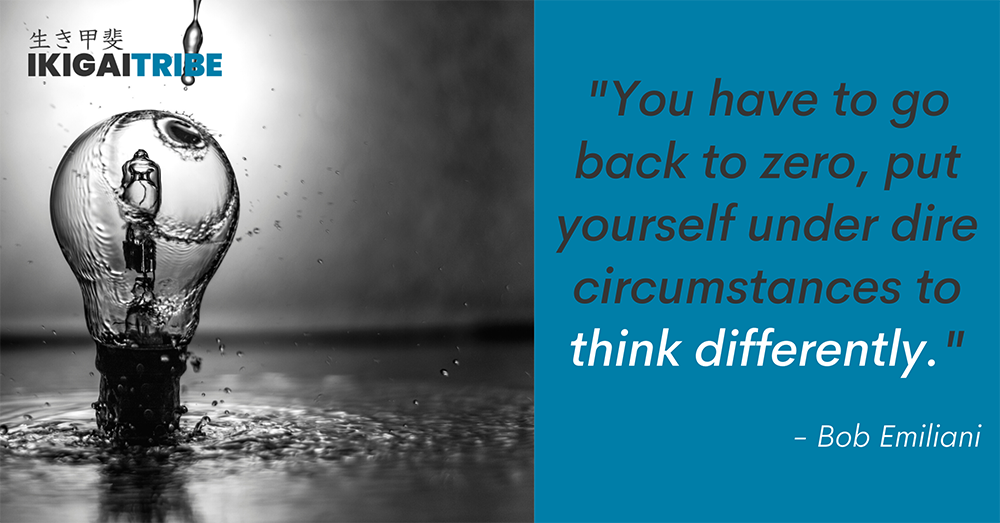 Nick quoted something the sensei said about teachings on people which he finds very powerful: “You have to go back to zero, put yourself under dire circumstances to think differently”.

Bob says that kaizen revolves around being able to break free of preconceptions; people are doomed to failure if they don’t initiate daily destruction of their preconceptions, and as his sensei says people have to think like a child who’s always curious about learning.

Teachings on the process

Bob explains that ‘teachings on the process’ is understanding what the function is and just performing that in the workflow without all the extraneous stuff, no need to make things complicated; when given a task, people tend to elaborate and make it complex, whereas they were just given a simple task and they can solve it without making it intricate.

‘Teachings on equipment’ means that computers kill people’s ability to think because, when they need to do a task, they rely on computers. Bob says there’s a different level of learning that comes from taking notes; academicians studied computerized note-taking in class versus handwritten note-taking, and the results are significantly better with handwritten notes than it is with a student typing on a computer to take notes.

Bob shares that what he learned from ‘teachings on space’ is to eliminate preconceived notions; in terms of space, people are more likely to buy equipment that takes up a huge space just to do small tasks. A huge space costs money and increases people’s expenses, so it is necessary to have the right-size equipment that can create a workflow done in a small space, to populate more productive work areas and be able to satisfy customers better.

In ‘teachings of money’, the sensei said that it feels good to spend money, and people should stop it; Bob explains that what the sensei is saying is that people have to break the habit of spending money and instead be judicious and avoid buying unnecessary stuff.

“Not enough people ate fish eyes, that is why there are so many concrete heads.”

Bob explains that some people have concrete heads or are thick-headed, that they don’t see the light; so fish eyes have something good for brain health, a vitamin that is good for brainpower.

‘Teachings on information’ is about overthinking, which causes stress and worry. According to Bob, humans infer the existence of threats in environments -- like the workplace -- that are not natural to them. As a result, they end up being stressed and lose their focus. Kaizen makes people feel good about themselves and reduces the feeling of being stressed out; it can therefore be something that improves human health and helps people to leave work healthier than when they arrived.

Nick then shares a paragraph from Bob’s book: 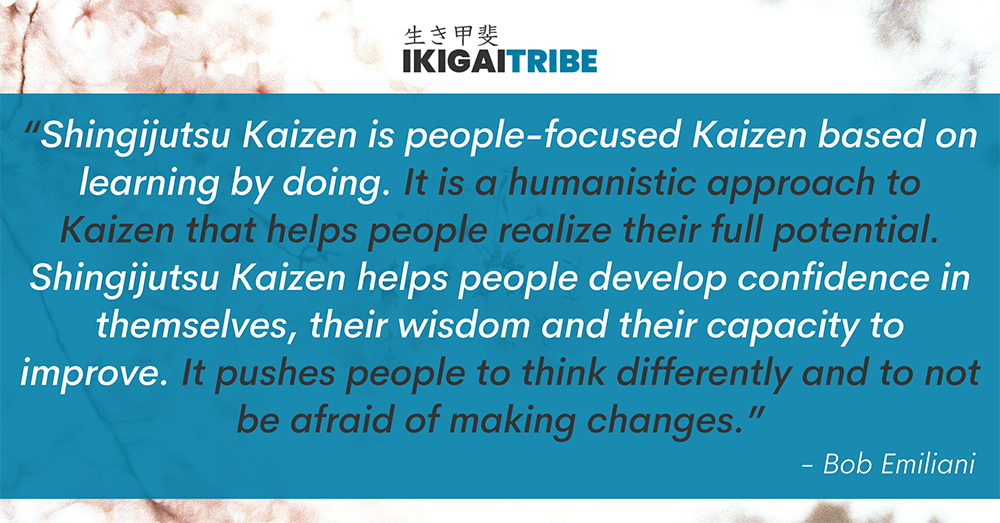 “Shingijutsu kaizen is people-focused kaizen based on learning by doing it, is a humanistic approach to kaizen that helps people realise their full potential. shingijutsu kaizen helps people develop confidence in themselves, their wisdom, and their capacity to improve. It pushes people to think differently and to not be afraid of making changes.”

Bob says that one of the purposes of kaizen is simplification, to make work easier; when work is simplified, there are fewer chances for mistakes. People will understand through kaizen that if they blame others for problems and mistakes, they won’t get their creativity, ideas, and ingenuity.

How people can apply kaizen

Bob says that kaizen pushes people to think differently and not be afraid of making changes.

You must do lots of trial and error, don't consider error as a failure, never give up. - Chihiro Nakao 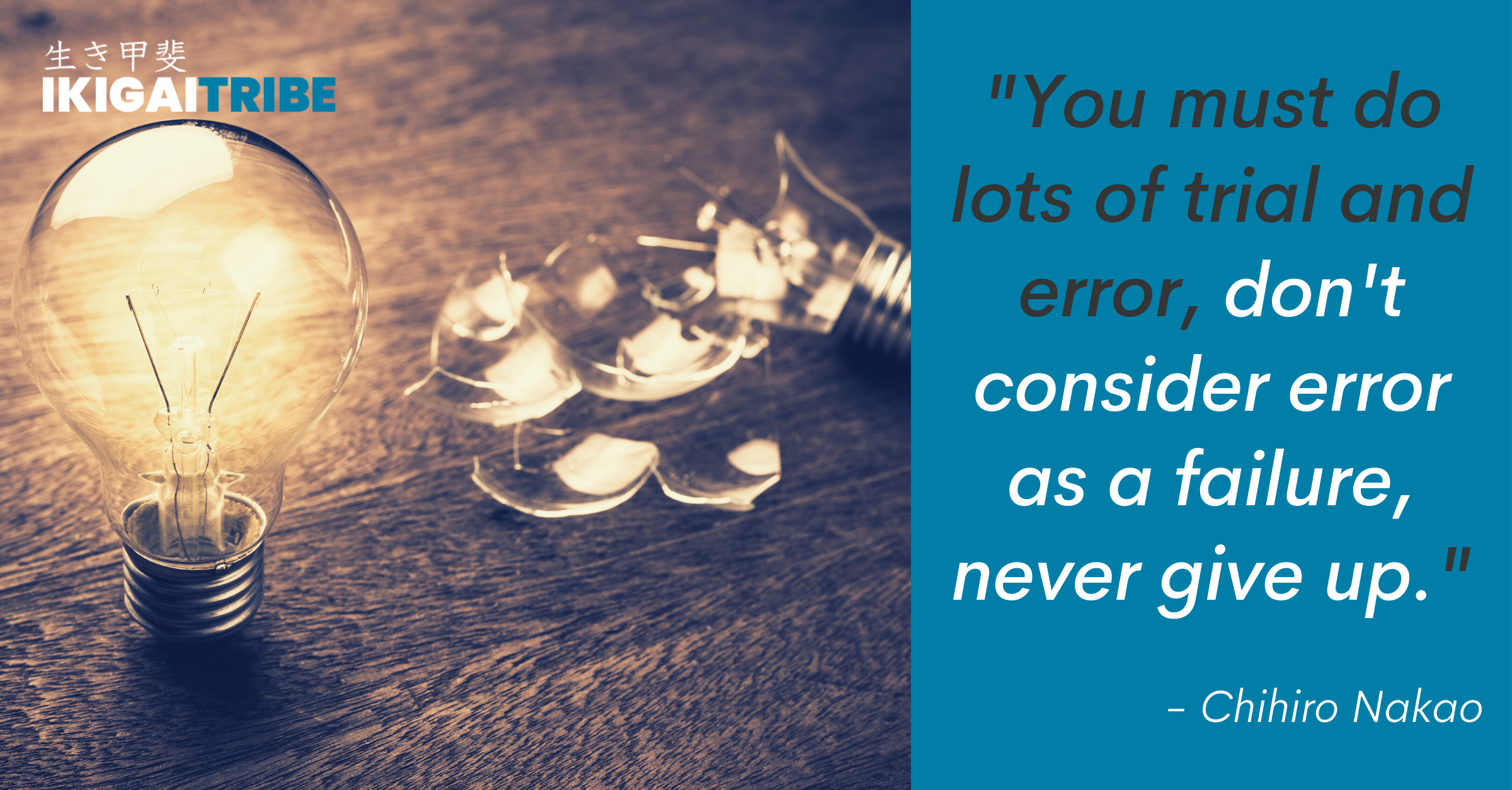 Nick quoted the sensei, saying, ‘You must do lots of trial and error, don't consider error as a failure, never give up.’ Bob says that the sensei teaches them to be brave and try out new things; he encourages and believes in them because he’s seen for decades that people can do amazing things with their intelligence and their heart. When kaizen stops, everything stops; it is important to keep going and keep on trying.

We all have the desire to experience continuous improvement, and this can be aided by the concept of kaizen. It teaches us to embrace change rather than be afraid of it, and gives us the ability to solve problems in simpler ways rather than make things complicated. This helps us to be more productive, it spurs us onward, and it encourages us to keep on trying until we achieve our goals.