Swords aren’t only used for battles or weapons for killings; they can also be applied as a form of art, while others collect swords as a hobby. Because swords can bring personal pleasure, they can be a source of ikigai.

In this episode of the Ikigai Podcast, join Nick with his guest Saneteru “Steven” Radzikowski as they discuss the beauty of swordsmanship. 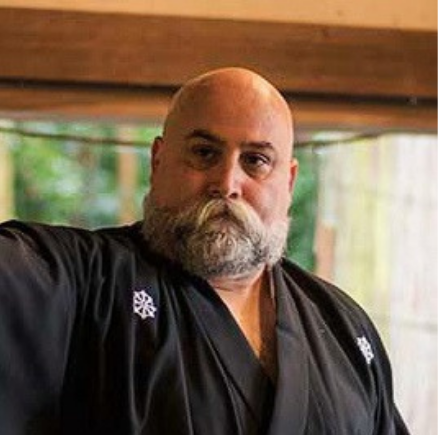 Saneteru “Steven” Radzikowski is the founder and current head instructor of Shinkan-ryu Kenpo, a unique style of classical Japanese swordsmanship. He has been practicing various forms of martial arts for 26 years and has been teaching for 20 years. He owns a dojo headquartered out of Nara, Japan; its teachings center on the authentic and correct swordsmanship of pre-modern Japan, and the spiritual development and character refinement of the swordsman.

Steven began his journey with martial arts in 1993, doing Yang family tai chi chuan (internal Chinese martial art), and moving on to kendo and iaido in 2003; he then moved to Japan in 2010 to continue his practice. He shares that being involved in Kendo is what led him to Japan.

Besides the abovementioned martial arts, Steven also studied iaijutsu, jojutsu, kendo, and kenjutsu. He explains that kenjutsu and iaijutsu are forms of swordsmanship, and kendo is a modern version of kenjutsu. Jojutsu, on the other hand, makes use of a hardwood staff that’s over a meter long.

Steven shares that what made him interested in tai chi was the aspect of working with an energy of somebody else [i.e., during sparring], which provides deeper understanding than when working alone. This is something that he carried over when he started doing kendo. He says that once people start engaging in matches, they are better able to notice many aspects of the techniques, including their own limitations.

Steven’s bumei (martial arts name) is Saneteru, which means ‘one who spreads the truth’. This is derived from his Buddhist name, Sacharatna (‘jewel of truth’). He explains that Japanese people have a history of transforming their names for all sorts of occasions: for example, when they come of age, attain a new rank, or become a monk. It’s sort of dropping a new anchor in their lives -- they still have the original anchor where they came from, but as they go through a new voyage, they become a different person.

In 2002, Steven was involved with supporting monks. He found that he had a longing to do something non-secular, and that he desired to pursue the Buddhist way of life and live at a temple, and then a monastery.

Steven founded a style of swordsmanship called  Shinkan-ryu Kenpo. He shares that he felt that something was missing from the arts that he studied; he expanded on what he had learned, constructed and added new moves that both build on but still resemble the original -- for which reason he does not consider it a whole new style.

"Shinkan-ryu kenpo takes the ideas of munen (non-worldly thoughts), which is a Buddhist concept, and attempts to pierce the fog of mental constructs to show the real truth of our minds and the world. The techniques of the sword and mind are shared at the same level.

"One does not develop only the sword without the mind in the true tradition of Shinkan-ryu kenpo."

He explains that he notices how, in martial arts, people tend to see only the techniques being used, and not the character development and spirituality which underpin them. He thinks that it is important to incorporate both of these in training.

Aside from his physical school in Japan, Steven also conducts lessons online. He has at least 500 videos showing techniques, philosophies, and detailed explanations of the weapons used in swordplay. He shares that, at first, it wasn’t his aim to teach online; it just happened that he uploaded many videos demonstrating the art of sword fighting, and then began to receive many messages from people who were interested in learning more. He admits that it is not easy to teach online, though he thinks he has found a good method for doing so.Some of his students visit Japan to practice with him face-to-face, demonstrating that he has been able to create an intimate relationship with each of his students.

Mushin is a shortened term from Mushin no Shin, which means mind with no mind. And No Mind means you're still thinking but you're not intellectualizing what's coming through the ears, nose, and eyes. It is simply kind of turning off all of that judging and everything. Unfiltered things are just passing through our nervous system. - Sanateru Rodzekowski 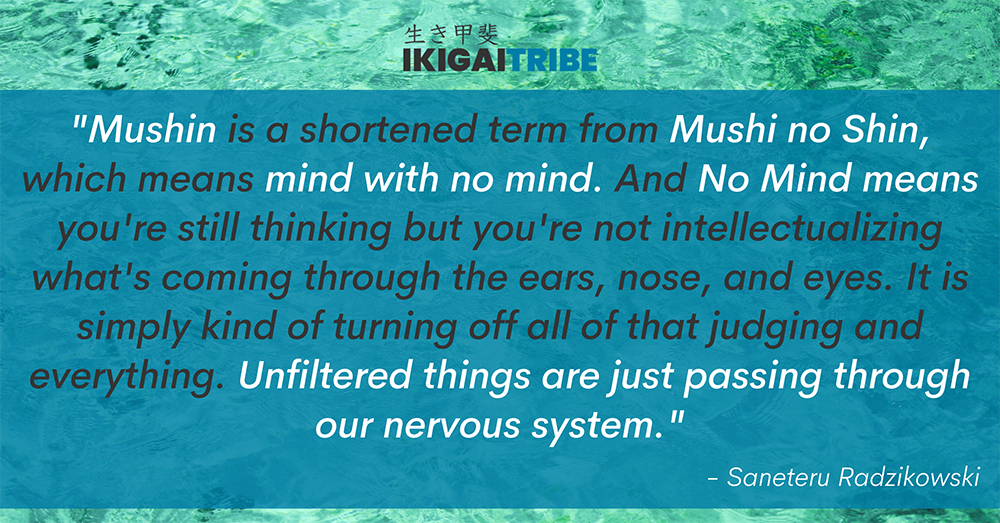 Nick shares that the reason why he reached out to Steven is because of Steven’s video about Mushin no Shin. Steven explains that mushin is a shortened term from Mushin no Shin (mind with no mind); “no mind” means you’re still thinking but you’re not intellectualizing what’s coming through the ears, nose, and eyes. It is simply turning off all of the judging and allowing unfiltered experiences to pass through our nervous system.

Shinkan-ryu Kenpo is Steven’s ikigai. He explains that he doesn’t do it for money, but rather because it gives him a sense of fulfillment to talk to his students every day; he finds harmony with his life and work -- they meld together without distinct boundaries. 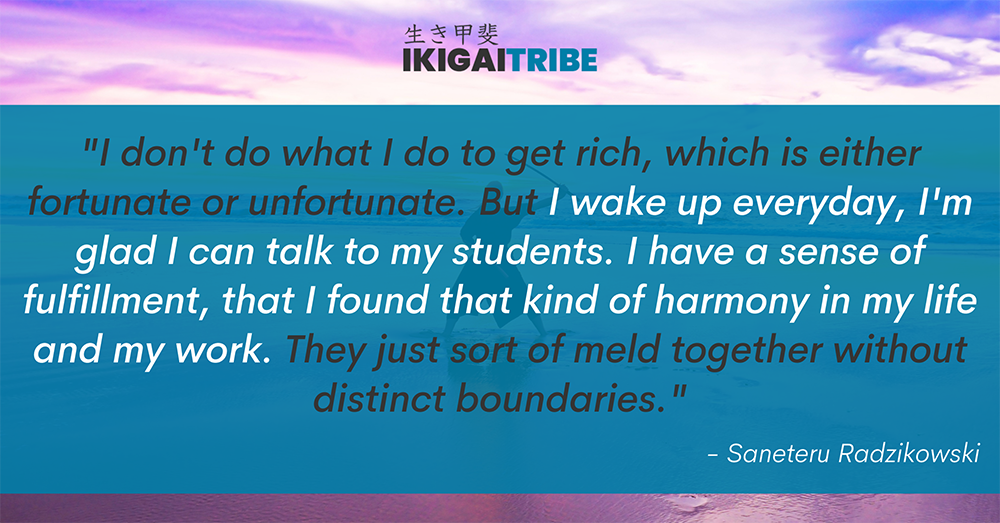 Nick agrees, comparing Steven’s experience with Shinkan-ryu Kenpo to his own experiences with ikigai; he says that the more he explores ikigai, the more he understands it: it’s not one thing, it isn’t permanent, and it isn’t an ending point -- but rather a place to begin, and a daily purpose. 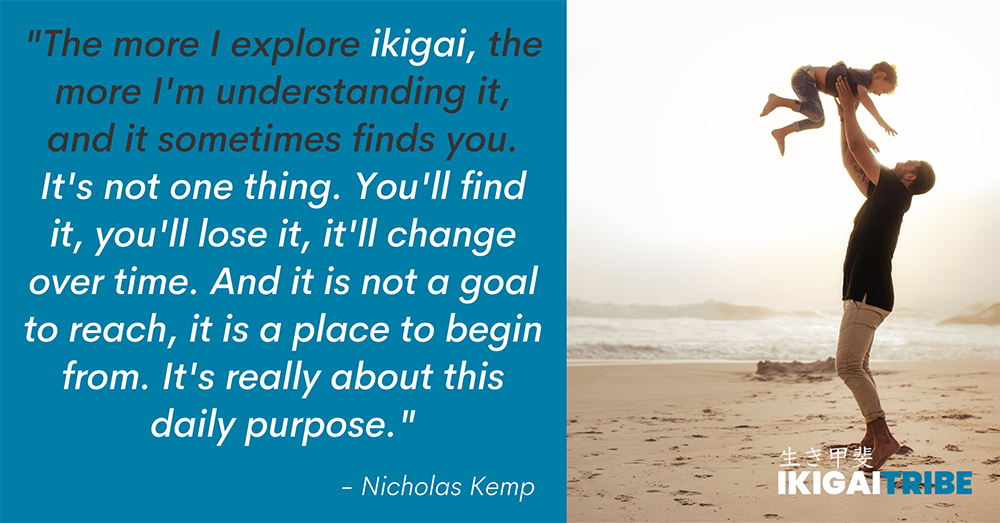 Nick says that people seem to be moving further away from ikigai because they are so fixated on materialistic things or the internet. Steven agrees, saying that people don’t have enough attention for the amount of information they have; they gorge themselves on information from social media applications that suck their lives away. He thinks it is important for people to put their phones down and disconnect for a while to get a step closer to concepts like ikigai and mushin.

We gorge ourselves on information from Facebook, YouTube, Twitter, and all these things that are coming up. It's fine to do once in a while but they just suck our lives away. Life is precious, we can't get it back. It ebbs and flows, it's a fluid thing. You'll never get a step closer to these concepts like ikigai and mushin without putting the phones down. - Sanateru Radzikowski 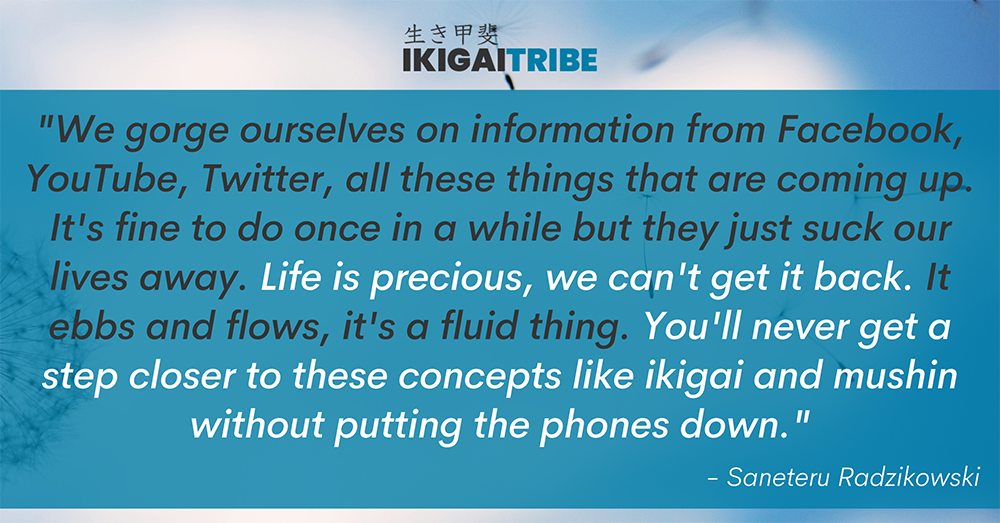 The dedication and effort that a swordsman puts in to master his craft can be considered ikigai: it brings fulfilment and creates a desire to excel not for the sake of recognition but because it allows you to contribute something to your community.