What is important to your ikigai?

In setting our goals or planning for the future, what are the things that we need to consider?

Is it important to associate our past and present lives with what we want to be in the future?

In this episode of the Ikigai Podcast , Nick discusses these ideas with Shintaro Kono and explores the role of the Japanese concept of hokousei in achieving ikigai.

Shintaro Kono is an expert in leisure behavior science and an assistant professor at the University of Alberta. Shintaro has been a regular guest on the ikigai podcast and has completed a three-part series on the subject of ikigai.

In 2019, Shintaro used a mixed-methods approach in a study he published on the temporal aspects of ikigai, or life worth living, among Japanese university students. He explains that mixed methods is the research approach in social sciences combining qualitative and quantitative methods. He interviewed students after conducting a photo-elicitation task in which  he asked students to choose pictures from their phones that they thought were related to their ikigai. The outcomes of the interviews allowed him to create his theory about ikigai in this population.

Shintaro says that houkousei means “directionality”, with hokou meaning “direction”. Like ikigai, it is a word commonly used in daily conversations by Japanese people. He shares that the students in his interviews use this term when they talk about where they are and where they want to be in the future, which shows that they perceive meaningful connections between their past, present, and future.

In his study, Shintaro found that when students formed explicit associations between the past, present, and future, they gained a strong feeling of ikigai.

According to him, there are two important associations related to houkousei and ikigai:

Shintaro mentioned in his research the relation of life legacy and life momentum with the cognitive and behavioral association. 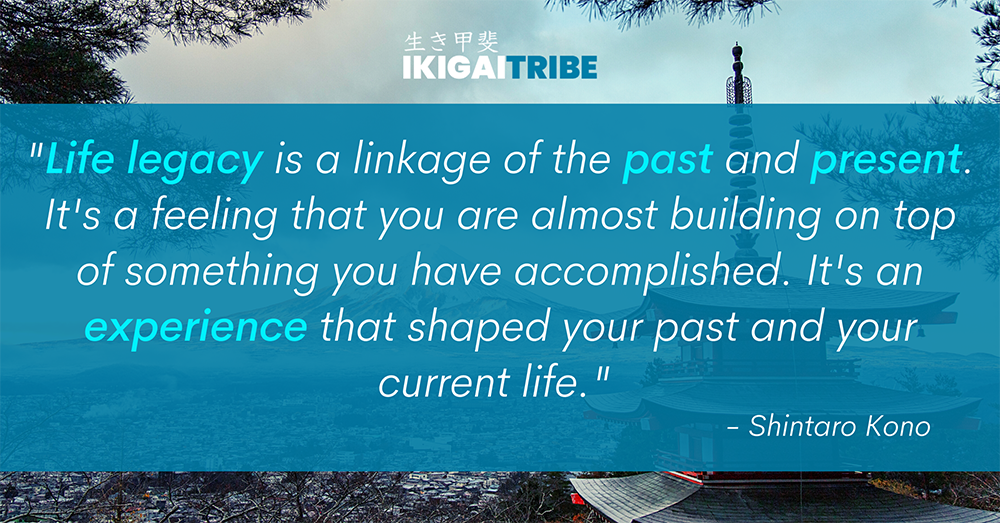 According to him, life legacy is a linkage between the past and the present. It’s a feeling that you are building on top of something you have accomplished, acknowledging that certain experiences have a key role in shaping your past and current life. He says that life legacy can change over time; what’s really important is the magnitude of it, since the value of legacy may increase as people get older.

He then describes life momentum as the opposite of life legacy; it’s the connection of people’s current state -- who they are, what they are doing, and what they value -- to their future goals. When you have this meaningful goal and things that you want to do, you have the feeling that you are almost floating and fired up; that’s the feeling of life momentum. 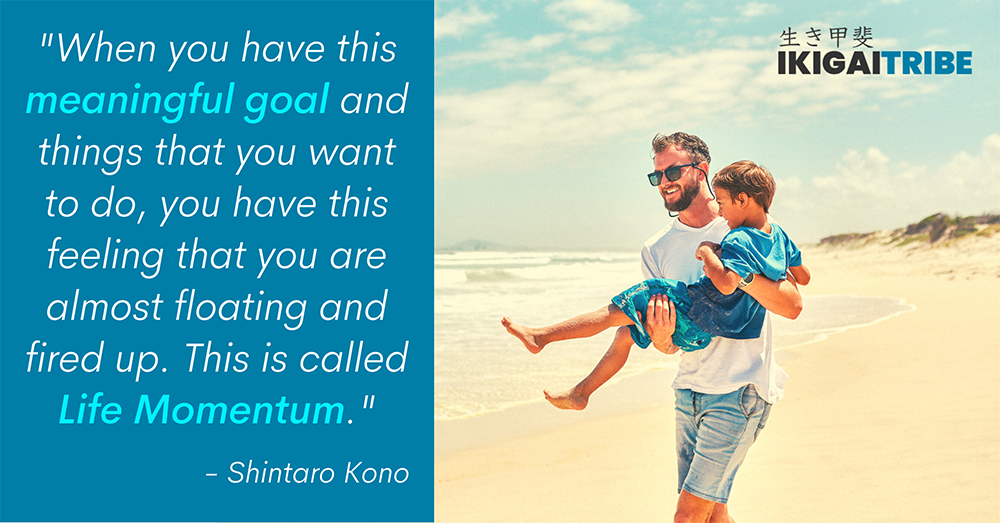 Desire for a bright future

Nick mentions that this concept of present-future linkage reminds him of one of Meiko Kamiya’s seven needs, the desire for a bright future, because when people think about their goals, they do have this desire for a better future.

Shintaro thinks of it as a good connection to what he’s trying to propose, but he also pointed out the difference between his work and Kamiya’s. He says that Kamiya’s work focused on people who experienced traumatic events, that they can have this sense of ikigai as long as they have this idea that their life can turn positive; however, his study focuses on students, who have not necessarily experienced those stressful events and therefore probably experience a different connection between their current and future lives.

Shintaro says that in terms of taking control of their lives and life momentum, it’s important for people to understand that where they are right now and what their future holds doesn’t necessarily need to be linear: their life direction might change along the way, they may experience ups and downs, and that’s okay; it’s not vital to schedule and plan everything. He believes that ikigai and houkousei are about the journey and process of getting there as much as actually reaching the destination.

Having this idea that you're moving forward is far more meaningful than achieving your goals. - Nicholas Kemp 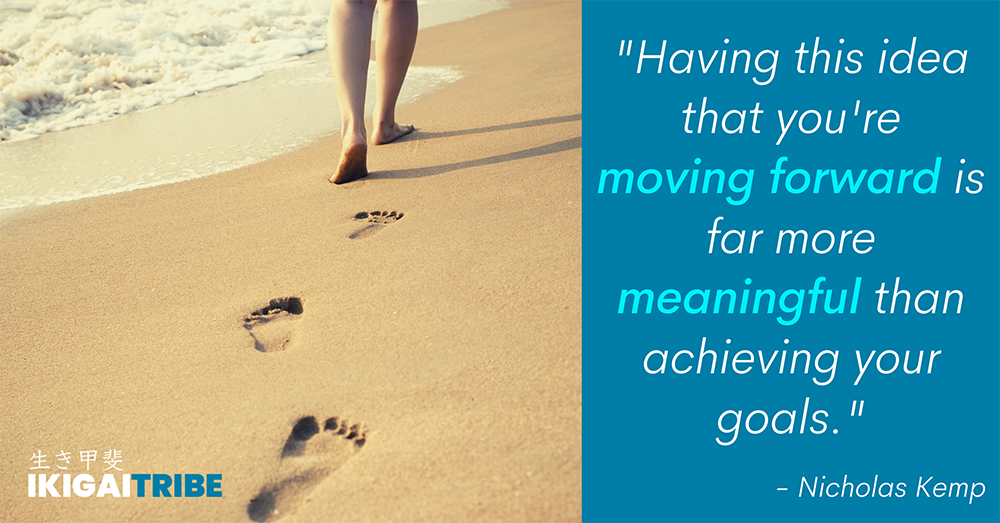 Nick then shares something he learned from Japanese philosophy: the process, and having this idea that you’re moving forward, is far more meaningful than achieving your goals. Once people achieve their goals, there’s often just a short-lived sense of success or happiness before they start pursuing another set of goals. What’s really important is extracting meaning from the process of goal pursuit.

When it comes to life directionality, Shintaro thinks that people should be in a mental space that facilitates creativity and brainstorming; they need to be able to review what they learned, what skills they acquired, and their personal growth, and relate these to specific experiences that they had, since this can help them identify important connections. He says that some experiences may be vague, which allows people to explore and have new perspectives. 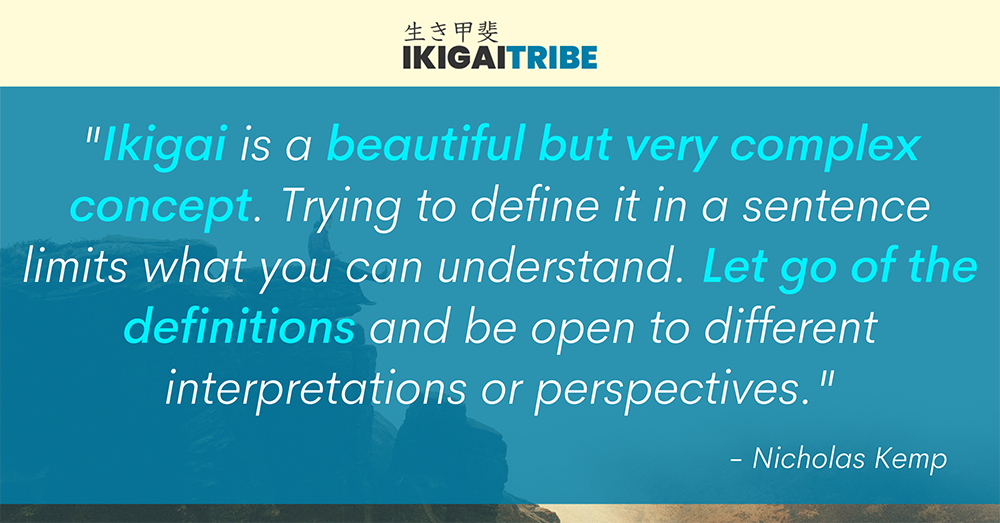 Nick says that it reminds him that people need to be more self-reflective; they need to take time and think about all the events of their lives, how they perceive those events, and how they think those events are related to who they are and who they want to be. He relates this to ikigai, a beautiful but very complex concept: trying to define it in a sentence limits what you can understand, and instead people should let go of the definitions and be open to different interpretations or perspectives.

The two talk about another Japanese term, yutori, which means “mental space”.

Nick thinks that yutori is also needed in life momentum or life legacy, and Shintaro thinks that it’s something that has to be looked into more. Shintaro says that there should be a mental space, something like reflection, a meditation session, maybe even a quiet walk outside -- whatever the yutori for each person is -- during which people can experience a moment when they are open to ideas, when they have freed their minds and have time to think and associate their past experiences with their current life and ponder the goals that they want to achieve.

Shintaro mentions how his research has found that a key condition for houkousei is defining the past -- looking for transformative, valued, comforting experiences that left vivid memories and influenced who they are today even if they no longer engage in those same sorts of experiences.

Nick then shares one of his transformative experiences. He recalls walking out of a job in a very stressful environment; it was a horrible experience for him, but, looking back, he realised it was a turning point in his life, after which things changed for the better. 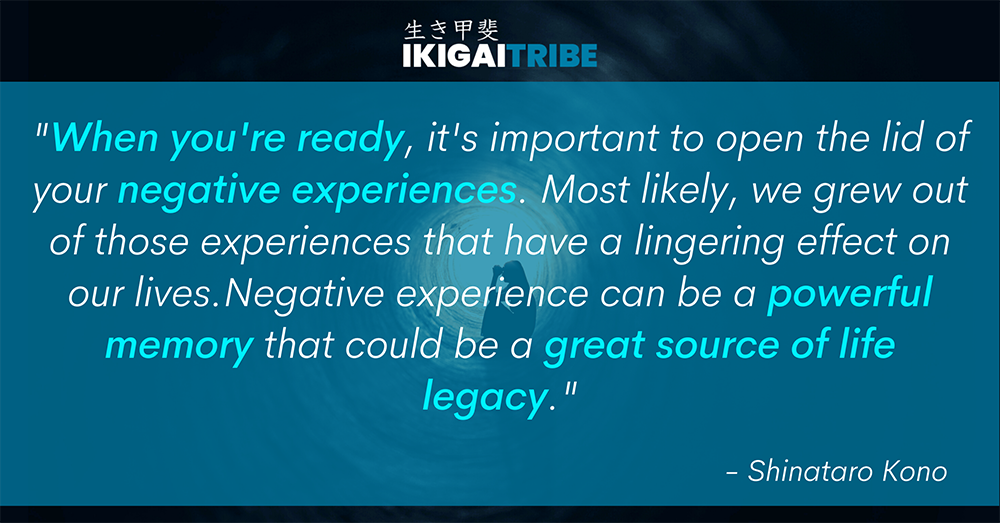 Shintaro thinks of Nick’s experience as a great example in the context of ikigai because it emphasises how ikigai cannot be fully understood and experienced if people only acknowledge and contemplate positive experiences. He says there is a tendency to focus on more pleasant things, but actually negative experiences can prompt growth and have other lingering effects on one’s life -- which can be a great source of life legacy.

Shintaro’s research found that a second important condition for houkousei is clear goals, which he defined as ‘present-future links’. Shintaro explains that clear goals are about what people want to accomplish in the future; the clearer the goals are, the more the people are drawn to them because it is easier to picture what they want to achieve. Everything else just flows from this and it’s easier for people to make cognitive and behavioral associations, which gives them life momentum.

Do not set goals that are shallow and superficial. It's important to have goals that are consistent with the authentic values that you really care about. - Shintaro Kono 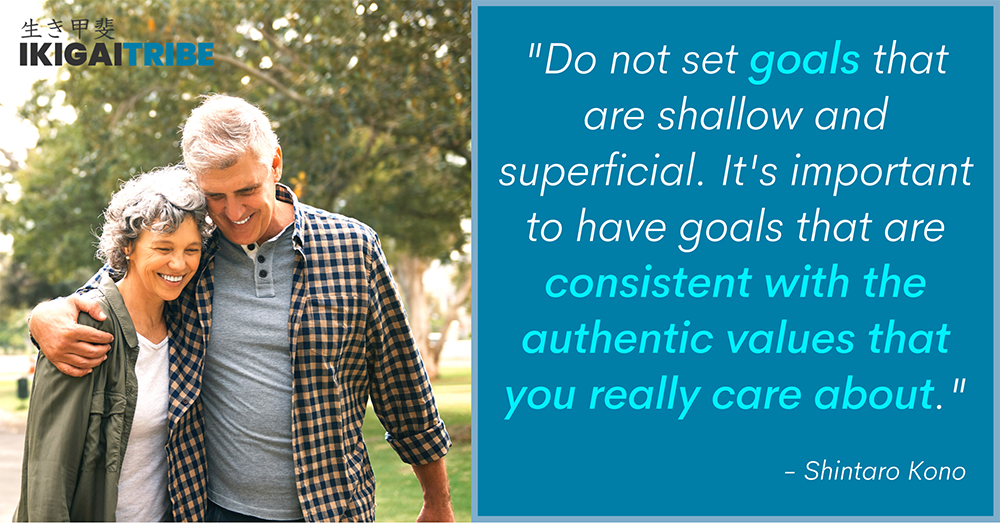 The interviews that Shintaro conducted with his students showed that students prefer to have a smaller number of clear goals than a large number of more nebulous ones. Short-term goals are clearer, specific, and tangible. For Shintaro, what’s important is for people to have goals that are consistent with the authentic values that they really care about, and not to set goals that are shallow and superficial.

Shintaro explains that there are two perceptions of houkousei: life momentum and life legacy. He introduces the idea of ‘houkousei actions’, which allow people to connect the past, present, and future, and to identify directionality and movement (i.e., life momentum and life legacy). These actions are needed to bring about houkousei, and so people need to purposefully engage with the cognitive and behavioural associations needed to make connections and help them recognise which experiences they really value, and which goals they want to pursue.

Three-part series on the topic of ikigai

IIn episode four of The Ikigai Podcast, Nick and Shintaro talked about how valued experiences in leisure activities can be the most meaningful way for people to experience ikigai, and in episode 17, they discussed the importance of interpersonal experiences and ibasho. This is the third and final podcast in their exploration of ikigai.

Having directionality helps us achieve a meaningful life. This means having strong connections with our past, present, and future goals. In setting those goals, it is important to align our values with them. It's crucial to evaluate ourselves first, and to understand what really matters. We will inevitably learn more about ourselves in the process of achieving those goals, which will clarify which paths we should follow in the future.