What does acceptance have to do with happiness? Nowadays, people tend to seek ways to be happy. They try to find satisfaction and more meaning in their lives. Is there really a way to find genuine happiness?

Join Nick and Scott Haas on this episode of the ikigai podcast as they discuss how acceptance can lead to happiness. 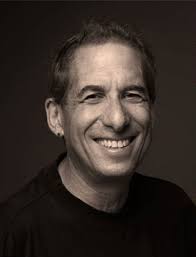 Scott Haas is a writer, clinical psychologist and the author of four books, including Why Be Happy?: The Japanese Way of Acceptance.

The winner of a James Beard award for his on-air broadcasts on public radio, Scott holds a PhD from the University of Detroit. He did his doctoral internship at Massachusetts Mental Health Center, a Harvard Medical School teaching hospital.

In normal (non-pandemic) years, Scott works in Japan three to four times annually. He is currently based in Cambridge, MA.

Why Scott chose to be a clinical psychologist

Right now, Scott’s clinical practice is in Boston’s Black community. Because of his father’s background, Scott became intrigued with individuals for whom personal stress had some evident links to historical circumstances, which for him is very specific in the Black community.

Scott shares that his love for writing came way before his interest in psychology. He was about six when he told his mom that he wanted to become a writer. He was inspired by a book his mom got him -- a picture book about the US Civil War, where battle scenes, guns, and cannons were shown. Scott thought that it was cool and wanted to write books like that.

When he was seven, Scott also made comic books with his friend. His friend was responsible for the illustration, while Scott did the writing. Scott found that writing helped him deal with his awkwardness and discomfort; it was something he felt naturally good at.

His fascination for food

Scott has written several books about food, and has done many broadcasts on food. For Scott, food is wonderful because it is nonverbal; it helps him distract himself from bad thoughts, and helps him feel calm.

He also found that food helped him get to know Japan better, because it provided a great way to meet people while also studying and learning about the food.

Scott’s fascination with Japan started when he was 13. He saw Rashomon, a film directed by a Japanese director, and that caught his attention. That was when he started to look for books that had Japanese names and started reading books from Japanese authors.

His doctoral thesis was about the psychological effects of the nuclear test. He studied a lot about Hiroshima and Nagasaki.

Scott first visited Japan in 2002, when invited, along with two other writers, by a famous New York chef who was going to be visiting the country. Scott reports being utterly smitten by Japan, though also shocked: everything looked similar to Western cities in terms of infrastructure, but completely different in terms of culture.

He learned about Japan in general, and about things like honorifics specifically.  Two concepts particularly caught his attention: honne and tatemae. Tatemae, he explains, is who you appear to be in public -- the behavior and opinions you display in public. Honne, on the other hand, refers to a person’s true feelings and desires.

Why Be Happy?: The Japanese Way of Acceptance

According to Scott, what inspired him to write about the subject of acceptance is that it added an enormous amount to how he deals with conflict and stress. It distanced him from stressful situations.

People can accept stressful situations, but don’t always have to respond or react to them. Not taking things personally, for Scott, applies on a very practical level to many situations.

In his book, Scott introduces the Japanese principle of acceptance, and how the Japanese seek resolution through understanding and harmony. It’s a reorientation of how you see things and how you see yourself in the world.

The original title of Scott’s book was Ukeireru. But his editor sent him an email saying that the title was kind of weird, and told him to come up with something edgy.

One day, while Scott was driving to work, he suddenly thought  “Why be happy, if you’re not going to think about other people in terms of happiness”. For Scott, personal happiness is extremely important. If you’re not personally happy, you’re not going to be able to be of help to others. Happiness depends on the community that you live in. If you’re not doing anything to be of use to others in your community, then the happiness is privatized, and you did something only for yourself. This philosophy, and the wording of his thoughts about it, inspired the title of his book. 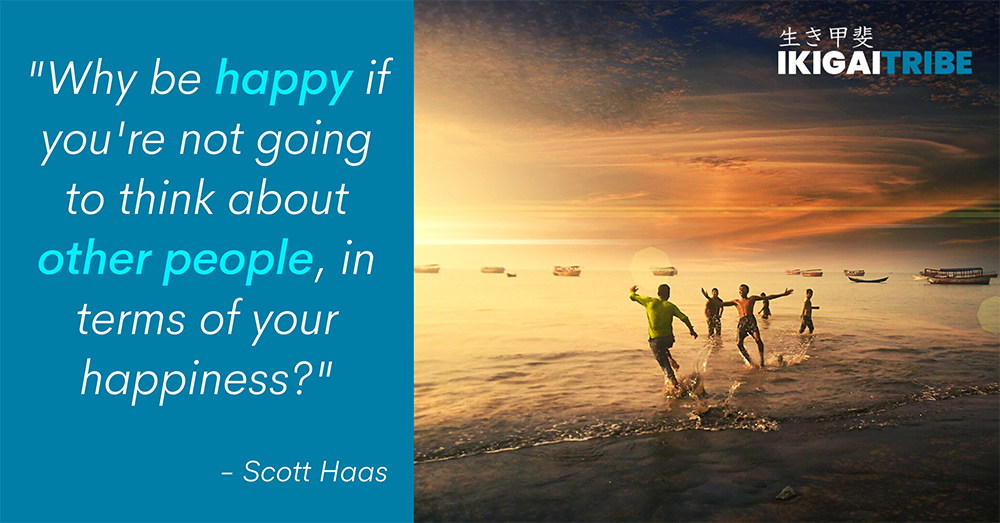 One of the Japanese expressions mentioned in Scott’s book is shoganai. This translates to “there’s no way,” or, “can’t be helped”. Scott considers it an expression of resignation rather than acceptance. 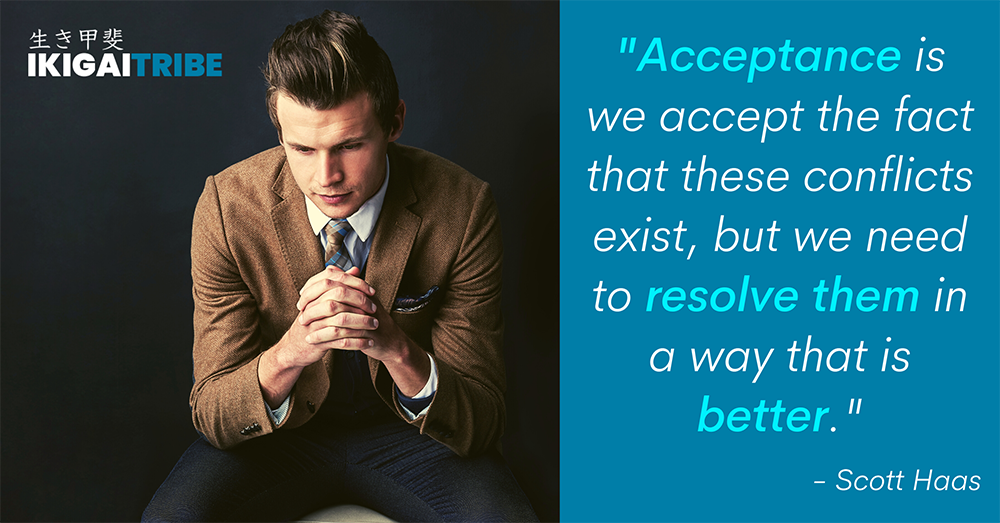 Scott first came across the expression in John Hershey’s book about Hiroshima. The book tells about individuals who developed radiation sickness and were doomed by the doctor, who said ‘shoganai’,  telling them there was nothing that they could do. This, says Scott, is clearly resignation, since it indicates that there is nothing that can be done. Acceptance, on the other hand, is when people accept the fact that these conflicts exist, but look to improve the situation by resolving it in a more positive way.

Ukeireru is the theme of Scott’s book. It is a Japanese verb which means ‘acceptance’.

To come up with a meaningful way to describe the Japanese approach to acceptance, Scott asked his Japanese friends about it. One explanation that stood out for him was that acceptance is more like the way a mother accepts a child. When your child is acting out, the first thing you can do about it is to accept your child’s behavior, after which you can think of ways to resolve your child’s issue.

For Scott, that concept of acceptance has a very pragmatic meaning in his daily life. Whenever he’s working with challenging individuals, he thinks of how to talk to that person -- how would he speak to them if they were his own family members, his own child? 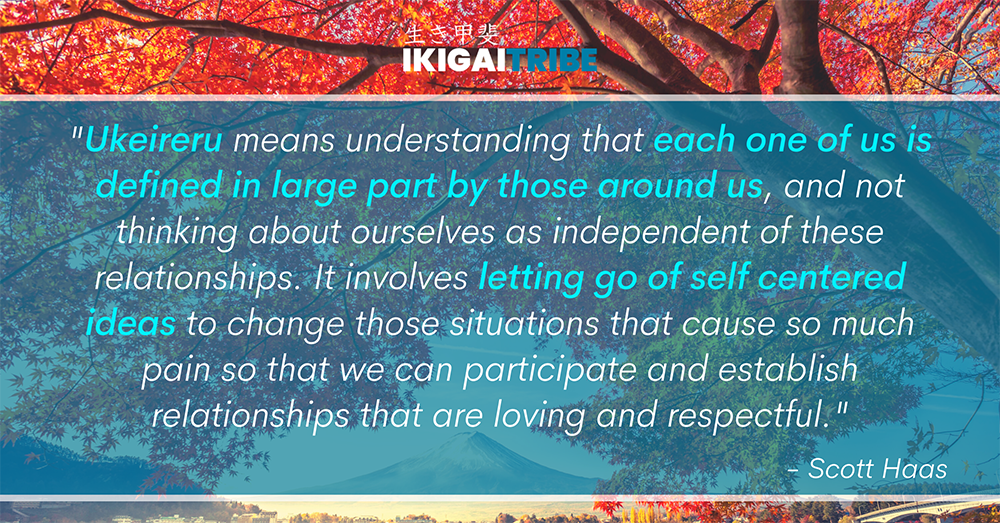 Scott gives his own definition of ukeireru in his book. For him, ukeireru means understanding that each one of us is defined in large part by those around us. It means thinking about ourselves as independent of these relationships. It involves letting go of self-centered ideas to change those situations that cause so much pain so that we can participate and establish relationships that are loving and respectful. It is inherently associated with mutual love and respect.

Nick and Scott discuss the connection between ukeireru and Zen Buddhism, which Scott addresses in his book. Scott has read many Zen koans over the years and repeatedly ponders some of them; he shares his favourite here:

The Buddha arrived in a village, and all the villagers felt happy except for one. That one person came over to Buddha and accused him of being fake. He ranted for a couple of minutes, saying negative things about the Buddha. And the Buddha just looked at him. When the guy is done, the Buddha asked him a question: “If a person gives someone else a gift, and the person refuses the gift, who does the gift belong to?” The discontented villager replied that it obviously belongs to the original owner who tried but failed to give the gift away. Buddha related that to the villager, whose “gift” is his anger, which the Buddha did not accept. The villager is left with his own anger, since nobody else wants it.

Scott shares that he tells this story to the community that he works in all the time because he finds it really helpful. Whenever he encounters angry people, he always reminds himself that their anger belongs to them and has nothing to do with him. This allows him to distance himself from the negativity.

Scott shares that the first Japanese word he learned was sumimasen, which has three meanings depending on context: “I'm sorry”, “excuse me”, or “thank you”.

Scott thinks that it also means you’re not just sorry, but, specifically, you’re sorry for putting your needs before others and/or for thinking only about yourself. Sumimasen is an apology offered in acknowledgement that you have inconvenienced, or are about to inconvenience, someone: you apologize to avoid tension or potential conflict. This changes the situation, giving the person who is upset with you an opportunity to deal with a less tense dynamic, and to find resolution more quickly.

Scott discusses the word wakarimashita, which he finds liberating to use. It is a way of indicating that you understand what others are saying, even if you do not agree with them; thus, it offers a way of ’showing respect for other people’s views.

In Japan, this is associated with understanding as almost a way of developing almost a silent consensus; by reading emotions and understanding things, someone can carefully comprehend the situation without things ever being put into words.

Scott feels that acceptance is integral to decision-making. Further, accepting that the group’s needs come first opens up innovative ways to make decisions with others. 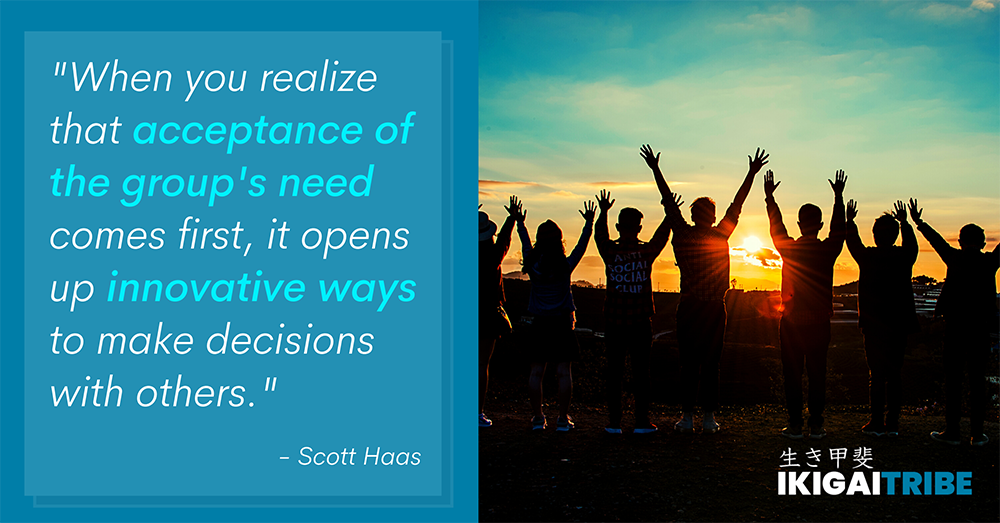 When making decisions, it is important to balance self awareness with listening to other people’s ideas.

There are three strategies that Scott experienced in Japan which helped him make good decisions:

It is great to practice and take your time to be good in decision making.

Silence plays an important role in how Japanese communicate; they have a comforting silence experienced between friends, and Scott feels this is a way of showing trust with one another. You don’t need to know the other person any better; you’ll just feel it. Silence is a way of showing love.

Nick says that silence is a way to be intimate with someone without having to speak or physically touch them. You just enjoy each other’s company.

What’s lost must be accepted

Nick quoted the final two paragraphs of Scott’s book, where Scott writes about how life isn’t about happiness so much as about learning to live with disappointment, making others safe and developing insight that helps you understand that happiness flees when there is loss. Scott says that what’s lost must be accepted. 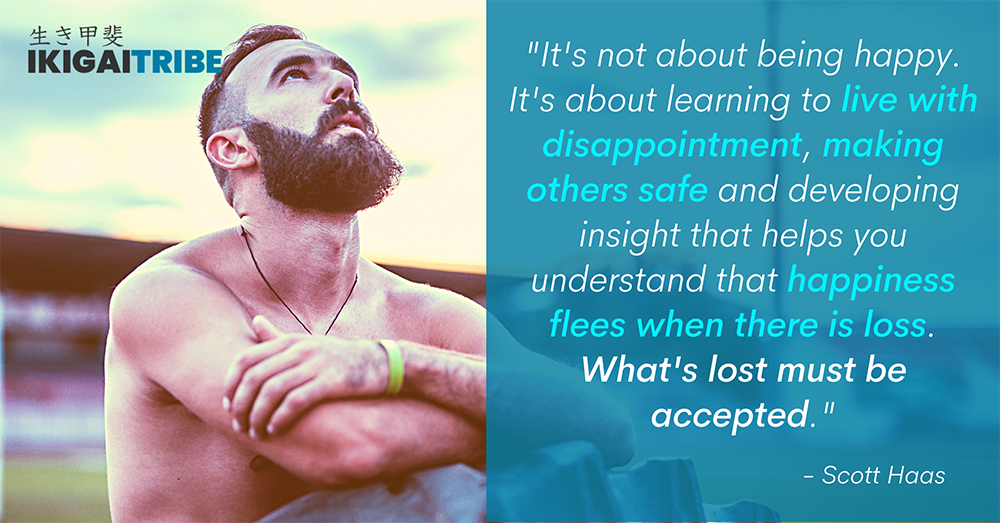 If people can do this, they will be able to move on and appreciate the wonderful things that life has to offer. Scott advocates making an effort to find happiness each day, try to live in the world, try to live with loss. Be present, he says, and everything else will follow.

Scott’s overall message is that happiness is contagious. He urges listeners to find personal happiness, which will allow them to find ways to be of help to their community. Understanding and acceptance are key to wellbeing, and Scott feels that these grow out of understanding each situation and person encountered, and accepting the things that are out of one’s control.