In this episode of the Ikigai Podcast, Makoto Furuya joins Nick, to share how he was able to rediscover and reconnect with his Japanese roots.

Ikigai is not about money

"So I was attending a conference virtually. And the speaker set it out with the queation 'What's your ikigai?' And then it was about a career path, if I remember correctly, and I saw the Venn diagram, and it really bothered me. And I think particularly the part that bothered me about was the money." - Makoto Furuya 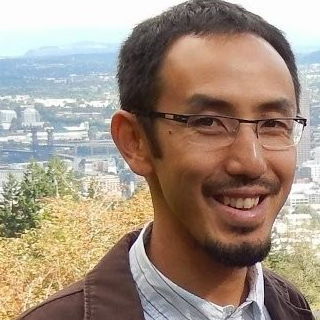 Makoto Furuya is a software engineer and visual artist. He was originally from Japan and immigrated to the U.S. over two decades ago; he and his wife are currently based in the Pacific Northwest.

Growing up in Japan

Makoto was born in Kokubunji-shi in Tokyo and spent most of his youth in Matsudo-shi in Chiba prefecture. Growing up wasn’t a pleasant experience for him; he shares that he was pretty tall for a Japanese person, and wasn’t good at physical activities, hence, he was made fun of a lot. He felt like he never fit in with the Japanese standards: he was kind of outspoken which he got in trouble for quite often. He had a hard time expressing himself in Japan, which was different when he started learning the English language. As he describes it, English became his ‘heart language.’ Allowing him to fully express himself.

Moving to another country

At the age of 15, Makoto applied for a homestay program at his English conversation school; he stayed for a month in Oregon during his summer break, where he was able to make meaningful connections, which later on, the family he stayed with, ended up being his in-laws. Makoto states that he had a great time during the homestay program; he was able to experience what a family is really like and was able to learn and explore a lot.

Makoto finished his high school education in Japan, then decided to move to the States to attend university. Initially, he was going to study veterinary science, with the influence of his mother and stepfather who were both veterinarians. However, after he started college, he discovered that he could switch majors, which is something that can’t be done in Japan; and he thinks that changing majors helped him to explore his interests in different areas.

Ikigai sources in the U.S. 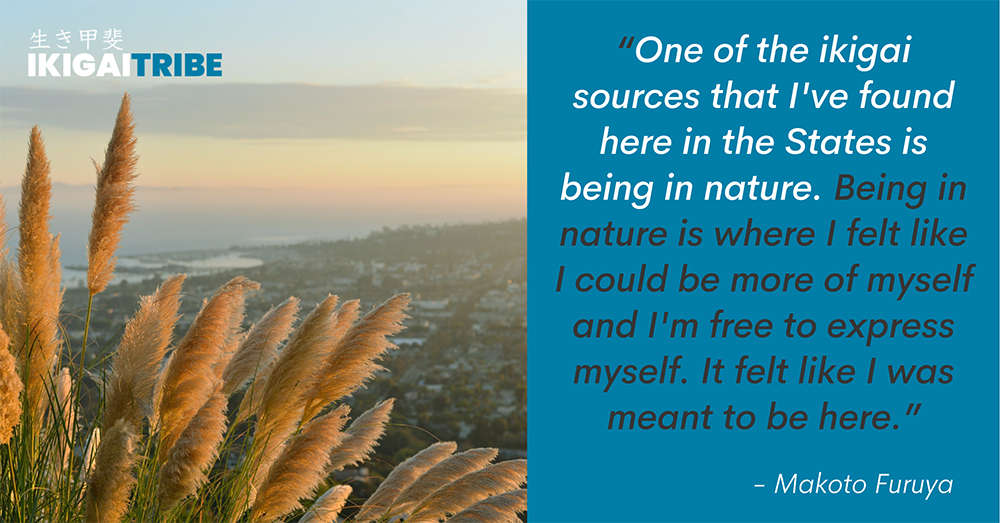 Makoto is very fond of the U.S. where he found a lot of ikigai in. Living in a small town, he enjoys being outside and being in touch with nature, going on a bike ride, which for him was hard to do in his hometown, Matsudo-shi. He shares that living in the U.S. makes him feel more like himself – something he considers his ibasho (the place where you can be yourself).

Makoto shares that when he was registering his marriage in Japan, the first thing he needed to do was to get his koseki (family register); to his surprise, upon getting his koseki, there was an unfamiliar name listed as his biological father. It was a secret kept from him all his life. Initially, he tried to put it aside and not think about it too much, but later on, decided to look for his biological father, and was fortunate enough to find him.

I didn't really like growing up in Japan, but I felt like there are some things that I learned in that culture that now shows up in my work ethic or my approach to life. And as I get older, I'm starting to appreciate them. - Makoto Furuya

Makoto reconnecting with his father led him to rediscover Japan and find ikigai in his Japanese roots. He shares that growing up, he didn’t have a strong connection with his mom and stepfather – they did not get along that well, hence, he did not feel like Japan was a home for him. However, upon meeting his biological father, with warm and happy energy, Makoto shares that he instantly felt that he found another family, together with his half brother and sister, and it changed his perspective of Japan; it made him realize that his values are shaped by the culture he grew up in, and still a part of him; he has developed warm feelings towards the culture that he grew up in.

Makoto encountered the Western interpretation of ikigai through a tech conference; one of his colleagues presented the concept of ikigai using the Ikigai Venn Diagram. Makoto shares that it bothered him upon seeing the diagram, especially the part where they associate it with money: that ikigai is something that people get paid for. He kept thinking about it for days, that the diagram just felt all wrong for him, though he couldn’t find a comfortable way to express what ikigai meant. Then he stumbled upon Nick’s blog post about ikigai, which provided him with a way to articulate the concept in English.

For Makoto, ikigai is on a smaller scale where he experiences ikigai-kan frequently – something that motivates him and keeps him going, especially when life is hard. For him, it is going for a walk, observing some interesting things during his walk, hiking, going to the coast, and just watching the waves – it is all about the simple things that he enjoys doing which motivate him in his daily life. Makoto feels immersed in the moment when experiencing the feeling of ikigai – he enjoys the moment and does not think about anything else; it is not just being in the moment, but also finding a purpose or life meaning.

Feeling your life is moving forward is crucial. This sense of purpose will help you through dark times. I always try to remind myself to remind other people that ikigai is something you feel, it's not something you chase. - Nicholas Kemp 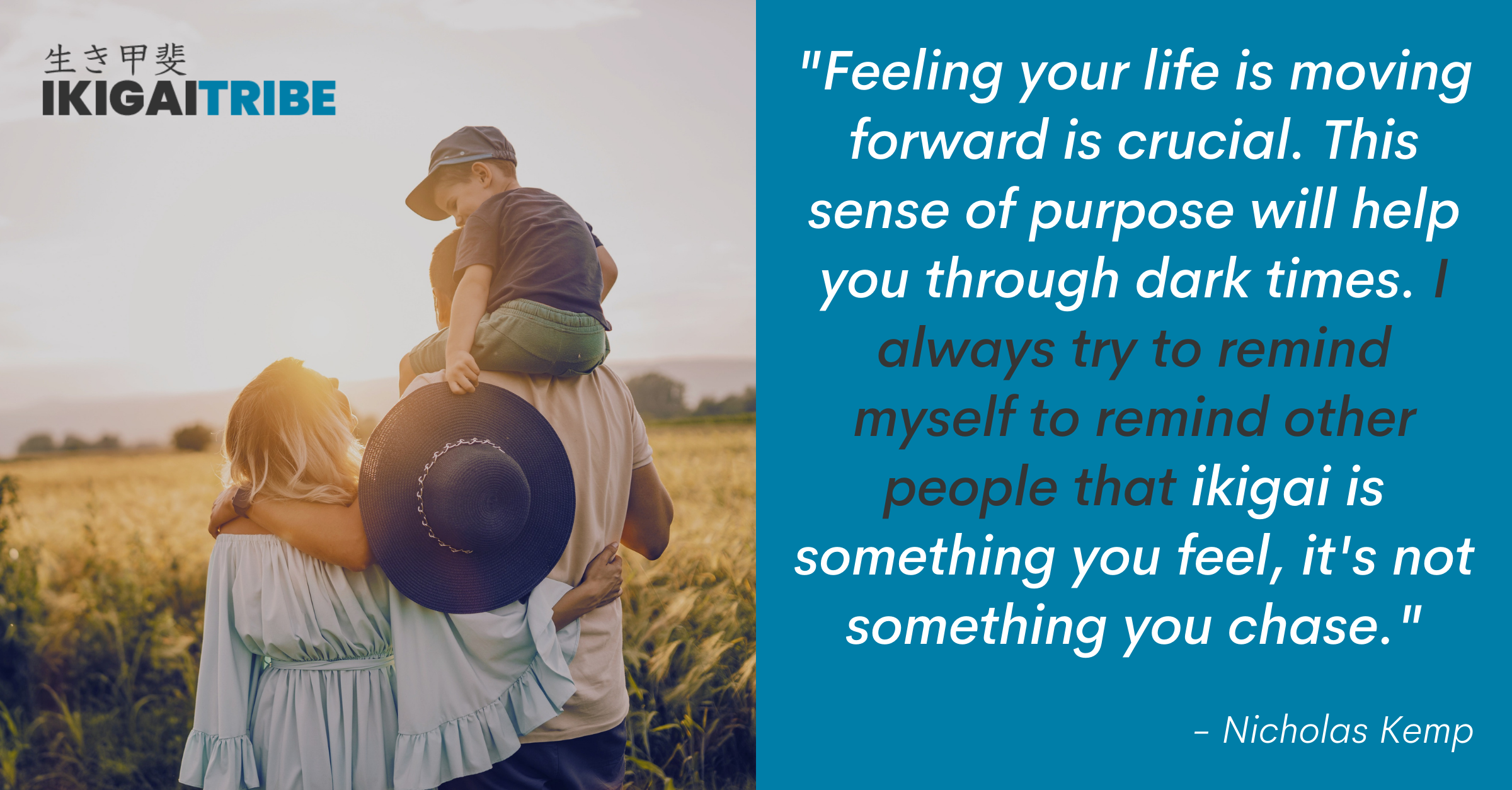 Nick believes that ikigai is something that people feel; the sense of purpose will help people through dark times.

Ikigai’s role in the context of Japanese culture

Makoto thinks that the concept of ikigai emerged to provide individual freedom in Japan’s group-oriented culture. In Japan, it is difficult for an individual to express his/her feelings, hence, Makoto believes that with the help of ikigai, people gain individual freedom because it is something people can experience privately.

Having a sense of freedom in a foreign country

Makoto shares that while moving to Japan freed him from the pressure of living in Japan, it took him a while to feel a sense of freedom. He is still on his journey of self-discovery, especially now that he has reconnected with his Japanese roots.

Going back to Japan

It was the summer of 2018 when Makoto last visited Japan, he went to visit his father. He shares that he felt like a foreigner visiting Japan, trying to be mindful of his actions: be careful not to be too loud and obnoxious. This behaviour relates to the Japanese term honne (one’s true feelings) and tatemae (behaviour one displays in public); when talking to his father, Makoto becomes more at ease and able to express exactly what he feels. On the other hand, with other people, he is more careful about what to say and tries not to be too direct. 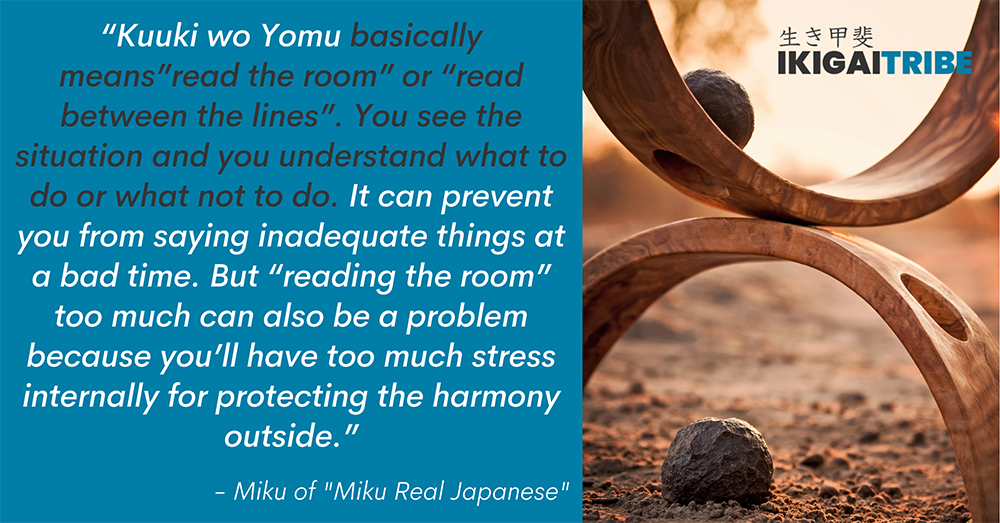 Nick shares something he learned from Ken Mogi: that when people voice an opinion or simply say what they want to say, there’s a possibility that they are alienating someone else. It might feel great to voice their opinion but they don’t know the impact that comment or disagreement could have. Therefore, finding a balance between voicing an opinion and considering others is a good practice.

Aside from his love for nature, Makoto also finds ikigai in craftsmanship and doing his job properly. For him, ikigai is all about his values, work, and hobbies.

One of the most important things in ikigai is to align it with our values, and in order to do that, we need to get in touch with the culture we grew up in. Getting in touch with our roots may also be a tool to discover something about ourselves. Although we might not notice it in our younger years, the values ingrained in us while growing up shape us – they help us understand who we really are, and the more we know who we are, the easier it is for us to have agency over our lives.