In this episode of the Ikigai Podcast, Shinichi Nagata joins Nick to discuss the paper he co-authored on the topic of ikigai; how leisure have an impact on our sources of ikigai.

Self is something that's in the core Shinichi Nagata is an assistant professor in the Faculty of Health and Sports Sciences at the University of Tsukuba, Japan. His research investigates community inclusion and health outcomes among people with disabilities. He is particularly interested in how and why leisure is helpful to overcome depression. His research also includes promoting community inclusion of people with disabilities.

Nick and Shinichi met through Dr. Shintaro Kono, a regular guest of the Ikigai Podcast. Shinichi has co-authored several papers with Shintaro on topics ranging from depression, leisure, and meaning-making. He shares that he and Shintaro met each other when he was a guest editor of a research journal where Shintaro submitted a paper. After that, Shintaro contacted him for an opportunity to work on a study about ikigai, and they started to collaborate; they both worked on the paper: “Understanding leisure’s impacts on sources of life Worth Living: a multi-domain approach.”

Shinichi shares that he has been working with people with disabilities for a long time, and meaningful activity is one of the things that interest him. He thinks that it’s important to look at how meaningful activities can help in reducing depression.

What is self in the context of ikigai?

Self is the core of a meaningful life, and it is related to all the activities that people have to make their lives worth living. - Shinichi Nagata 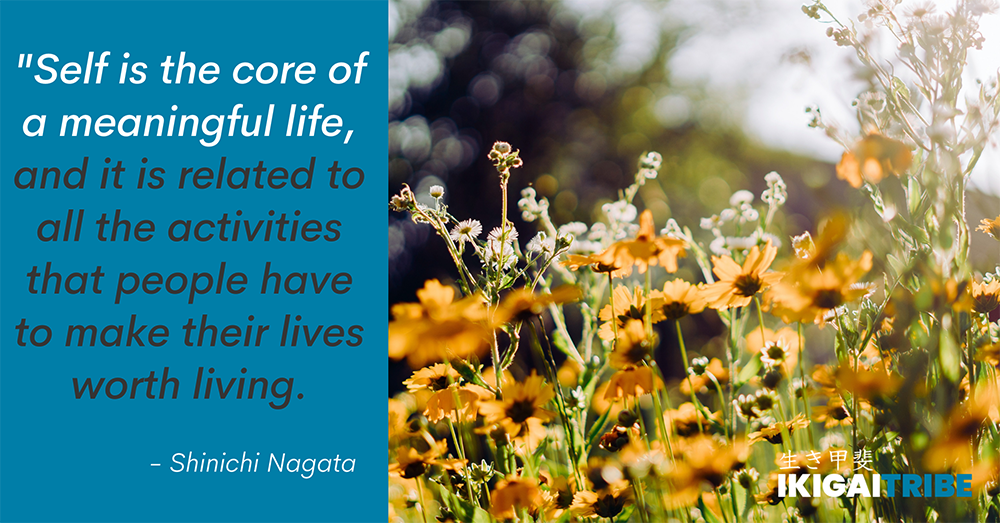 One of the themes explored in their study is self. Shinichi explains that in the context of their research project, self is a person’s worldview: how a person looks at the world, what kind of things they value, and the decision that they make in their daily lives. For Shinichi, self is the core of a meaningful life, and it is related to all the activities that people have to make their lives worth living.

Under self, Shinichi and Shintaro identified two sub-themes: values and self-determination.

Shinichi states that values can be seen in different activities that people do. An example he gave was a student named Yoku, whose hobby is breeding cicadas. Cicadas live underground for years before they come above the ground and start to fly. With that, Yoku developed the value of patience and knows the importance of preparation while breeding cicadas. This value also reflects on him as a student: he is a member of a student group that organizes events on their campus. Organizing an event also takes a long time, so Yoku’s value of patience can also be seen – he thinks that preparation is so important.

The other sub-theme, self-determination, Shinichi explains, is about the feeling that people want to do certain things in their own way, which is relevant to leisure activities – they choose to do what they want to do.

In the context of their study, Shinichi explains that they define tanoshimi as not just momentarily pleasure or enjoyment, but it also has multiple dimensions, particularly, something related to future enjoyment or pleasure. An example of this is how Nick learned the term tanoshimi during his stay in Japan: he and his colleagues are planning to do something on the weekend, and his colleagues said that it is tanoshimi – anticipating something that will happen in the future. Nick thinks that tanoshimi ties into the concept of ikigai: the idea of having things to look forward to – even though people are struggling with life, they still have things to look forward to that give them motivation.

In their research among Japanese students, Shinichi shares that they found three additional dimensions of tanoshimi in their pursuit of ikigai: savouring and absorption, shigeki, and anticipation and reward.

Shinichi explains that savouring and absorption mean being immersed in the moment, which is like mindfulness – being in the moment and maximizing the experience of enjoyment. For instance, students having a delicious meal: they are focused on eating and enjoying the pleasure of having good food.

Another dimension of tanoshimi is shigeki. Shinichi states that shigeki is a term that students use to describe novel experiences. Students think that their daily routines such as eating, going to school, or sleeping, are not qualified as ikigai. For them, it is about having new experiences, meeting new people, or engaging in new projects; they believe that life without shigeki (stimulation) has no tanoshimi (enjoyment) because shigeki involves new, transformative experiences.

The third dimension of tanoshimi is anticipation and reward, which are the students’ use of enjoyable activities as something to look forward to or as recognition of their effort and achievement. Students use pleasurable activities as sources of motivation in their lives.

The Western interpretation of ikigai

Asked about his thoughts on the Ikigai Venn Diagram, Shinichi says that he thinks that the Western interpretation of ikigai is focused only on work and that ikigai is not limited to the four circles of the Venn diagram, which states that it is something that people love, that the world needs, that people are good at, and that people get paid for. There are other aspects that can be considered as ikigai and one of those is leisure. However, he thinks that work can also be a source of ikigai because most people spend their time at work.

Can a role be a source of ikigai?

Shinichi believes that a person’s role can also be a source of ikigai because roles relate to relationships with other people. For example, having a role as a mentor or teacher makes a person’s life meaningful because they know that they are contributing to other people’s growth. 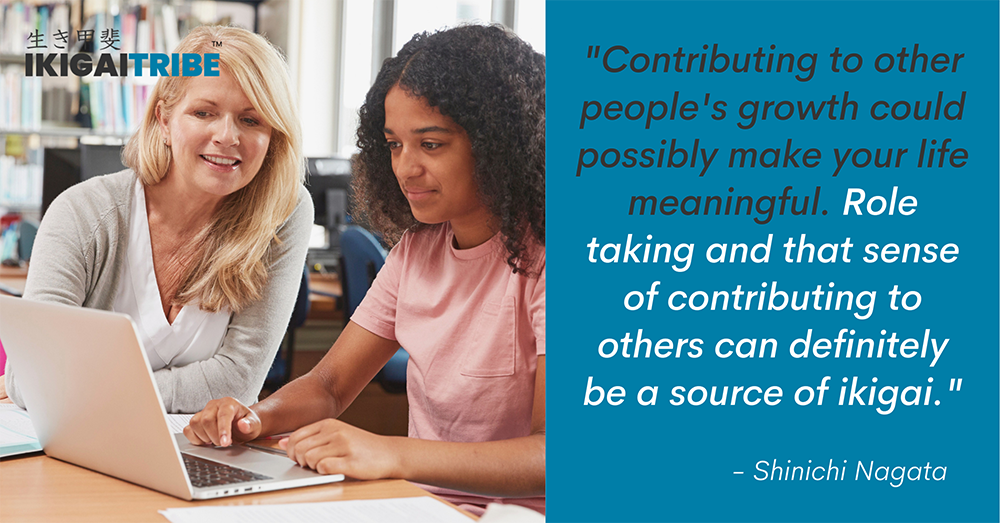 Another dimension of their study is growth and achievements. Shinichi explains that when students talk about their shigoto (work), they often link it with growth and achievements. By working hard, students can attain personal growth and achieve higher goals; and growth and learning are something valuable and can be considered as ikigai. For instance, a student named Kakeru chose a picture of his badges for an airline pilot program to represent his ikigai; it shows his efforts towards becoming a pilot.

The synergy between tanoshimi and shigoto

Shinichi shares that they have found an interrelationship between tanoshimi and shigoto. By experiencing shigoto and the challenges they have while working really hard, students can appreciate more leisure activities – experiencing a hard time makes them enjoy leisure activities more. The students believe that if there are no challenges, there will be no enjoyment; and Shinichi thinks that there is a healthy balance between challenges and enjoyment – people cannot have all enjoyment in life and no work. If people only live a life of leisure, at some point, they will get tired of it as well. Their experience of enjoyment diminishes over time and they start looking for something new.

If there is now challenge in your daily work, perhaps there is no enjoyment in your life. Because you don't have that sense of, "I can reward myself now. I worked hard at work, now I'll do my favorite hobby." - Nicholas Kemp 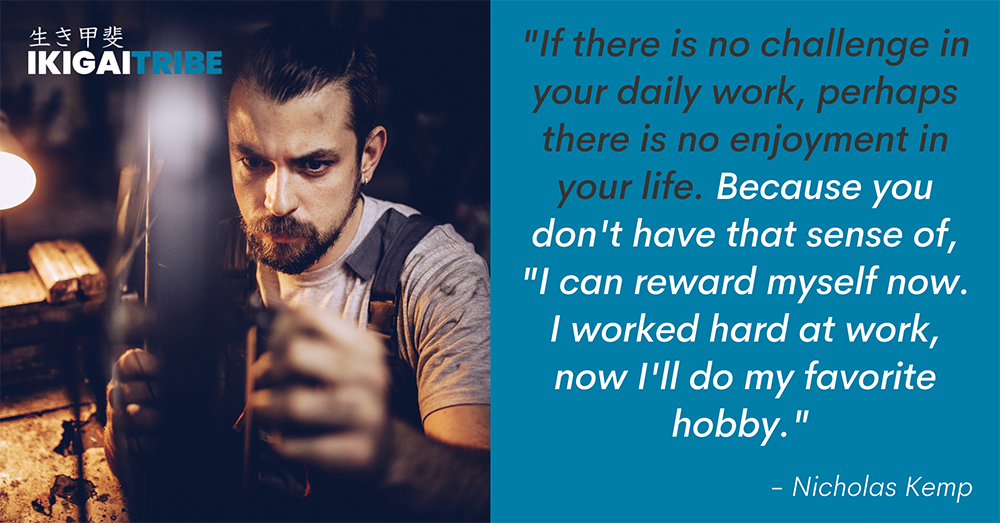 Nick believes that if there is no challenge in people’s daily work, there is no enjoyment in their lives, because they don’t have that sense that they can reward themselves for their hard work.

Shigoto are activities that people need to be very intensely involved in; it requires mental and physical energy, hence people need to have self-care to gain their energy back. In their study, Shinichi shares that they identified three key self-care categories: physical, mental, and social conditioning.

I think framing self-care as an ikigai source could be very helpful, because a lot of people feel guilty about getting help or looking after themselves. - Nicholas Kemp 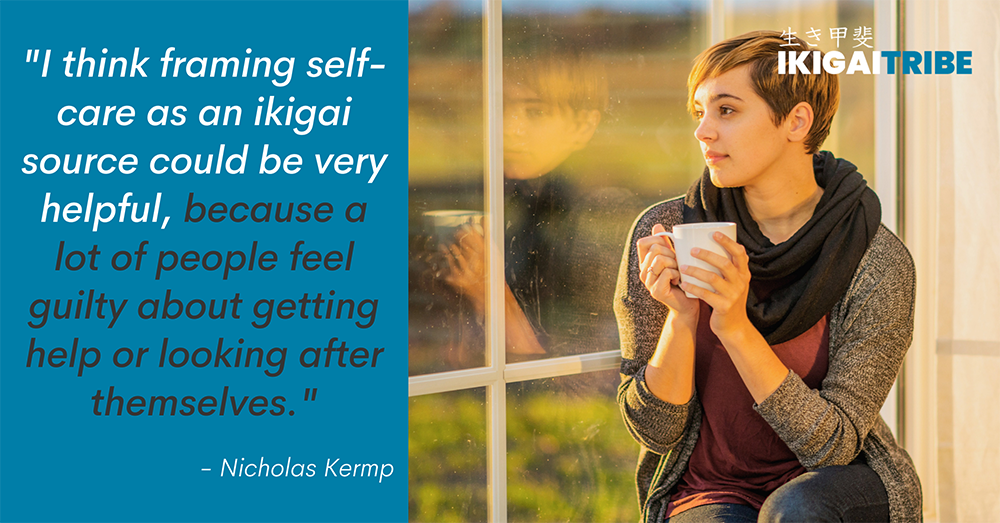 Nick thinks that framing self-care as an ikigai source could be very helpful, because a lot of people feel guilty about getting help or looking after themselves.

In their study, Shinichi shares that they found two distinct modes of interaction through which students connected with their close others: sharing and support.

Shinichi shares that he has plenty of ikigai sources, and the most prominent is his family. He has three kids and he and his wife have spent their time raising and giving all their love. He thinks despite some hardships, raising his children is a fun process and makes his life more meaningful. He believes that his family should come first because it is the foundation of all ikigai activities.

Contrary to the Western interpretation of ikigai that focuses more on work, this study of Shinichi and his colleagues shows that there are other sources of ikigai and that leisure has an influence on these sources. Leisure activities can be a form of motivation for people to do better at their jobs because they consider it a reward after going through all the stressful activities. Leisure can also be a way to develop meaningful relationships and experiences that can lead to the feeling of ikigai.