In this episode of the Ikigai Podcast, Nick and Trudy Boyle discuss how people can live a meaningful co-existence with illness.

Ikigai is the sum of small joys

"Even within cancer, I love the idea of the sum of small joys in everyday life. Because it moves right into where we spend most of our time. I could say that the work I do, the work I did at Wellspring, the work I do now is absolutely part of my ikigai. There's no question. But it has nothing to do with career or money for me. I love what I do.

And I also love caring for my grandchildren, and I love poetry -- things that lift my spirits, and give me strength, courage, and bring joy to my heart. I have so many of those things. And so that's for me is ikigai." - Trudy Boyle 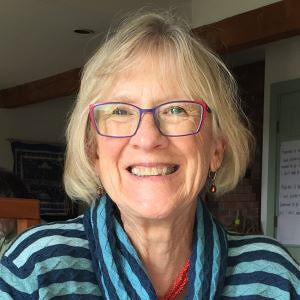 Trudy Boyle is the Director of ToDo Institute’s initiative on Living Fully with Illness. She serves a broad digital community of people living with illness through weekly webinars and blog posts, online and residential programs, and is a regular contributor to the Thirty Thousand Days Quarterly. She was also the former program director of Wellspring Calgary in Canada and continues to play an active role in the Wellspring community.

Before she even knew about her illness, Trudy was already facilitating a program for cancer patients, talking about ikigai and illness and sharing helpful information with them. Trudy recalls being asked to participate in a training where they were all invited to do an exercise: to visualise what they have inside that would give them strength to deal with illness. The expression that came to her was: “you are not alone.” She thought that at any time of crisis or difficulty, there are always people who are ready to help. Hours after that, she received a message from her doctor; it was then that she found out that she was diagnosed with cancer, which was a total shock for her because there is no history of this illness in her family.

Trudy shares that she was introduced to Dr. Itami’s work way back in 1991. A friend of hers gave her the book Playing Ball on Running Water by Dr. David Reynolds where she learned and instantly developed a liking for Morita therapy. She then reached out to Dr. Reynolds and took his program, which led her to discover Ikigai Ryoho (meaningful life therapy), designed by Dr. Jinroh Itami for metastatic cancer patients. Dr. Itami had the mantra, “Even though I am ill, I will not live like a sick person.” – He wanted the cancer patients to do things and find reasons to stay alive, not allow cancer to dominate their lives.

Trudy came across the term 'ikigai' during her 10-day intensive training with Dr. Reynolds. For her, ikigai is the sum of small joys in everyday life, a reason to get up in the morning, and things that lift people’s spirits and bring a smile to their faces. It has nothing to do with career and money; rather, it’s all about people discovering their small purposes in life. Especially when it comes to illness, it is important to stay in the present moment and look at small purposes that are important.

Trudy believes that people who are suffering from serious illness should play an active role in their own sickness: doing some research and learning about their cancer, their treatments, and asking questions from their doctor. It is learning to live well with illness – being involved throughout the entire process and not limiting themselves in what they can do because of their illness. People should move away from putting their life on hold by playing an active role not only in their treatment but also in their own lives; aside from medical treatments, there are plenty of other non-medical areas which people can pay attention to that can lift their spirits.

John Stephure was Trudy’s friend and colleague. After being diagnosed with very difficult cancer, he was given one year to live -- yet was able to live for 11 years. She met John when he joined her workshop on living well with wellness last 2000. From then on, he was determined to set up a centre in Calgary, Canada for people impacted by cancer -- people who had cancer, their caregivers, and friends.

By 2007, the centre actually came to life; years later they had a new building which they call the Carma house. Unfortunately, John went to the hospital the day before the opening of the house and never got to go inside. Trudy defines John as a purposeful man who wholeheartedly devoted himself to Wellspring. His ikigai was focused on four F’s: faith, family, friends, and fun. He did not want others to go through cancer the way he did, hence his mantra, 'no one needs to face cancer alone', which eventually became a vision statement of Wellspring, Calgary.

Questions to ask one’s self

Trudy shares some of the questions she asks during her workshop: what matters most? What lifts your spirits? How often do you do these things? When was the last time you did these things? These questions help people to reevaluate their lives; knowing what matters in their lives helps people find out their small purposes, which gives them motivation despite what they’re going through.

Finding someone worse off than you and helping them

Ikigai goes beyond just what lifts my spirits. It's also about how we contribute, the impact that we have on other people in our community. How we can leave something to be helpful for others. - Trudy Boyle 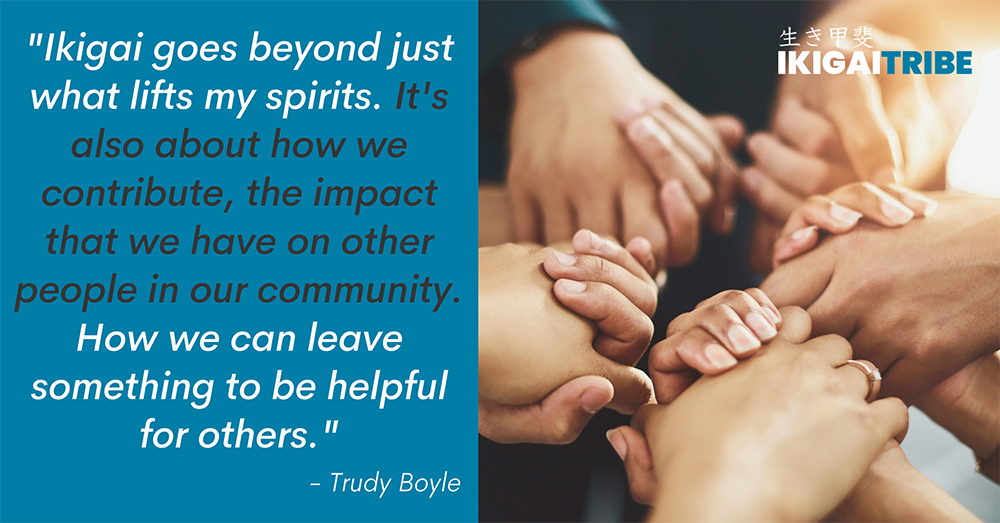 Trudy thinks that ikigai goes beyond what lifts a person’s spirit. It is also about contributing and having an impact on other people’s lives – having a real ikigai impact. Making an effort and doing the things that you can do for people around you. It can be a simple gesture but it will totally leave an impression on others. Helping others can also give the person with illness some satisfaction.

To take an active role in doing something for others, we're executing some control over our own behaviour. We feel better and the science shows that. When we help others, it helps us. - Trudy Boyle 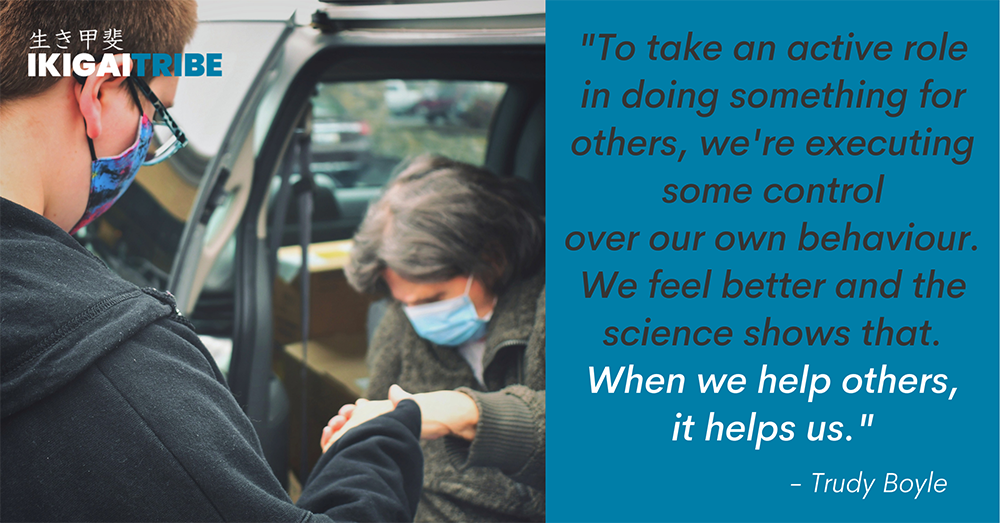 Nick believes that ikigai is tied to people’s contributions; by contributing to society, people may have a sense of significance – that life is meaningful and they have these valuable relationships.

Ikigia is tied to contribution and helping others, and it's tied to our roles. Those roles don't stop just because something bad happens. From those roles and the contribution we make to others, we have that snese of significance that life is meaningful, but also our life and what we're doing is meaningful. - Nicholas Kemp 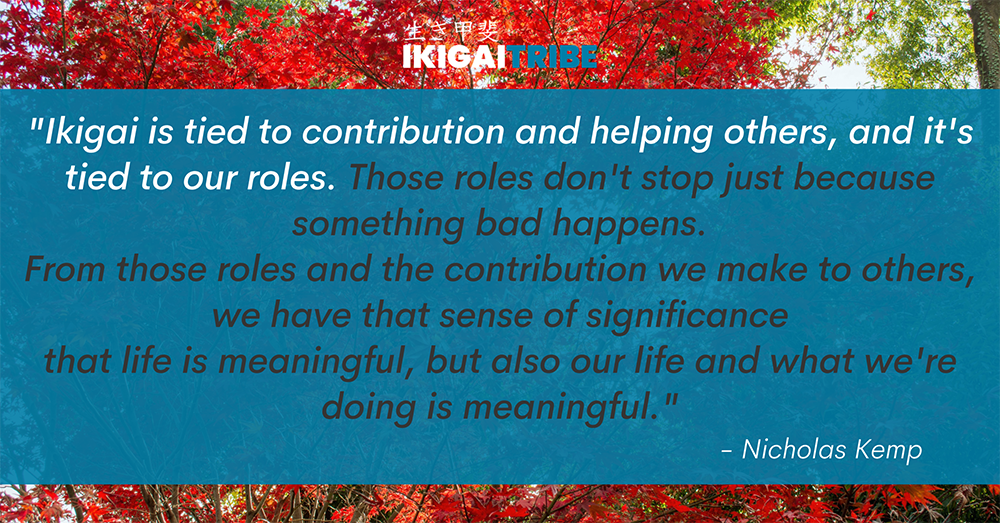 Learning to coexist with uncertainty and fear of death

Fear of death is something natural for everyone. However, if fear of death limits people from functioning well, Trudy thinks that it’s time for them to seek professional help. One of the important things when trying to co-exist with uncertainty is that people need company along the way. People cannot get rid of or fix uncertainty and anxiety, but they can live with them; there are activities that they can do that can help them co-exist with anxiety -- for example, learning new skills and building meaningful relationships.

Trudy relates it to the Japanese concept of arugamama: seeing things as they are. For her it is acknowledging that they have this illness and there’s nothing they can do with it; they understand it and learn to live with it.

Acknowledging death as a natural event

Trudy states that acknowledging death and preparing for it constructively are part of being human. People will never know when they are going to end their lives, but acknowledging that death will arrive eventually gives people an opportunity to embrace and live their lives fully – doing the things that they love and getting everything in order. This is not limited to the person with an illness; it can apply to everyone. People should communicate and express their emotions rather than live a life full of regrets. In Nick’s case, he recalls reconnecting with his father and expressing everything that he wanted to say through a letter, and organizing a party for his mother.

Trudy explains that to “live with outstretched arms” is the willingness to take a risk. People should be willing to be who they are and just do the things they really want to do – no holding back; allowing themselves to be a beginner and finding purpose in what they do. Trudy shares what she calls the 15-minute rule: doing things 15 minutes each day – anything that people would like to be good at; she believes that allotting 15-minute each day is doable and helpful for people in improving their skills. 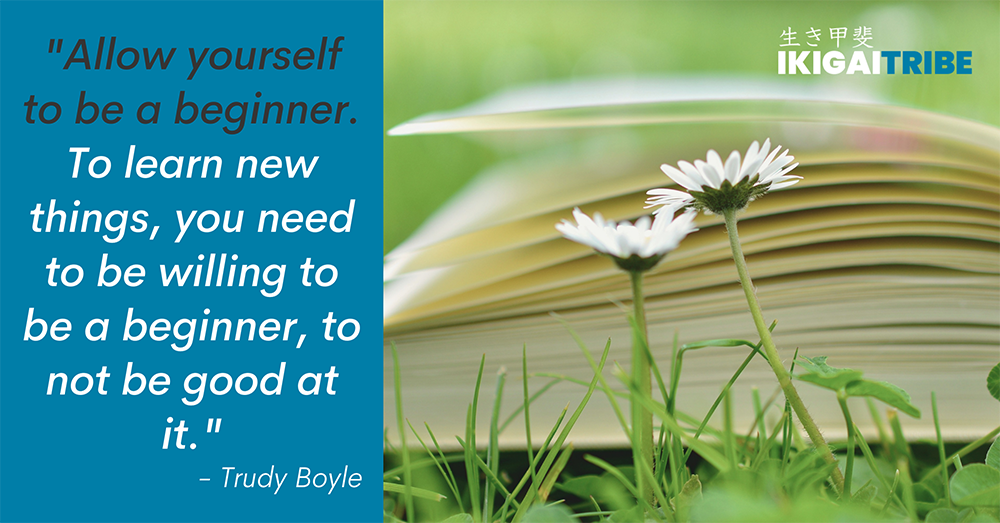 Trudy considers herself lucky even though diagnosed with a serious illness. As mentioned, before she knew about her illness, she had been teaching and helping people with cancer; she knows about Morita therapy, ikigai, and arugamama, which are all helpful for her; and even though battling a serious illness, she still gets to do things with her family, do things that she loves, and gets all the support that she needs.

Trudy shares that she feels ikigai in the work that she does; living and spending time with her grandchildren; her love for poetry and introducing poetry to others. She also feels ikigai through photography, cycling, and appreciating the beauty of nature.

To be diagnosed with a serious illness is not the end of everything; rather, it can be a new beginning, a way to look at life differently. Ironically, it might make you appreciate life more and think of the things that really matter to you. It is normal to experience fear and loneliness. However, we must not let these unpleasant emotions stop us from living life fully. There’s no better time to live than the present moment.