What do we live for?

Sometimes we question our existence and the reasons for our being. We look for ways to feel significant -- that we matter. We want to live a life that we are proud of, a life worth living. But how do we do that?

In this episode of The Ikigai Podcast, join Nick and Gordon Mathews, as they discuss how ikigai can be a factor that makes life worth living. 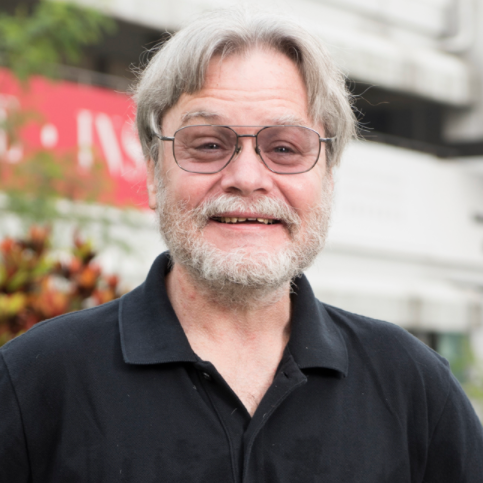 Gordon Mathews is an author and professor of anthropology at the Chinese University of Hong Kong. He has written several books including: What Makes Life Worth Living? How Japanese and Americans Make Sense of Their Worlds.

Gordon first went to Japan in the 1980s, where he came to know about ikigai; he remembers hearing about it from his friend when they went on a mountain climb: his friend explained to him that it is one’s purpose in life or the feeling of being alive. That encounter started his interest in ikigai; it fascinates him how it seems to be just a normal term for Japanese people, whereas in the West there is not one single word capturing this idea.

What makes life worth living?

The title of Gordon’s book, What Makes Life Worth Living, was a question he had been asking himself even before his first visit to Japan. He is a type 1 diabetic, and, since childhood, he has wondered whether his life might be shorter and how best he could spend his time. As a teenager, he experimented with psychedelic drugs, which also led him to question what should do with his life. When he came across the idea of ikigai, it resonated with these questions and offered the perfect opportunity to write a book. 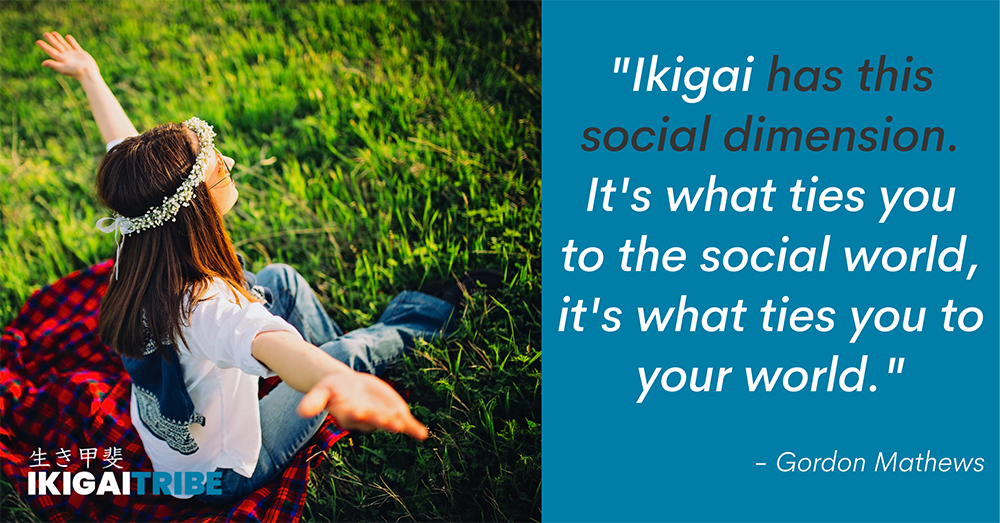 The first draft of his book was his doctoral dissertation. Gordon shared that he chose his topic because he wanted to do a project close to his heart; however, his instructors were doubtful because they felt the topic was something that could not be researched. However, he proved them wrong by focusing on ikigai and how it helps in shaping people’s lives. He believes that ikigai has a social dimension, and it’s what ties people to the world; it’s what makes life worth living -- it can be a family, work, a hobby, or a religious belief. 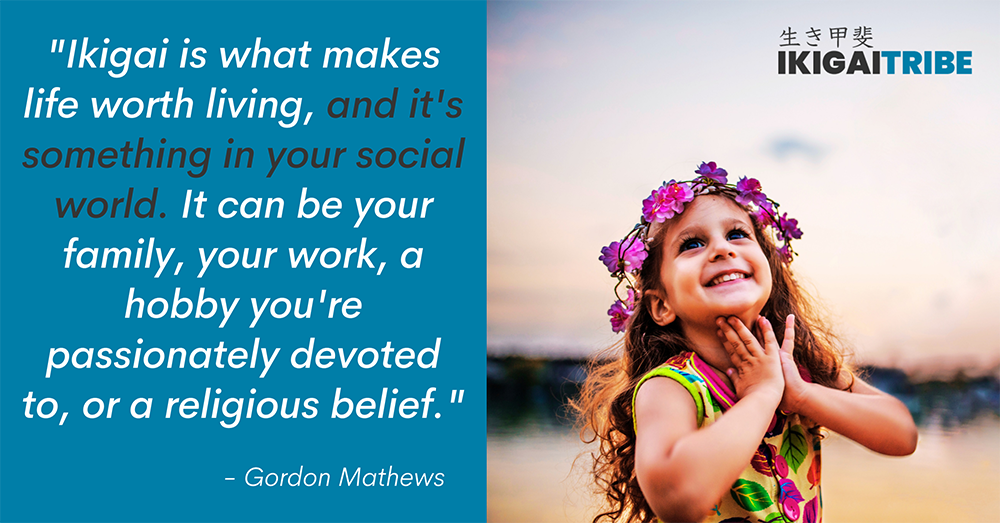 The process of making his book

Gordon shares that publishing his book took a lot of work. He interviewed 104 participants, narrowed his focus down to nine pairs, then focused even further on just 10% of the entire conversation. It was challenging to find participants from Japan and the US with similar backgrounds so that he could demystify cultural preferences by doing a cross-cultural comparison.

Gordon explains that in Japan, ikigai is a relatively specific concept and it has two aspects:

What I can say in terms of psychological judgement is if you have ikigai, you probably are considerably happier than if you don't, because it's something that you live for. - Gordon Mathews 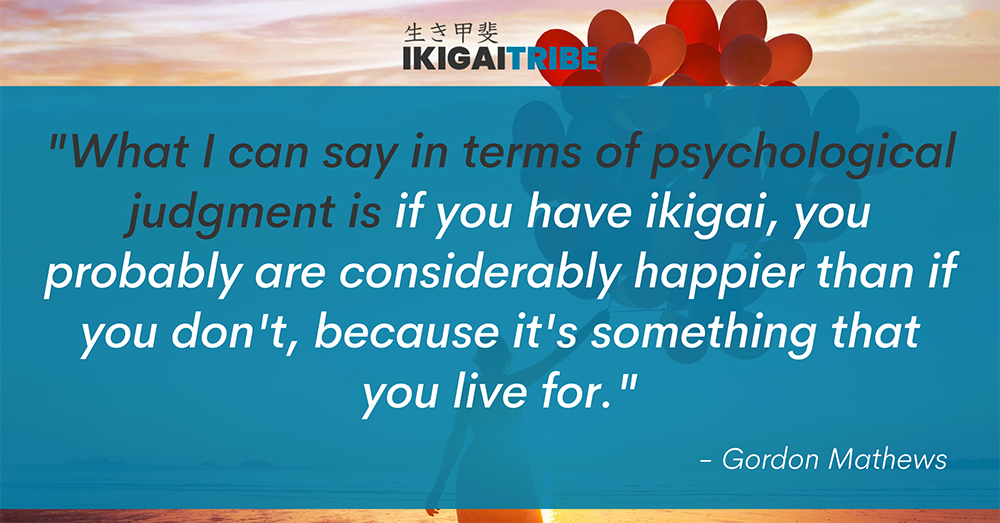 Gordon believes that people with ikigai are considerably happier than those without, because it’s something that people live for. Ikigai is something that does change over time because it depends on what circumstances people are in: having a child, undergoing a career change, retiring -- each life stage has its version of ikigai. The sudden changes in people’s lives like losing a loved one or a job, might be painful, but they also open up opportunities to find more ikigai -- something that will make their lives worth living.

Nick mentions Mieko Kamiya, a Japanese author who wrote about ikigai, and who he regards as the mother of ikigai psychology. Gordon agrees about Kamiya’s importance and shares a memorable quote from her book: “Maybe the only people who really feel ikigai are those people with terminal cancer.”  She thought this might be the case because people get caught up in their daily lives and forget what’s really important -- but if they are more aware that they have limited time to live, they would focus more on activities that make them feel more alive.

Gordon shares that one particularly memorable interview was one he did with an older Japanese man who talked about his first love who died during World War II. Although the man did not state it directly, Gordon could see that the man still yearns for his first love and his ikigai was his dream of another possibility that both of them could be together. Gordon states that what he learned from his interviews is that people really do want to talk about themselves, and can learn from having deep conversations.

Gordon explains how people are shaped by cultural and personal fate: they are formed by the family and/or culture they are born into.

Going back to the abovementioned social negotiation or ikigai negotiation, Nick suggests that this is an ikigai killer since it influences people to listen to others’ opinions about their life, rather than pursuing what they really want.  Gordon says that it happens a lot, which is why he always tells his students that ikigai is an individual matter, and the best thing they can do is to have self-knowledge to make their choices right. 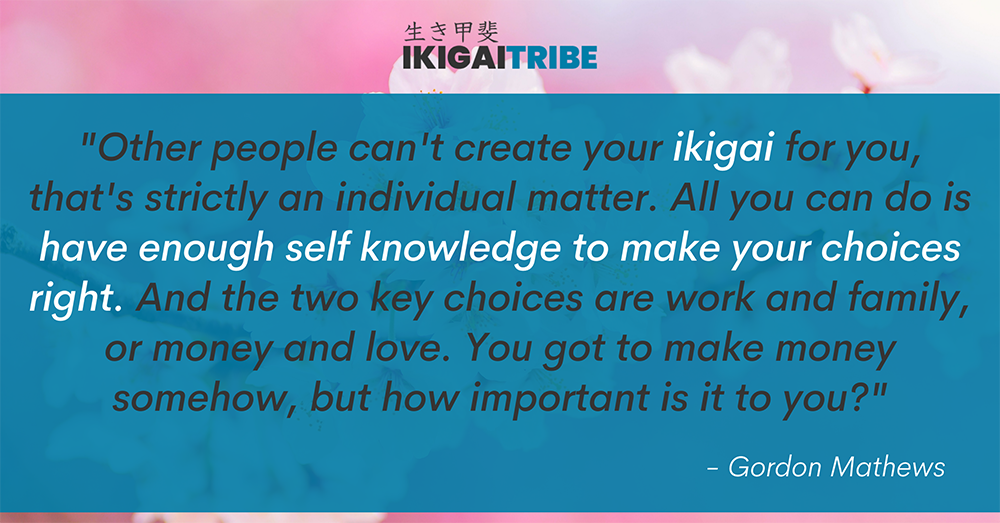 Gordon mentions that like all things transient, ikigai is precarious; he thinks that people can lose their ikigai -- it does vanish. However, having ikigai at some point in their lives is worth it, rather than experiencing none at all.

Just like all things are transient, all ikigai is precarious. It does vanish, it will always vanish at the end of the day. Nonetheless, having it is worth it. - Gordon Mathews 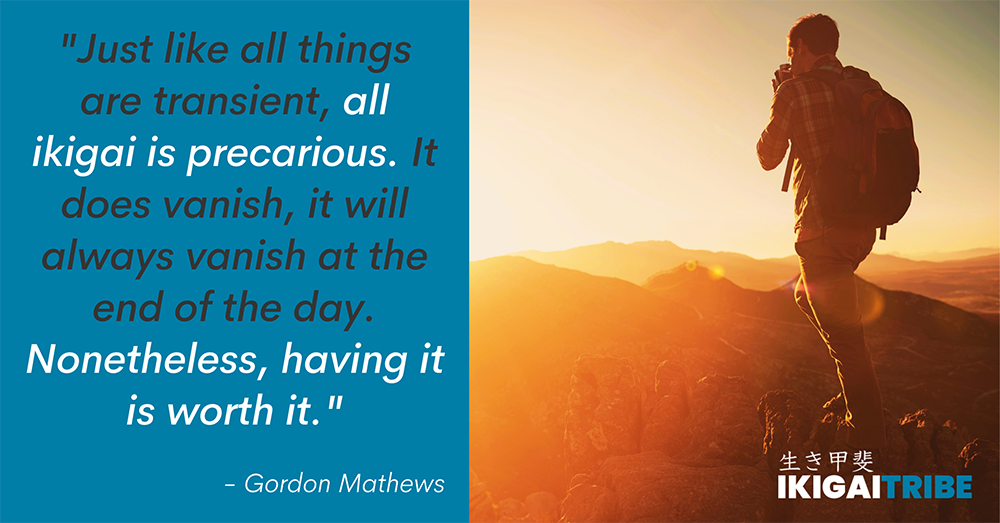 Effects of technology on ikigai

Asked about the possible effects of technology on ikigai, Gordon shares that he is grateful for having the internet because it has made the world more convenient and offered more options to people than in previous times. However, having plentiful choices can be problematic because it can be difficult for people to focus on one thing, which may hinder them in finding out what they really want or who they really are.

Gordon gives his opinion about the protests in Hong Kong; he thinks that the protesters, and what they are fighting for, is an example of a short-term ikigai. The protesters don’t know what will happen and realise they are putting their lives at risk, but they persist regardless because they believe in the cause; the willingness to give up their lives for something important for them is a form of ikigai.

There’s no manual on how we can live a life worth living, we need to figure it out ourselves. We learn from daily experiences and encounters with different people, which provides a great sense of what we really value in our lives. This helps in shaping our ikigai, which makes a life worth living. The things that we value depend on the circumstances that we are in and it could change over time; it’s a continuous quest of the things that make us happy as we grow older.