Ikigai is defined as one’s reason for being, but what are the things that we need to consider to find our purpose? How do we find ikigai -- and is it hard to attain?

In this episode of the Ikigai Podcast, join Nick and Ken Mogi as they discuss how people can find ikigai using the five pillars of ikigai. 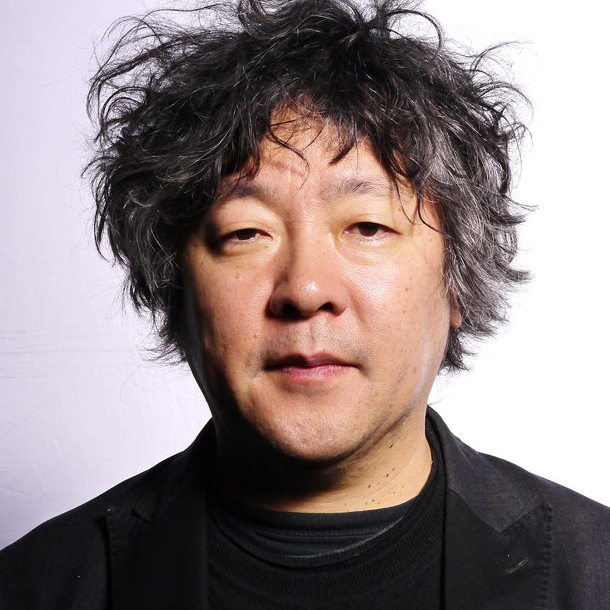 Ken Mogi is a neuroscientist and has a Ph.D. in physics from the University of Tokyo. Ken works at the Sony Research Laboratory, teaches at several universities, and travels abroad to give lectures on concepts such as ikigai and the brain. He has also authored over 100 books, including The Little Book of Ikigai.

Ken describes ikigai as the spectrum that reflects the complexity of life. He believes that it is important to understand that oftentimes, the simple things are what make people happy, and ikigai starts from very small things. He thinks that ikigai is an integrating concept -- the umbrella term to describe everything that gives people joy.

The Japanese approach to ikigai is different from that in the West; in particular, Japanese people don’t have a formal definition for the word, and it is a normal, embedded practice in their daily lives.

The Little Book of Ikigai

Ken’s book has two titles: The Little Book of Ikigai and Awakening Your Ikigai. He shares that it is a typically British practice to put little in the title; in the American market, however, people don’t like the idea of the little book because they prefer a more grand vision -- hence the alternative title, Awakening Your Ikigai.

Ken mentions in his book the five pillars of ikigai: starting small, releasing yourself, harmony and sustainability, the joy of little things, and being in the here and now.

The first pillar is “starting small'', and Ken associates it with the concept of kodawari, which he defines as an approach where craftspeople take extraordinary care of the fine details of their work -- people can achieve their goals by taking small steps.

Japanese people do understand that there is no way to attain perfection, but they still appreciate the effort that one nevertheless puts in to always striving to be better. The important thing is the process -- trying to attain their goal and learning from their attempts to do so. 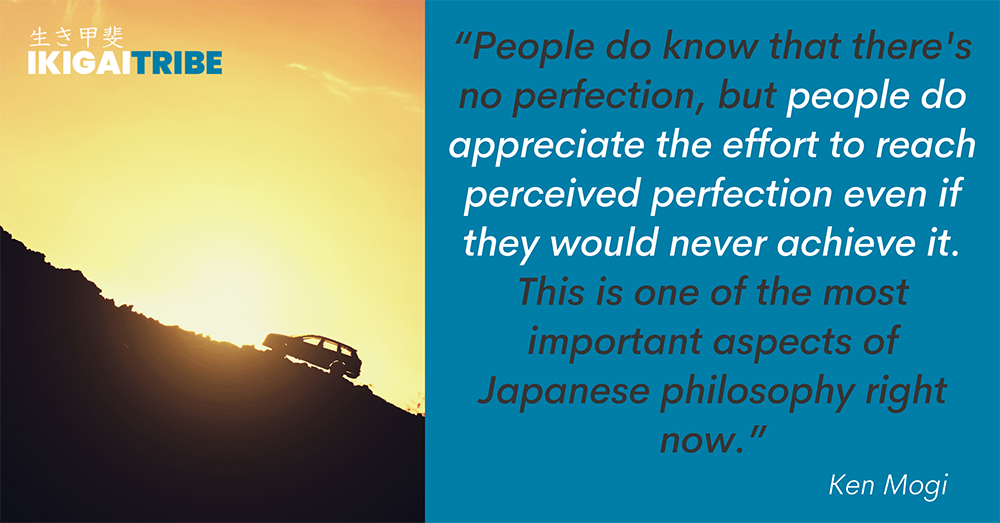 The second pillar is “releasing yourself”, about which Nick shares the following quote from Ken’s book:

"Accepting yourself is one of the most important and difficult tasks we face in our lives. Indeed, accepting oneself is one of the easiest, simplest, and most rewarding things you can do for yourself. A low budget maintenance-free formula for being happy."

Releasing yourself is about finding happiness through acceptance. Ken shares that he, himself, found it hard to accept himself since he used to be the “nerd”. However, at the end of the day, he realized that he wouldn’t want to be anybody else, and wouldn't trade places with others -- which is what others can achieve as well; each person has his/her discrete views about life and what they want to be in the future. He explains that people were born with unique traits, and while they might be perfect, they can grow through experience, accept their individuality, and stop comparing themselves to others. Everyone can be comfortable pursuing their own way of engaging with life.

The third pillar is “harmony and sustainability”, and Nick shares another quote from Ken’s book:

"Sustainability applies not only to man's relation to nature but also to the modes of individual activities within a social context. You should show adequate consideration for other people and be mindful of the impact your actions might have on society at large. Ideally, every social activity should be sustainable." 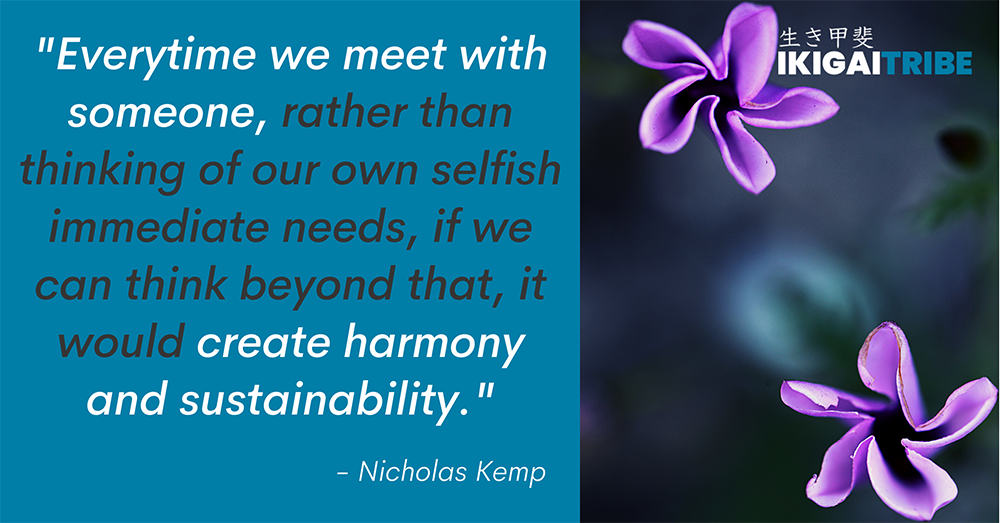 Nick thinks this is great advice and says that if people could think beyond their selfish needs, it would create harmony and sustainability. Ken believes that harmony and sustainability are one of the best-kept principles of Japanese society: Japanese people are known for not speaking out and not taking any different positions. However, although they don’t speak out, people do often have different opinions -- they just don’t feel that being outspoken solves any social issues or makes progress. Ken shares the example of the Japanese imperial family, the oldest monarchy in the world, who have been able to keep their system for a long time, and who do not publicly take any political positions at all.

The joy of the little things

The fourth pillar is “the joy of little things”. Nick reads another passage from Ken’s book:

"No matter where you are in the world, if you make a habit of having your favourite things sooner after you get up, for example, chocolate and coffee, dopamine will be released in your brain, reinforcing actions getting up prior to the receipt of the reward."

Ken proposes starting the day with some ikigai and getting into the habit of using the little things to create pleasurable, rewarding experiences that facilitate contentment. With these embedded in one’s routine, it doesn’t matter if people get recognized for their performance; no matter what, they have still experienced moments of happiness. He shares that his own routine involves  starting the day with some writing or reading; his day goes on without him wasting any period -- he is in an almost constant state of flow.

The fifth pillar is “being in the here and now”. According to Ken, children value the present because they have no definite idea of the past or future, so to be present helps people to bring out their inner child. He says bringing out people’s inner child in the era of information technology is a successful attitude that people can take in; it’s a key attribute when they want to bring happiness to their lives and those of their loved ones. 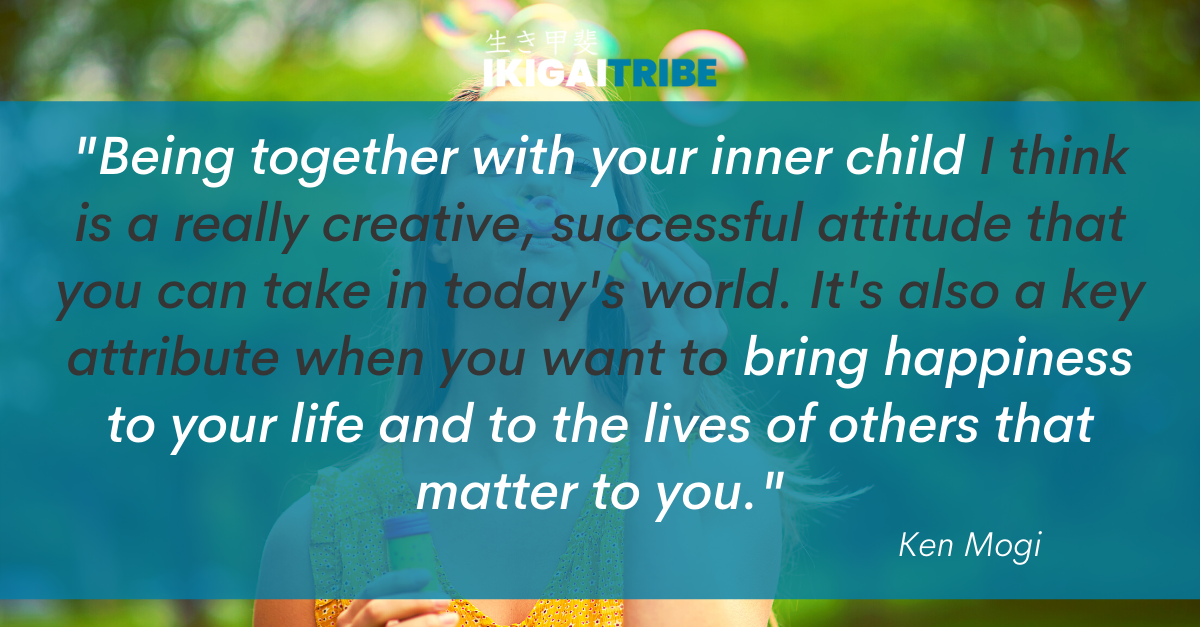 Being childlike gives people infinite possibilities. Their existence is not defined by any social roles or status; it’s an important technique to remain creative, free, and have continuous learning.

When asked if there would be many people who don’t have ikigai in Japan, Ken states that Japanese people have a great knack for finding small joys in the most mundane moments; their idea of a meaningful life is more modest and more down-to-earth than that typically found in the West. He thinks that the ikigai concept is something that would touch many people’s lives and change them for the better, since it leads people to have a creative and enjoyable life.

Ikigai doesn’t have to be something extravagant; we can find it even in the simplest things -- anything that gives us joy. It helps us to understand that we don’t have to make our lives complicated, but, rather, that we can simply focus on accepting and being grateful for the things that we have and making the most out of things rather than searching for something that we don’t possess. Whenever we experience discontentment, it is important to reflect on what we are focusing on, see whether we can/should readjust, and think deeply about what things really matter to us.