Skip to content
In this episode of the Ikigai Podcast, Nick and Naoko Hosokawa explore the concept of kotodama and how the Japanese people apply this concept in modern times.

The love for languages and communication

"In general, I'm interested in language and communication. So when I'm having a very good, interesting discussion with other people, that gives me really great pleasure that this exchange of ideas is something that I appreciate a lot. So that's a moment when I feel that this is the most beautiful part of life in general. So I would say that language and communicating gives me a sense of ikigai." - Naoko Hosokawa 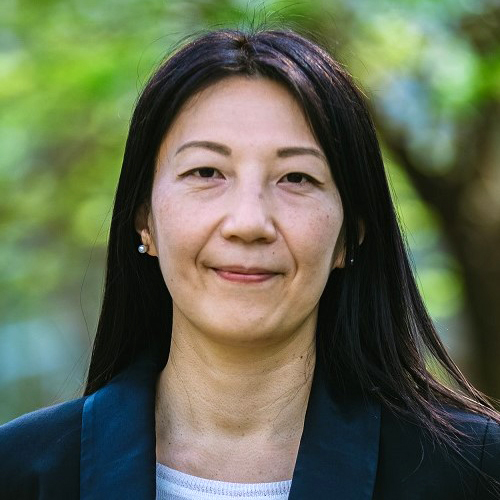 Naoko Hosokawa is a postdoctoral fellow at the University of Tokyo. She obtained PhD in oriental studies from the University of Oxford in 2015, holds an M.Sc. in International Relations from the London School of Economics and Political Science, an M.A. in Political Science from Columbia University, and a B.A. in Policy Management from Keio University. Her main fields of research are sociolinguistics and media discourse analysis related to the question of national and regional identity. She was previously an invited researcher at the French Network for Asian Studies, CNRS ( French National Centre for Scientific Research ) France, the France-Japan Foundation, EHESS Paris, and the European University Institute. Her recent publications include articles on Ethnicity and Nationalism, and Myths in Crisis: The Crisis of Myth.

Article 1 - Kotodama: the multi-faced Japanese myth of the spirit of language

Article 2 - From reality to discourse: analysis of the ‘refugee’ metaphor in the Japanese news media

Nick found Naoko through her article on kotodama, “Kotodama: the multi-faced Japanese myth of the spirit of language.” Naoko shares that kotodama is a popular myth of the spirit of language; the origin of the term is unknown, and the only thing that is clear from the earliest use of the term is that kotodama was always linked to the idea of Yamato, the old name of Japan. Hence, the notion of kotodama is often linked with Japanese linguistic identity. Moreover, the narrative of kotodama has been repeatedly interpreted according to non-linguistic factors surrounding Japan, as well as the changing idea of “purity” of language in Japan.

I think we can say that Kotodama is a popular myth of a spirit of language. And people often use the expression such as "if you keep saying what you would like to achieve in your life, you'll be able to achieve it in reality thanks to Kotodama." So that's a very general idea of Kotodama today. However, the origin of the term is actually unknown. - Naoko Hosokawa 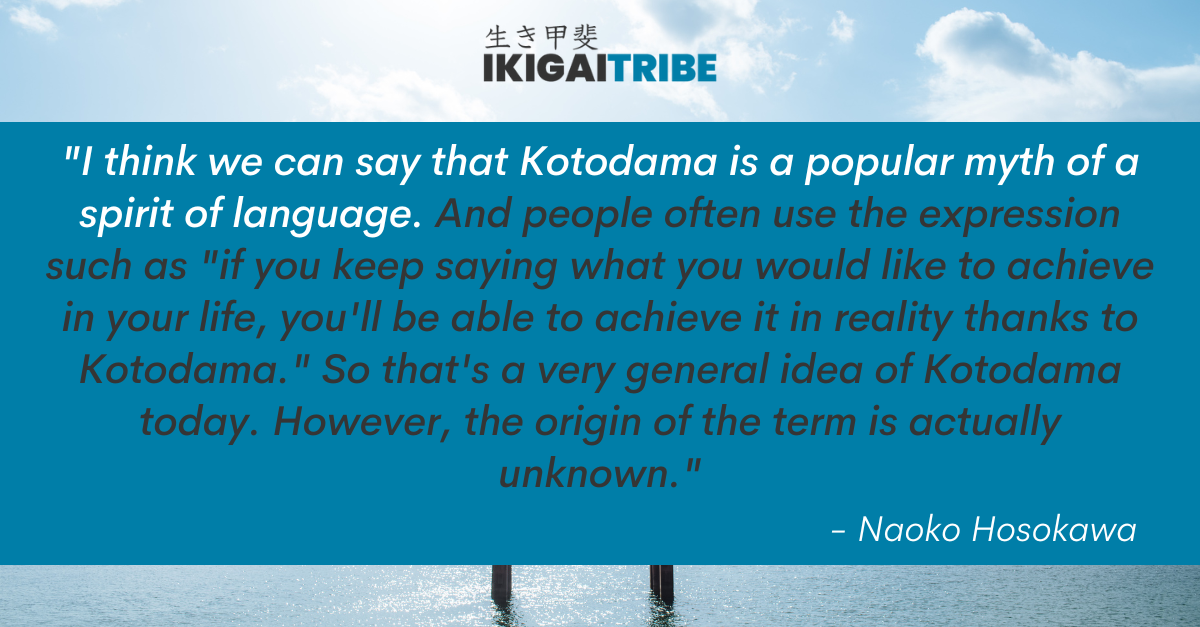 In her article, Naoko mentioned three examples of kotodama: ancient, war-time, and contemporary. She shares that although kotodama’s exact origin is unknown, it seems that it is some sort of ancient ritual of Shintoism. The oldest record of the word is found in Man’yoshu (a collection of poems) from the 8th century. It is considered to be some form of animism; the idea of kotodama was closely linked to the idea of God and the idea of country.

A type of word karma

Kotodama is similar to “word karma.” Naoko states that its general idea is the soul of language, koto meaning language or words, and dama meaning soul or spirit. She believes that it is the core of the cultural identity of Japanese society; that kotodama is related to the importance placed on the use of language in Japanese culture, and it is often mentioned when people talk about Japanese identity or Japanese tradition in general.

Naoko explains that during WWII, the idea of kotodama was coupled with the idea of national polity. The government introduced the idea that the use of “pure” and traditional Japanese language was the core of their national unity and social virtue. During that time, the use of Western loanwords was banned because they were considered the language of the enemies. Hence, the words were replaced by Sino-Japanese words. For instance, the term ragubi which was derived from the English word rugby was replaced by tokyu (fighting ball); another one is the word anaunsa from the English word announcer, which was replaced by the Sino-Japanese word hosoin (broadcasting person).

Naoko shares that Japanese people still use the term kotodama today; they can often hear the idea of kotodama in the context of the use of loanwords, and people associate the term with cultural and linguistic identity. Some think that the increasing number of English words in Japan is against the concept of kotodama – they argue that people should use loan translations similar to the 19th century when they used a lot of loan translations.

Nick thinks that some English loanwords take on slightly different meanings in Japan. An example he gave was when his brother-in-law offered him a coke and called it a juice, which Nick finds kind of unusual. Naoko explains that it is quite a common linguistic phenomenon to have slightly different meanings when borrowed from a foreign language. For instance, in the German language, they refer to mobile phones as handy, whereas handy has a different meaning in the English language. She states that it is normal for it to happen over time – the slight change of meaning is a natural phenomenon in the history of language.

Naoko wrote a paper about refugees in Japan, “From reality to discourse: analysis of the ‘refugee’ metaphor in the Japanese news media.” Among the developed countries, Japan is the last country to accept refugees; she states that one of the reasons for it is because the  Japanese people have the idea that if they accept many refugees, the harmony in their country will be corrupted. But aside from this reason, she wants to find another way to explain why the Japanese population is not so engaged in refugee protection, thus, she started to look at the topic of refugees in Japan. She believes that the Japanese traditional idea of harmony can be applied in a positive way to harmonise Japanese society with people from other countries.

Nick states that it reminds him of the term Ken Mogi used, nagomi (harmony), he thinks that the goal is to find harmony and balance between Japanese society and immigrants.

In her paper, Naoko looked at the evolution of the term nanmin (refugee) as a metaphor. In 2007, a Japanese journalist popularised the term “net cafe refugee” which refers to people who do not have a fixed address and sleep often in cafes. The term provoked a lot of controversies; the association of internet cafes did not like the expression used because of the wrong association between refugees and criminality urging internet owners to file a complaint against it. However, Naoko shares that the use of language is natural and that people cannot control the use of the term, and people started using the expression to create other metaphors.

Aside from the term refugee, other words are used unconventionally. For instance, Naoko shares, the expression loss; often loss is used when people lost something or if someone passed away, but in Japan, they use the term to describe something that has finished: when a festival finished, they would refer to it as “festival loss” or if a TV series ended, they would state that the series loss. 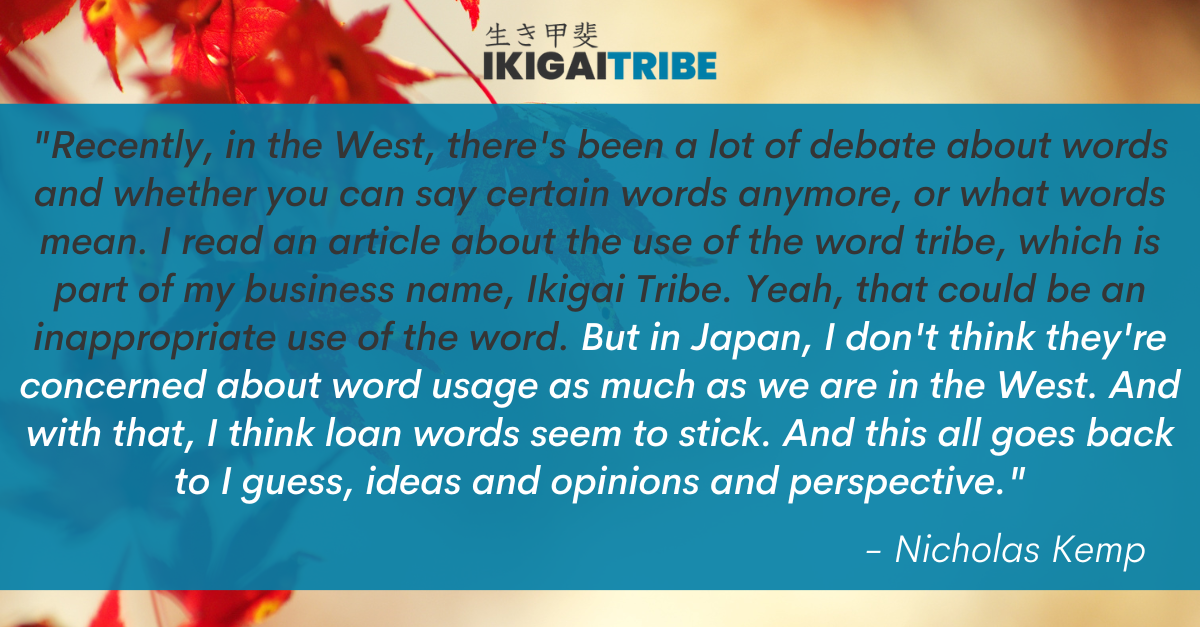 Nick sees a difference in how people in the West are more concerned about word usage than people in Japan. Hence, they continue to use loanwords in Japan.

Double standard for the Japanese language

Nick asked Naoko if she thinks that there is a double standard with the Japanese language - wanting to maintain the purity of the Japanese language yet creating loanwords, instead of using direct translation, for terms like nanmin (refugee) where they are used in a context that is unconventional or inaccurate.

When asked about her impressions of some misunderstood Japanese concepts like ikigai and wabi-sabi, Naoko states that it is part of the natural phenomenon – it happens a lot of times in many cases all over the world. In the case of the Ikigai Venn Diagram, the definition of ikigai may have shifted, but it happens contrariwise; the Japanese have taken many Western words and used them differently. Another example is the concept of wabi-sabi, being a hard concept to define, Naoko believes that not all Japanese people use it in an appropriate way or with the actual meaning of the concept, thus, people may have different interpretations of the term.

Naoko shares that when people ask what her favourite word is, she would say that it is lorem ipsum, a word that comes up as a blank document. She finds it interesting that its origin was from the Latin expression dolorem ipsum (suffering itself); no one likes suffering itself, but because of those sufferings, people end up being stronger. Knowing about this origin of lorem ipsum, Naoko shares that every time she sees a blank document, she thinks of it as suffering to start writing, but to come up with a good piece, she needs to take on the suffering.

Naoko shares that her ikigai is her work; something that she’s passionate about are languages and words, thus, she decided to become a researcher in linguistics. Moreover, she’s interested in communication; having a good and interesting discussion with other people – exchanging ideas with others is something that she appreciates and thinks of as the most beautiful part of life.

Language is part of a nation’s identity; it is distinct in every culture – each has its own unique use of words. However, language may evolve due to modernization. Nowadays, it is natural for countries to take on foreign words and use them as their own. Therefore, it is essential to understand a country’s use of language to better appreciate its culture.