Skip to content
In this episode of The Ikigai Podcast, Nick speaks with Ted Bonnah about the social need for ikigai in today’s society.

There are many sources of ikigai

"Ikigai can be a lot of different things. It can be the hobby that gets you through nine to five job; it can be the ones that you work so hard and then once a year you're on the festival holding fireworks in your hand and getting burned up. But you don't care because this is the one day of the year you feel alive." - Ted Bonnah 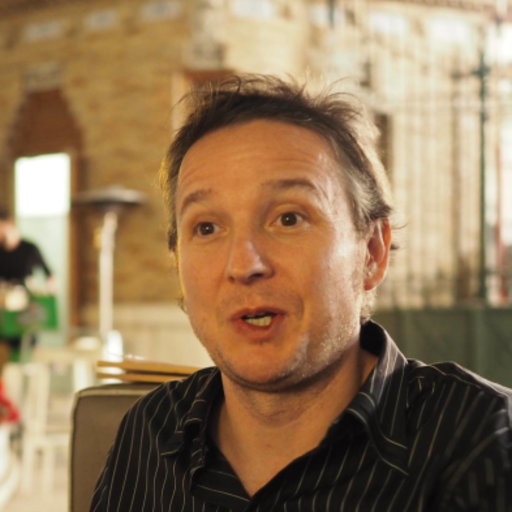 Ted Bonnah is an associate professor at Kobe International University and has a Ph.D. in Global Society Studies. Originally from Canada, he is now a long-term resident of Japan and has written papers on a wide range of topics in modern Japan: from Gudetama, a cartoon character popular with millennials to Powa-hara (power harassment).

Struggling with life in Japan

Ted shares that Japanese people have a strong work ethic and that it’s hard for them to quit even though things are tough. In the West, whenever people encounter difficult situations at work, it isn’t hard for them to leave and just quit their jobs. However, that’s not the case with Japanese people; Japanese people take pride in their work, and quitting isn’t an option for them even though being faced with stressful situations – it is part of their identity. Other forms of Japanese social pressure involve people being stuck with dead-end jobs that they can’t afford a decent kind of living, and Japan being home for undiagnosed mental illnesses: some Japanese people walk around and talk to themselves, and others would just ignore it.

Do all Japanese people have ikigai 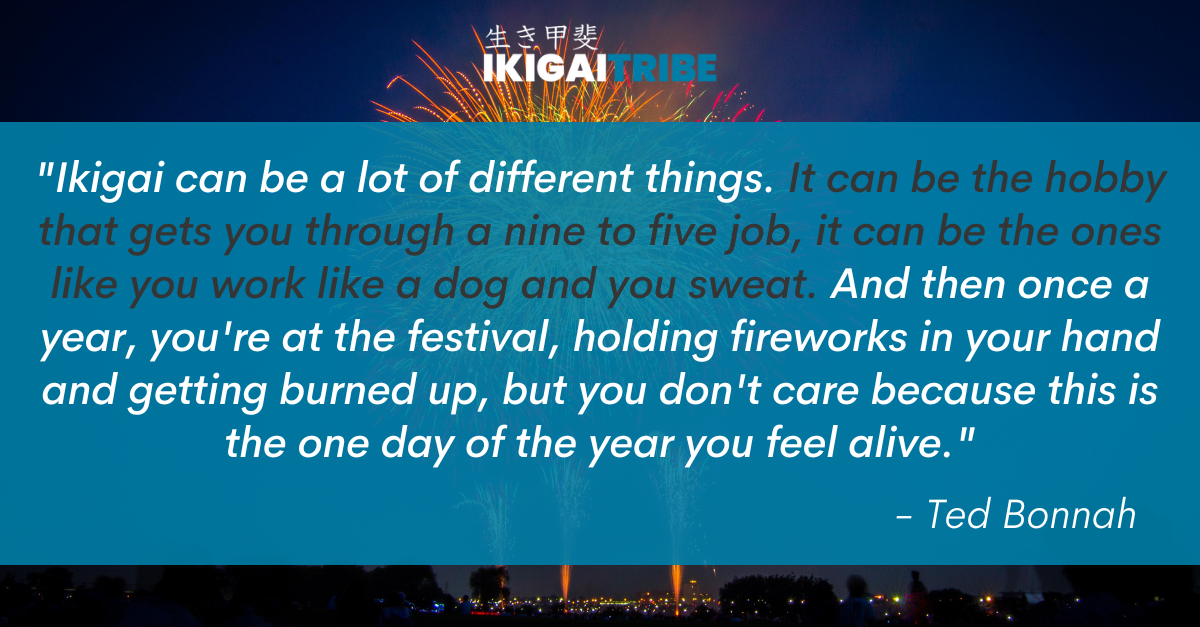 Ted thinks that some Japanese people find small ikigai. For instance, someone who dreams of becoming a world-class painter ended up doing paintings for a billboard; although he didn’t get to become a renowned artist, he still managed to do the thing he’s passionate about, which is painting. For some people who find a great purpose in their work, that could be their ikigai. However, those who struggle with their work can find hobbies that can be the source of their ikigai.

The hard part of finding an ikigai and going with it is coming from a background of blue collar workers. Where it's not it's not yarigai no shigoto, it's yarushikanai, you gotta do it to survive. So those are the levels. The lowest level is yarushikanai, I have to do this job or else I'm gonna starve. Yarigai garu, I'm gonna have a good lifestyle, but it's also, I feel like I'm doing good enough, it's not my dream. And then you get ikigai, it's my dream. - Ted Bonnah 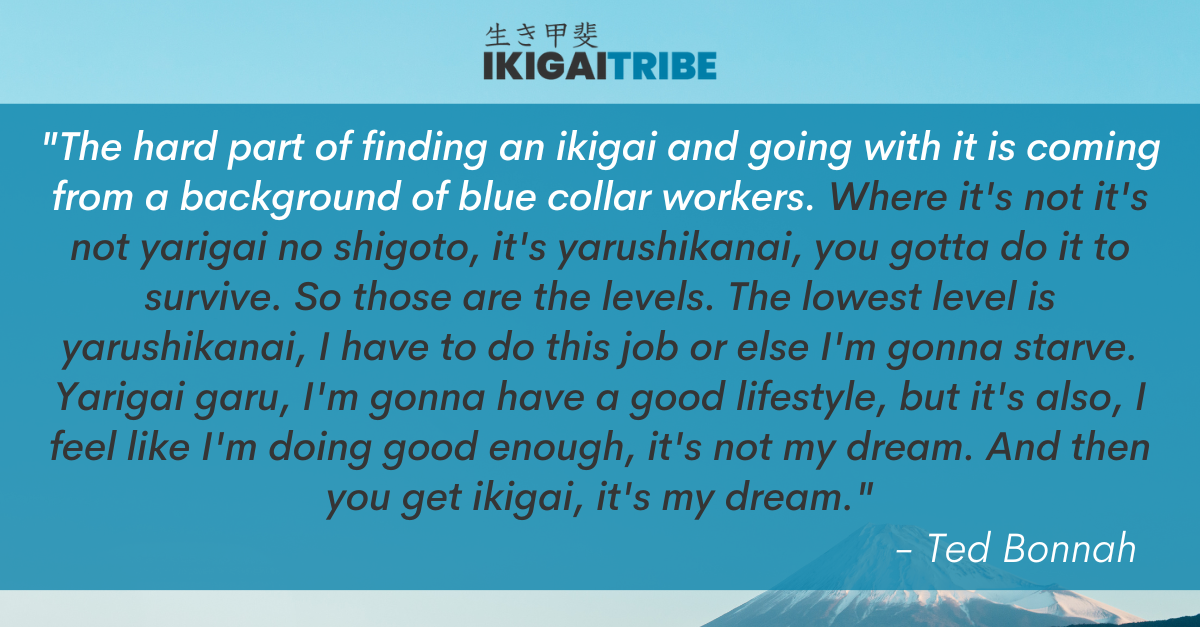 Nick thinks that for the Japanese, ikigai is something that is private – something personal for them; it is a big life-defining goal that they commit their lives to. 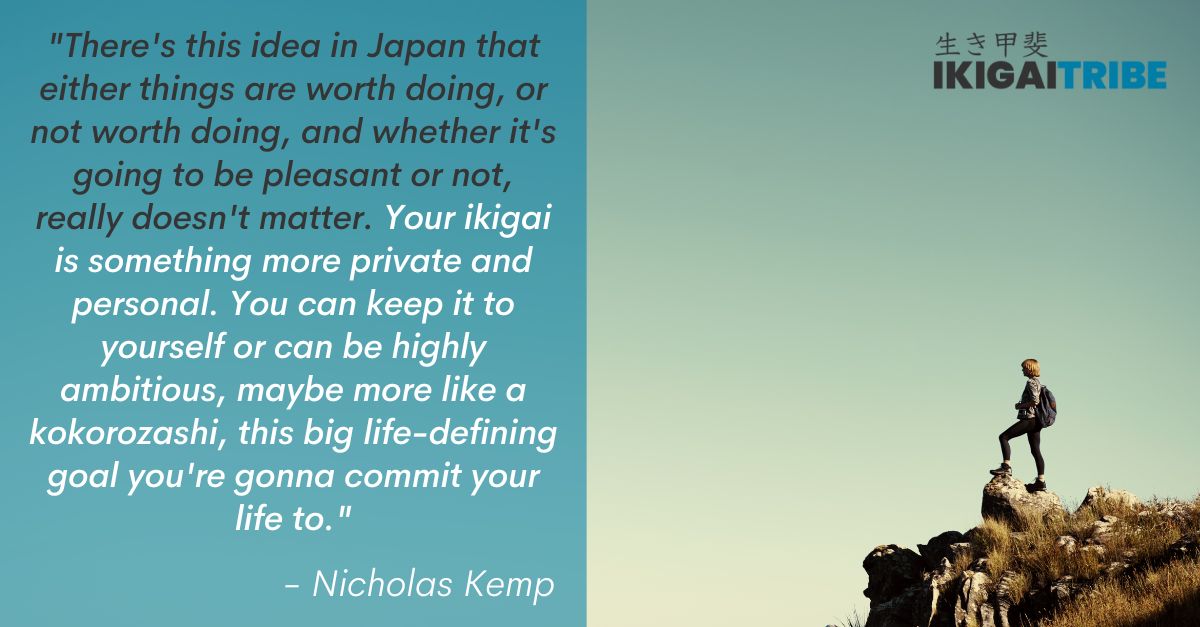 The Western lens on Japanese culture

Regarding the case of some Japanese concepts being romanticised in the Western culture, Ted believes that it is because of people’s curiosity – they want to look for something that they believe doesn’t exist in their culture. For instance, after finishing university, he had the urge to go to Japan because of a Japanese movie he saw. He thinks that Japan has a unique culture. Years later, when he came back to his hometown, he met a Japanese person doing research for the same reason that she found Newfoundland, Ted’s hometown, as a unique and interesting culture. Hence, Ted thinks that taking a concept from a different country is more like a coping strategy for people to survive the culture that they’re in.

How to know if it’s ikigai

One way to feel ikigai is through creative expressions. However, it does not apply to everyone. Ted explains some people who do arts and crafts inherit them from the older generation – it is something that is passed on to them; sometimes they don’t have a choice but to continue with their traditions – that is not something that can be considered as ikigai. Nick thinks that ikigai is when you have the freedom to express yourself through some form of creativity, like writing or music – doing something that you enjoy and not being forced to do so.

Ted wrote an article about gudetama, a popular character among millennials. Gudetama is a raw egg, and a Sanrio character. In the first episode, they show an egg being cracked and put on the rice, however, once cracked the egg doesn’t want to leave its place — being lazy, which Ted thinks is a representation of millennials who don't want to do their job and complain about it. A lot of young Japanese people aren’t excited about their work, but watching gudetama makes them feel better – it is something that they can relate to and make them laugh about their situations. Although, Ted thinks it is conveying to people how to deal with someone who goes to work with depression – just ignore it and push people to do their job.

Ted shares that his ikigai used to be teaching, he’s a student-centred teacher and wants to motivate people. Then he got into researching and writing, which are the current sources of his ikigai. Another thing that impacts his ikigai is his son, who has special needs. He enrolled his son in a Japanese school but he thinks that it isn’t helping. Hence, he decided to join a Facebook group for people with disabled kids, where he shares everything he would do with his son. That gained attention from other members of the group, and he started getting requests to write a book chapter about it. That gave him the idea to start giving workshops about power harassment to Japanese companies, and how to deal with special education children, which he considers as his ikigai as well.

I really think meaningful work where it impacts others positively and you get a great sense of satisfaction from it can be a source of ikigai. I'm certainly not saying it's not your work or your job, it could be. But it really seems to be connecting to others in a meaningful way. - Nicholas Kemp 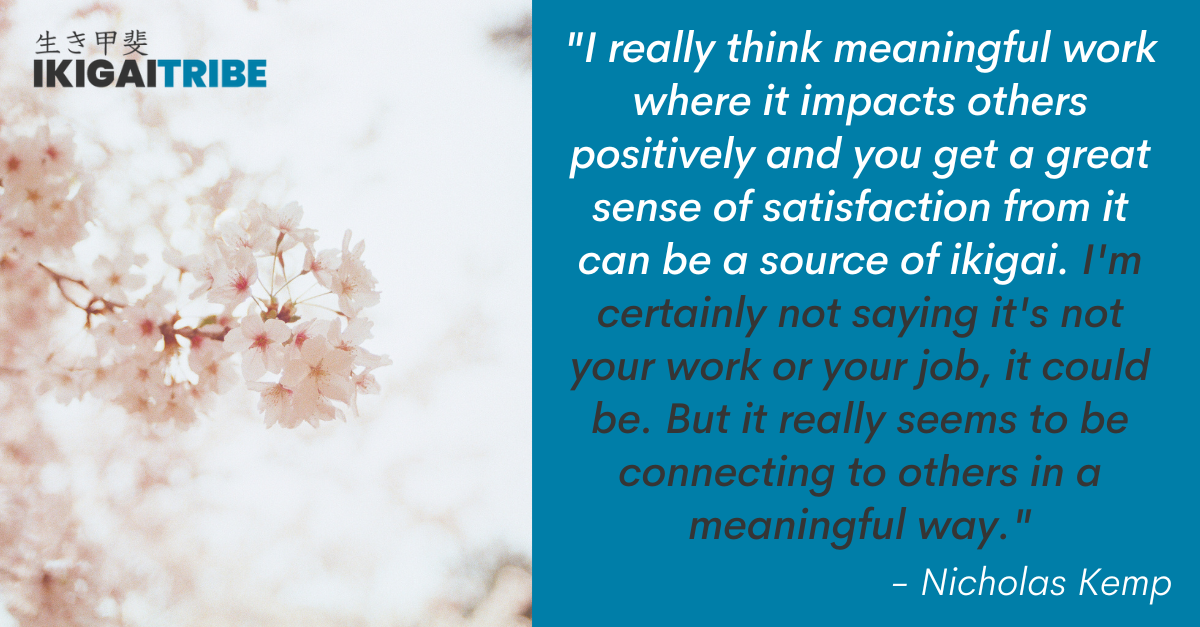 Nick believes that is what ikigai is all about – connecting to others in meaningful ways; having significant works that impact other people positively can be a great source of ikigai.

Some people think that work should be their ikigai because that is what they do most of their lives. However, when things get complicated, it is hard to feel ikigai with your work -- in fact, it is rare to feel ikigai in our work. Sometimes we need to look for other sources that can contribute to our ikigai. That is why it is vital to find these little things – be it the hobbies or relationships that we have – that keep us motivated amidst some difficulties we encounter.