Skip to content
In this special episode of The Ikigai Podcast, guest host Dr. Caitlin Kight speaks with Nick Kemp about his recently published book Ikigai-kan: Feel a Life Worth Living.

Offering a Japanese perspective of ikigai

"So the main message of the book, I guess in a nutshell, was to explain to the reader that ikigai is something you feel, not chase or earn. So I wanted to offer a Japanese perspective of what ikigai means.

While it's a unique cultural concept to Japan, it's also a universal concept. And I wouldn't really call the book a self-help book. For me, it was really a deep dive into the psychology of ikigai. I guess part of what I hope to achieve for the book is to help the reader find a way to feel a more fulfilling and meaningful life. And there are frameworks and advice in the book to help the reader." - Nicholas Kemp 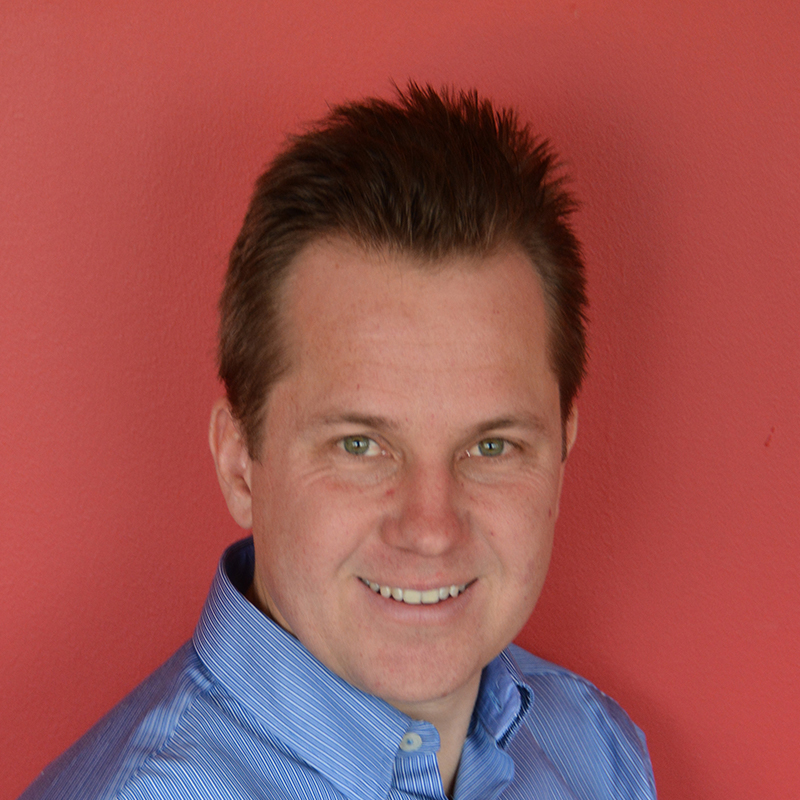 Nicholas Kemp is a father, husband, Japanologist, researcher, solopreneur, and author of IKIGAI-KAN: Feel a Life Worth Living. He is the founder and head coach of Ikigai Tribe, a small community of educators, psychologists, coaches, and trainers who serve their personal communities using the ikigai concept.

GET THE BOOK ON AMAZON

IKIGAI-KAN: FEEL A LIFE WORTH LIVING 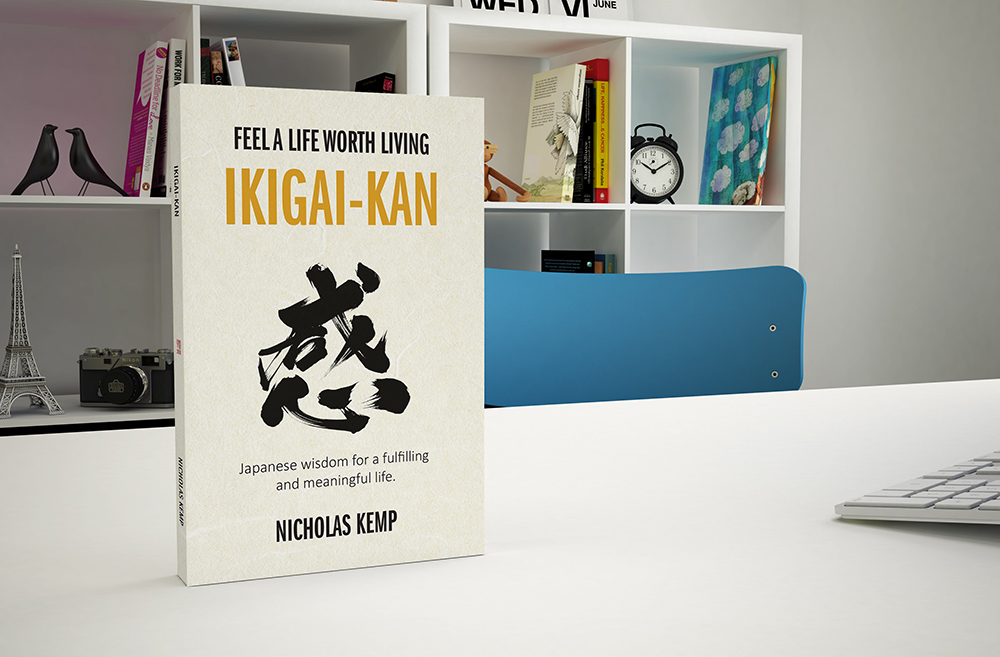 Nick recently finished writing his book, Ikigai-kan: Feel a Life Worth Living. He shares that his book aims to inform people that ikigai is not something that they feel, chase, or earn. Rather, it is a spectrum of all people’s past, present, and future experiences in their lives that have been, are and will be worth living. Across the 10 chapters of his book, Nick looks at different perspectives of ikigai and provides context for these perspectives by exploring different aspects of Japanese culture. Moreover, he links these perspectives to ideas, philosophies, and practices, to convey that ikigai is a cultural concept that can resonate with readers from around the world. Rather than thinking of it as a self-help book, he shares that it is more about introducing the psychology of the culturally unique yet universal concept of ikigai. Hence, he provides frameworks and advice which he hopes will be helpful for the readers in living a more fulfilling and meaningful life.

Inspiration for writing the book

Having lived in Japan for 10 years, and being married to a Japanese person gave Nick a better understanding of Japanese culture. It upsets him to see books that offer a romanticised view of ikigai – some misleading information on the concept – especially the Ikigai Venn Diagram that is circulating the web. That is what inspired him to write a book on ikigai.

The goal in writing the book 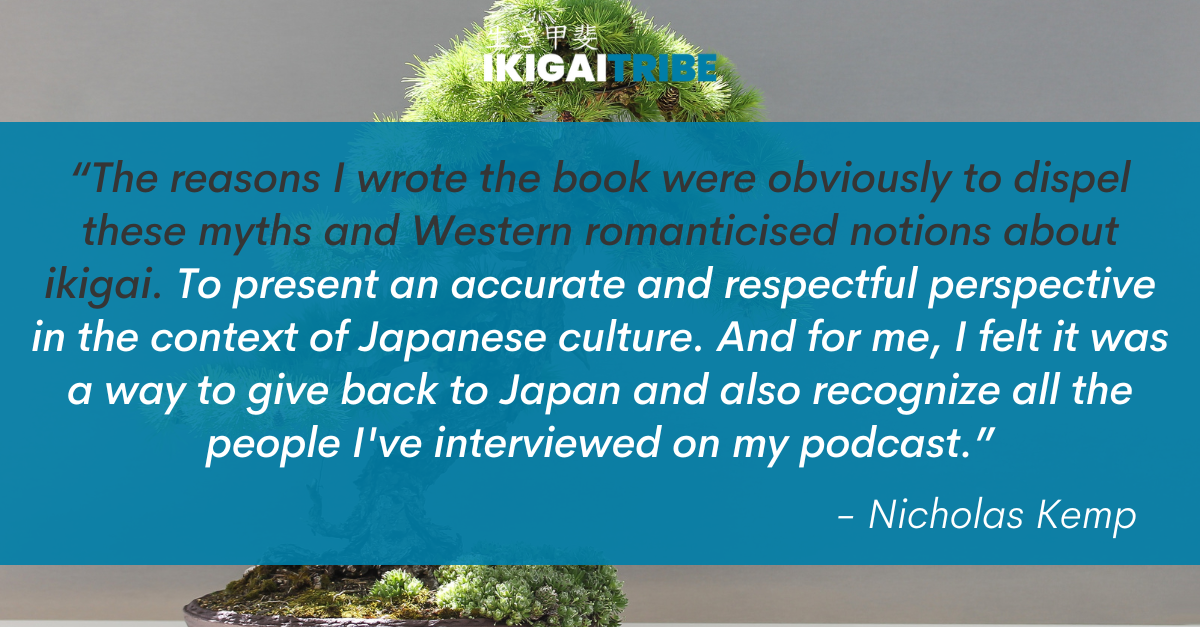 Through his book, Nick seeks to dispel the myths and Western romanticised notions on ikigai and present ikigai in a context that is accurate to Japanese culture. Moreover, it is a way for him to give back to Japan and recognise the people who helped him understand the concept. He also hopes for it to be a legacy he can pass on to his son. Most importantly, he wants to show the readers a different way of thinking and living – an approach to life that can help them feel even more worth living.

The desired audience for the book

Nick’s book is filled with ideas from Japanese researchers and people with great interest in Japanese culture. Hence, he hopes his book reaches people who have a great appreciation for Japan and its culture, especially those who want to have a deeper understanding of what ikigai really is – that it is more than just a Venn diagram, and there is more to learn about the concept. He believes his book is for people who have been wanting to visit and experience the rich culture of Japan; he hopes that his book will take them to Japan and have a glimpse of Japanese culture.

Coming up with the book title

As someone who studies ikigai in-depth, Nick found out about Kamiya Mieko, a pioneering researcher of ikigai, whom he would like to think of as the mother of ikigai. In Kamiya’s seminal book Ikigai-ni-Tsuite (On Ikigai) she described ikigai as something that people feel, thus the term ikigai-kan (the feeling of ikigai). Hence, he chose ikigai-kan to be the title of his book – he wants to highlight that the most genuine thing about ikigai is people’s emotions. Moreover, he chose ikigai-kan to pay homage to Kamiya who deserves more recognition for her contribution to the concept of ikigai. His book cover shows the kanji character for kan which can be interpreted as feeling, sensation, emotion, admiration, impression, perception, and awareness. The kanji reflects the main theme of his book that ikigai is something that people feel.

“Ikigai-kan are the emotions and feelings you experience when you feel that life is worth living. It's similar to Viktor Frankl's sense of meaning from his book, Man's Search for Meaning. And so the most genuine thing about ikigai are our emotions, I wanted to use that title to highlight the theme of the book, but also to pay homage to Mieko Kamiya, this amazing woman, who I think should be recognized as the mother of ikigai.” - Nicholas Kemp 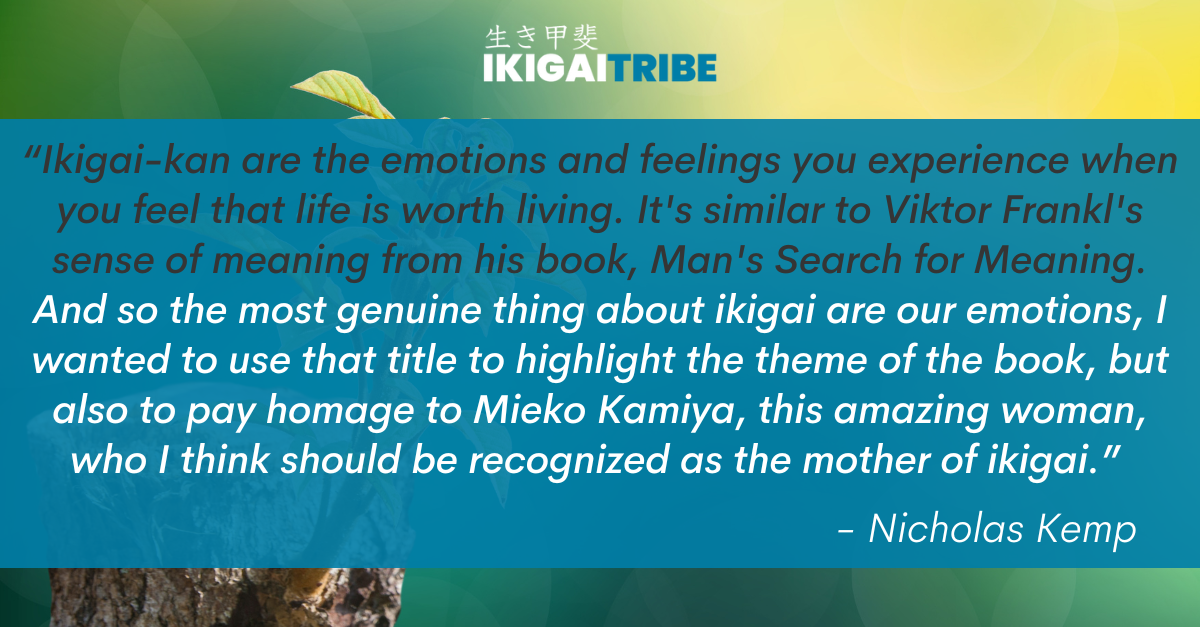 On writing the book

Nick states that it was challenging for him to write his book; he admits to having low self-esteem when it comes to writing. However, the urge to clear the misconceptions about the concept of ikigai was stronger and felt that he had to push through with his book. Throughout the process, he came to know himself better because writing puts him in a position of contemplation and truth – accepting his limits and being honest with himself.

Fortunately, with the help of Caitlin in the editing process, he was able to have his work checked and corrected while maintaining the sincerity of his writing.

In his book, Nick cited many experts that he had interviewed in his podcast. He shares that through Google, he found sites where he can access research papers, which introduced him to some of his guests; he also tried looking for published authors who have written on the subject of ikigai or other related concepts. He thought it would be important to interview English-speaking Japanese or non-Japanese who had studied an aspect of Japanese culture. With that, he was able to interview a diverse group of people from different countries and with different types of expertise. Nick shares that it was a delight for him to listen to different perspectives and thinks that all his guests’ opinions are valid. It amazes him that one word – ikigai – has its connections to all aspects of life. 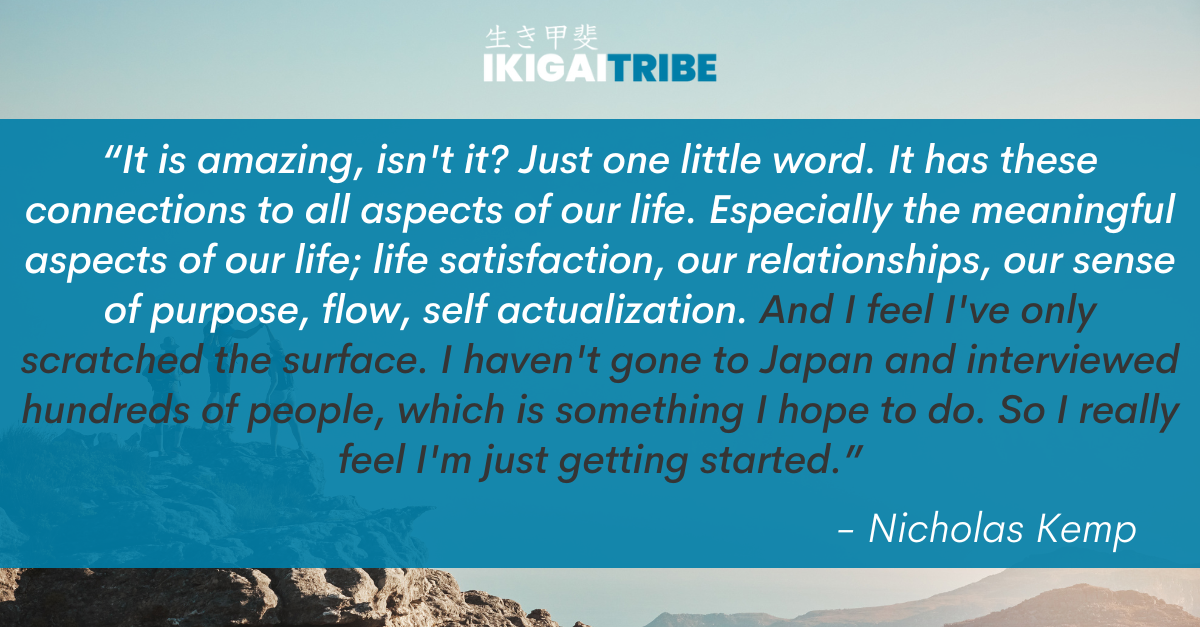 I think if we can remind ourselves to be present, patient and to value the kindness of others or the beauty of nature, then we'll feel that life is worth living. It's good to be alive. - Nicholas Kemp 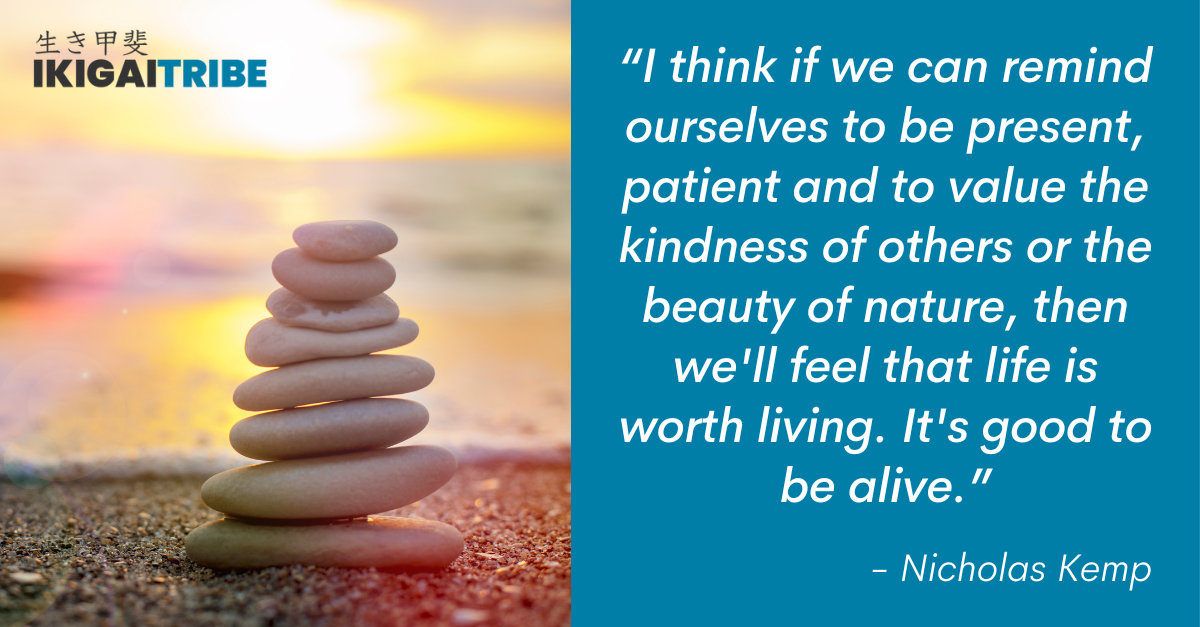 Nick shares some personal experiences in his days when he was living in Japan to some of his meaningful memories with his family that the readers can relate to and learn from. He hopes that his stories will give people realisations about being more present, and learn to appreciate the people around them. He states that sharing his stories gets him emotional because it felt like opening himself up to a huge audience. At the same time, he feels privileged and grateful for all the experiences and people he encountered in his life.

Nick’s book also includes etymological information; he introduces readers to Japanese terms and explains the meanings of kanji to provide context to the ideas that he’s expressing. One of his favourites is shimei-kan (sense of purpose); if people will take a closer look at the kanji characters for shimei-kan, shi is used for the verb tsukau, which means to use; mei means life. Hence, along with kan, shimei-kan can be understood as “the feeling or sense of how you use or wish to use the life that has been given to you.”

Another one is ibasho; it is made up of the verb iru (to exist) and ibasho (place), thus ibasho is a place where people can be their authentic selves. He shares that the word holds a special meaning for him as it represents the community that he built – the Ikigai Tribe.

What to learn from each culture

Nick talks about some differences between Eastern and Western cultures in his book. Being able to experience both, he thinks that there are some things that each culture can learn from the other:

For the Western culture, he thinks that people should learn to talk things up less. One thing he notices in social media is that people in the West are more focused on becoming the best version of themselves; he believes that something that they can learn from Japan is the humility of Japanese people; rather than bragging about themselves, the Japanese people are focused on making their crafts better.

As for Japanese culture, he hopes that the Japanese people can be more comfortable with asking for help. With the rising social problems of loneliness and depression, he hopes that the Japanese people become more open to expressing themselves and asking for help if needed – that there will be more available support services for people suffering from those problems.

Nick shares that his book will become a resource and essential reading for his program; it will give the readers an idea of his certification program. Now that he’s published his book, Nick plans on conducting an ikigai summit where he will be bringing together most of the people he has interviewed. He will be presenting and sharing insights from his book at this summit.

What started from an urge to clarify the misconceptions on ikigai led to an enlightening podcast, building a community, and publishing an evidence-based book about ikigai. Having lived in Japan and created a meaningful connection with its people, Nick was able to share his learnings and experiences – conveying to people what it is really like to feel that life is worth living with the beautiful concept of ikigai.

GET THE BOOK ON AMAZON