Professor Gordon Mathews, anthropologist and author of What Makes Living Worth Living? How Japanese and Americans Make Sense of Their Worlds, believes that it’s all too easy for work to become our ‘de facto ikigai’:

‘Work is famous for becoming what I call de facto ikigai. You may be at a job you don’t like very much, but if you have to be there 10 hours a day, five days a week, it becomes your ikigai. I feel this myself sometimes. I woke up this morning with a dream about my office; that’s not my ikigai! But nonetheless, that shapes me. Obviously, this has more of an effect than I would have wanted to have thought. I’m department chair, so I’ve got to think about things there. So you know, that’s what happens sometimes.'

‘Maybe it's true for any society but in Japan, we also have people who adjust to their social roles, and their social roles become their lives. It's an adaptation, but I think it's also a tragic loss of opportunities. I'm sure in Australia, too, there are people who just become their profession, like bankers and lawyers who choose to just become that profession and nothing more.’

Mogi’s advice implicitly warns against perceiving ikigai as it is represented in the Western Venn diagram model. That model suggests that ikigai is essentially nothing more than a dream job where you are doing something that you love and are good at. However, truly life-affirming work goes beyond this naive and simplistic approach. So how do we move beyond work that we merely love and instead find something that we think is truly valuable?

Work as a source of ikigai

An example I am sure will surprise you is that of a manager of a kodokushi cleaning company. Kodokushi translates ‘to lonely death’. This word is written as 孤独死, kodoku-shi.  孤独, kodoku, means  ‘solitude’, ‘loneliness,’ or ‘isolation’; 死, shi means ‘death’. It is estimated that three men die alone every hour in Japan. Neighbours are usually the first to discover that something is wrong from the smell. Families of the deceased often don't get involved, refusing their inheritance, and not wanting to come clean the apartment.

Masatomi Yokō, president of the kodokushi cleaning company Memories (メモリーズ株式会社), has worked as a lonely deaths cleaner for more than 13 years. He notes that in present-day Japan, as people don’t socialise that much in their local communities, deceased people are not found right away. Having to face the prospect of cleaning the apartment where a body has decomposed is understandably something he struggles to process with every cleanup job. He is often filled with fear when entering the apartments of the deceased.

As a manager, when one would normally be happy to receive a phone call to their workplace, he knows the news will be grim, resulting in mixed feelings. However, after witnessing the grief his mother went through when having to clean out the house of her mother who had died suddenly, Yokō realised the work of a lonely death cleaner could be helpful and socially useful. Feeling that his grandmother, through her death, had shown him the way, he started working as a lonely death cleaner finding that the work suited him.

Wanting to do his job to the best of his ability has become a source of ikigai for him, giving him a sense of purpose and satisfaction. Feeling that he can hear the silent voices of the dead through the objects he removes, often finding photos of the deceased and their family, Yokō finds himself wanting to apologise to those who have died alone and were found late. In his thoughts, he tells them: ‘I’ll clean it all up, and it’s going to look tidy.’

Fully sensing a connection between himself and the dead by sorting out their possessions he feels it is a spiritual experience:

‘Only by putting their house in order do you realise they’re really gone, and your memories of them are all that remain. There won’t be another time to think about it.’

This is probably not the sort of work you would identify by using the Western ikigai model to guide your decisions, but it is ultimately far more important and beneficial.

In Japanese, the verb for work is hataraku, written as 働く. The phrase hatarakigai, 働きがい, is used to indicate ‘work that is worth doing’ or ‘work motivation’. We can understand this word as work-related sources of ikigai. What is important to understand is that this often involves engaging in work that is both challenging and demanding; not always enjoyable, but ultimately satisfying.

If we are mainly interested in work for the purpose of making money and accumulating wealth, then it is almost certainly not a source of  ikigai. Ikigai-kan in work settings is not about success or financial gain, but about helping others and benefitting society.. The former creates a system that is cold and unfriendly, but the latter facilitates warmth and connection. 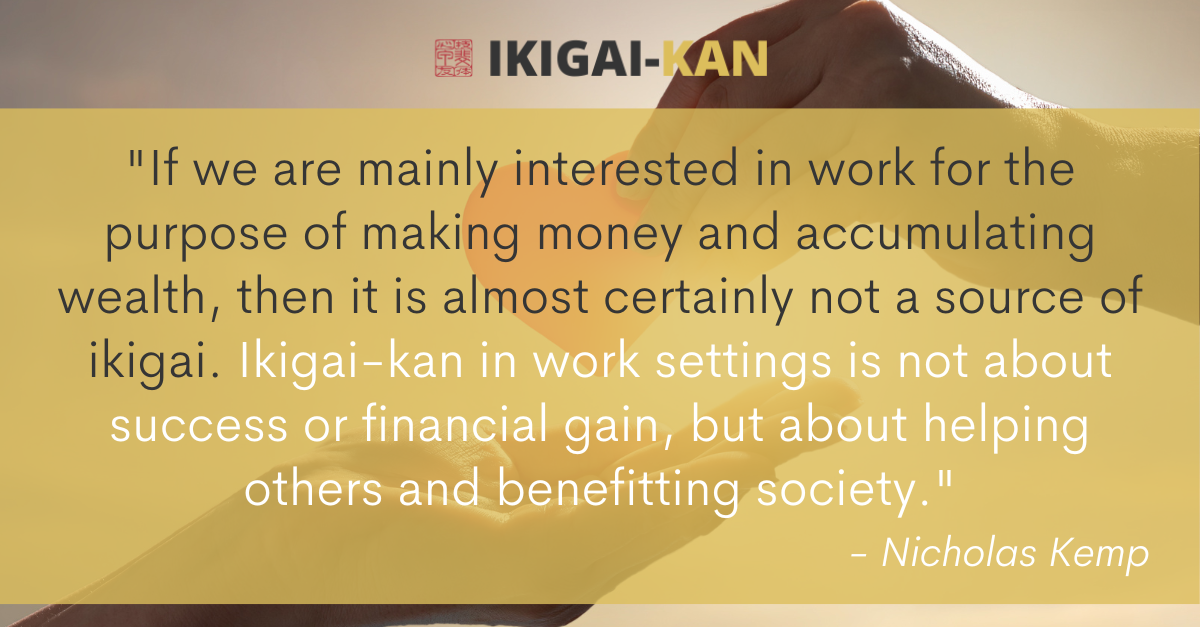 This suggests some points of reflection about the relationship between ikigai and work:

Work is important, and doing meaningful work is satisfying; for this reason, work – or an aspect of it – can be a source of ikigai. However, it is not healthy to prioritise it over other ikigai sources – especially relationships. In the grand scheme of life, grandparents and parents will pass on, children will grow up, life will steal time away from friendships, your most precious life moments will happen only once. You will regret missing these moments, transitions and milestones if you sacrifice them to work – but you will almost certainly not regret not working more.

Remember that the word ikigai contains the verb base iki, from the verb ikiru – meaning to live. This is a great reminder that ikigai involves all aspects of your life – not just your work.

You don’t want work to be your only source of ikigai – e.g., where you pursue it to the exclusion of relationships or hobbies – but you do want to do work that is meaningful, that makes you feel like you have made a good investment when spending time engaged with your occupation. You want to experience hatarakigai-kan, the feeling that the work you do is worth doing.

Hatarakigai-kan is the ability to feel a sense of accomplishment, fulfilment, and growth in one's work life, as well as the full exercise of one's abilities. These are important components leading not only to job satisfaction, but overall life affirmation. They are indicators of success that we tend not to value as much as working hard or ‘hustling’, achieving success in the form of promotions or increased job responsibility, and being financially free.

In the context of their study on Japanese teachers, researcher Mino Yosuke explained hatarakigai as follows:

‘...”hatarakigai” is a phrase peculiar to Japan, which shows the state of feeling satisfaction and value by working and performing duties, a generic term of the psychological state that arises in situations relating to working, and an approximate concept of work motivation theory. In other words, “hatarakigai” is considered to be “a positive on-the-spot and on-going psychological phenomenon” regulated by internal and external factors of motivation.’

It is important to understand that hatarakigai is a balance of both intrinsic and extrinsic motivators. It is all too easy for us to do work that is merely a means to an end, rather than something that we are intrinsically motivated to do because we find value in it. 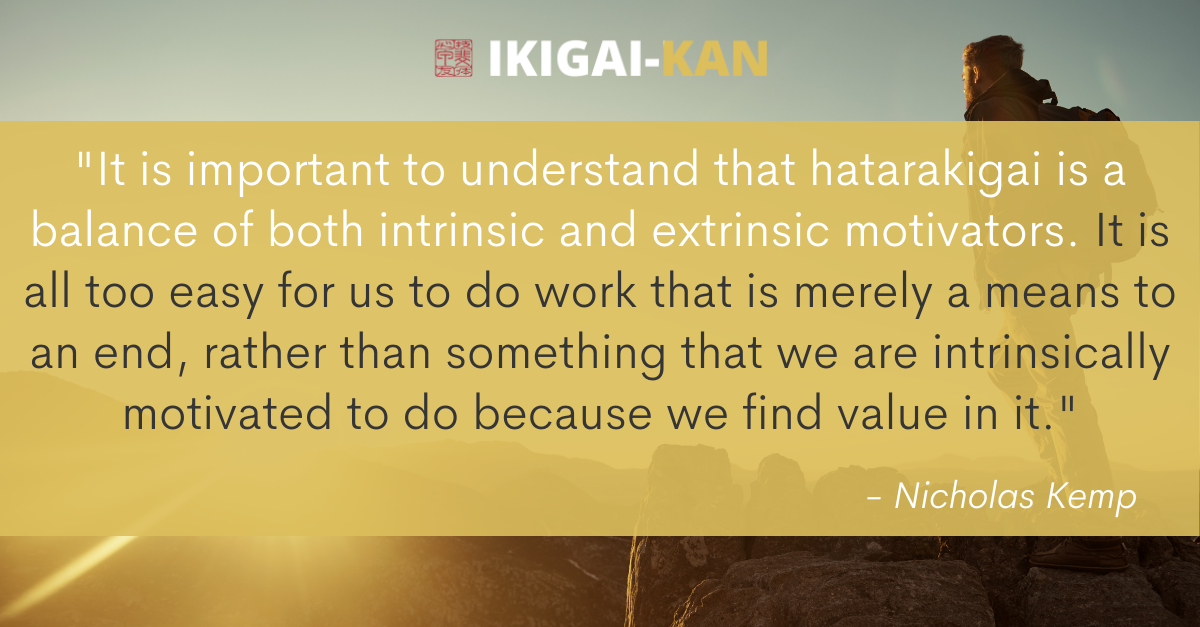